Home / Office / How to Apply Removable Wallpaper – An Office Update!

When we last left off, my basement office was… white. ha! But you can see all the inspiration I had for it in this post. I’m so excited! 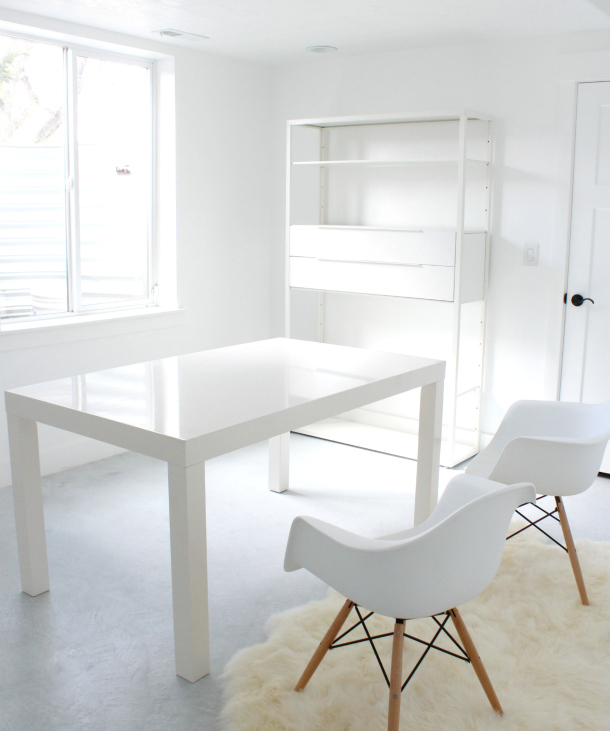 Okay, so like I mentioned before, while shopping Joss & Main not too long ago I came across this fab, speckled removable wallpaper, and I knew I HAD to have it 🙂
(yes, I have an obsession with this website, I know) 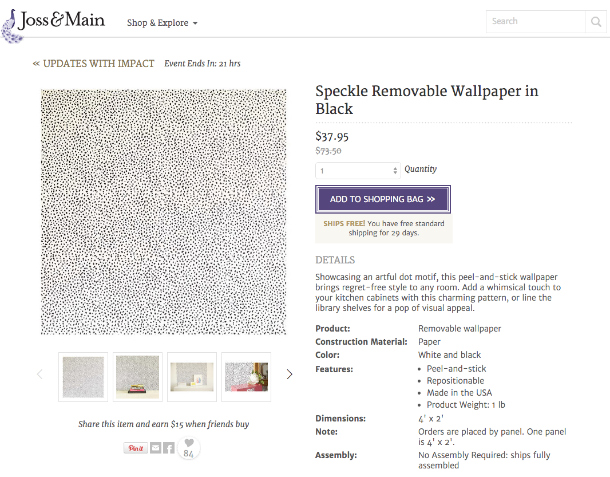 I ordered my paper from here because I had some store credit I needed to use, but Chasing Paper sells LOTS of great removable wallpaper designs, and is even a couple dollars cheaper.
So there were a few things I loved about this removable wallpaper idea:
1. It’s not permanent.
2. It’s easy.
3. It could make a big impact. 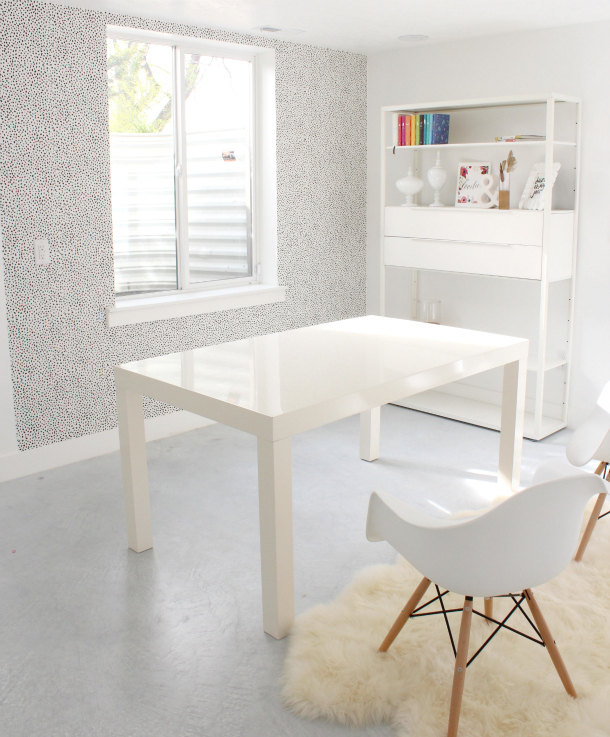 I la-la-la-love it!
First of all, I was really happy that the paper was actually black and WHITE… and not black and cream. I was a bit worried when I first ordered it.
Secondly, putting up this paper was straight forward enough… but tricky at the same time. Here’s what we used and how we applied everything. I thought it might help, because this stuff isn’t cheap, and you want to get it right the first time. 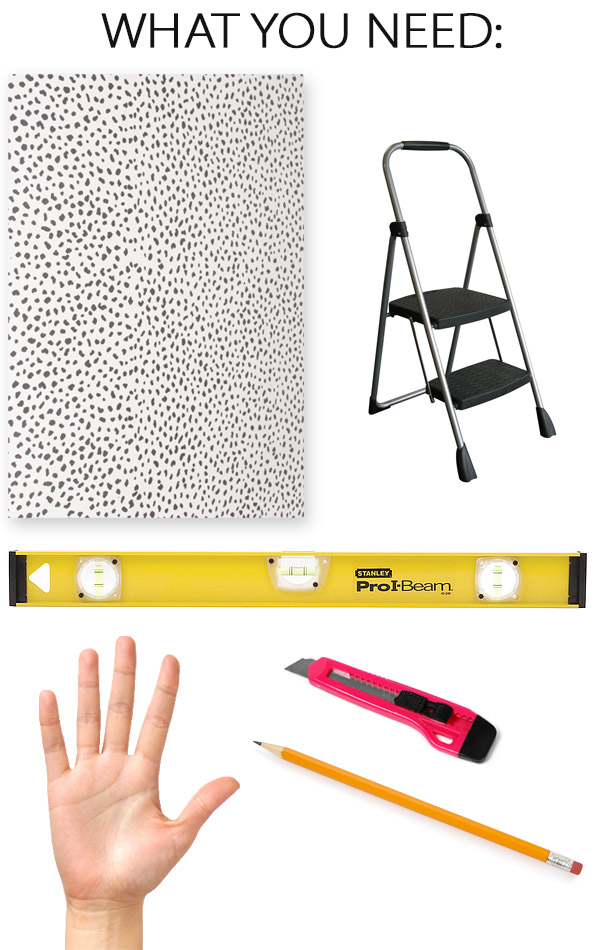 – Removable wallpaper of choice
– A step stool
– Level
– Scissors or box cutter
– Pencil
– An extra hand… or two 😉
The wallpaper will come with two layers. The actual paper itself, and then the backing that keeps the sticky portion from being exposed.
Measure the space where you’re putting your paper and make cuts BEFORE you remove the backing. Duh… I know, but I just wanted to put it out there. ha!
We also made sure to flip the wallpaper over to the backside to draw our measurement lines, so that we didn’t have any pencil marks on the nice designed portion. The great part about OUR particular wallpaper design, is that it was SUPER forgiving. You might have to go with a different measuring technique if you have a very stubborn pattern that needs careful lining up. (good luck!) LOL.

The level itself wasn’t necessarily used for leveling anything, as much as it was handy for making those really straight, long cuts.
Once we were ready, we peeled off the backing, and both held the paper at one end. Cason would place the top portion where it needed to be, and then I would line up the rest.
It took a few tries, but since this material IS removable (much like vinyl) you can reposition it – BUT… it is VERY sticky. Make sure NOT to let it fold over on itself, it was almost impossible to pry apart, and we even messed up a large sheet due to some tearing while trying to manipulate the sticky paper 🙁 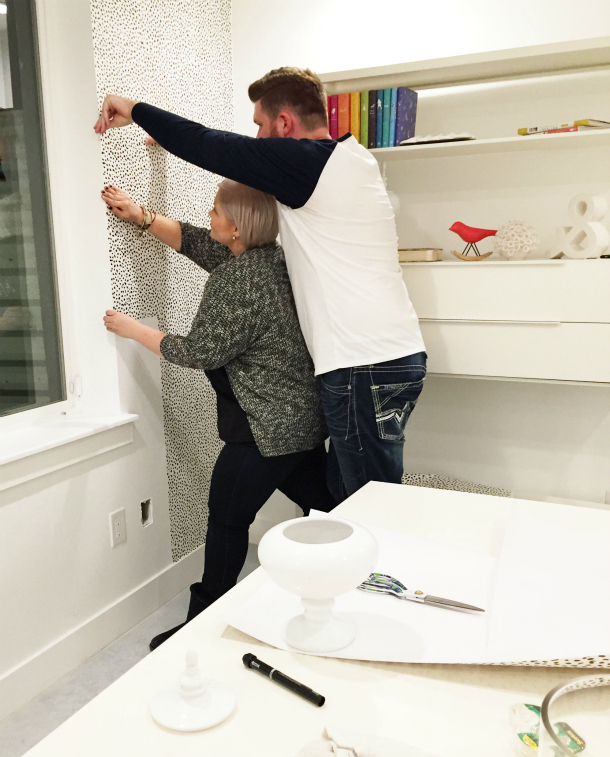 PS: you might want to partner up with someone who you feel comfortable enough with gettin’ REAL close to. haha! To position the paper straight and where it needs to be, you sort of have to be all up in each others space. Oh! – and a height difference doesn’t hurt either 😛
After you’ve applied your piece of wallpaper, try to smooth it from the middle out, to avoid any big air bubbles or wrinkles.
Once we got the hang of everything, the application for the paper went really fast. There were portions that had to be cut out for the outlets, but other than that, it wasn’t too bad.
We were a handful of sheets short when it came to finishing the whole wall, but I ordered more so hopefully I can finish next week… I just couldn’t help but share the portion that we DO have done! 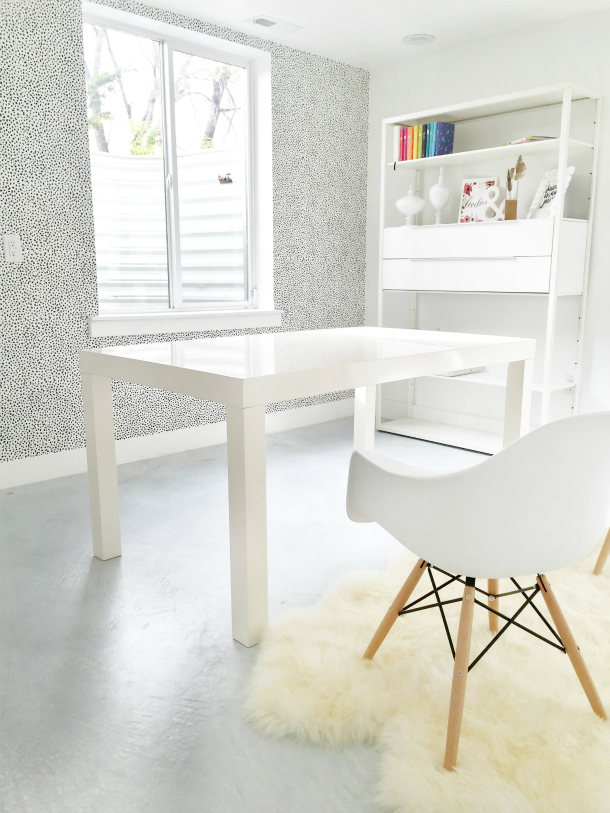 I’ll be back with an update once the entire wall is finished too, so keep your eye out!
xoxo
Chairs: Joss & Main
Table: Down East Home (slightly damaged product section for $200), but it’s West Elm
Rug: Costco
Bookshelf: Ikea
Books: Puffin Classics

I am SO thrilled to be collaborating with @shineco