Home / Basement / Gold Wallpaper & Thoughts on Decorating with a Spouse

I promised I’d be back with a wallpaper reveal, and even though I just snapped these pictures really quick, and they’re not the greatest, I still wanted to show you how our funky little accent wall turned out in the basement!
We ordered our wallpaper from Hygge & West. I literally just googled “Gold Wallpaper” and a few images popped up. I followed a couple of links, and about 4 or 5 in I found this little nugget. 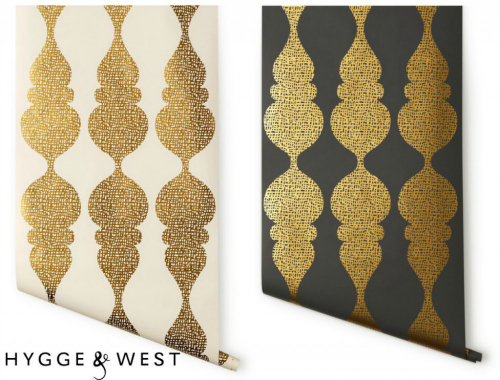 I fell in love at first sight, and knew this bold pattern had to make its way into my basement.
Let me stop here and say… this stuff is expensive yo! I prodded around the internet looking for a coupon and finally found one that wasn’t expired. I think I got 25% off of my order and free shipping, but still… I definitely had sticker shock when I realized how much wallpaper (in general) really is!  So, that being said, you can only imagine that the two rolls I DID purchase, were definitely being put up by a professional.

We used Rick, who was referred to us by a designer friend, and he did an AMAZING job. Just glancing at his tools alone, was worth the fee of him coming out to put this gorgeous wallpaper up for us. I’m here to tell ya, Wallpaper’n ain’t no joke! There’s some serious science behind applying that them there patterned paper (especially the kind that isn’t pre-pasted)! There was NO way that we could have done this project on our own. I would have been in a corner, curled in a ball, rocking myself back and forth if I would have tried. 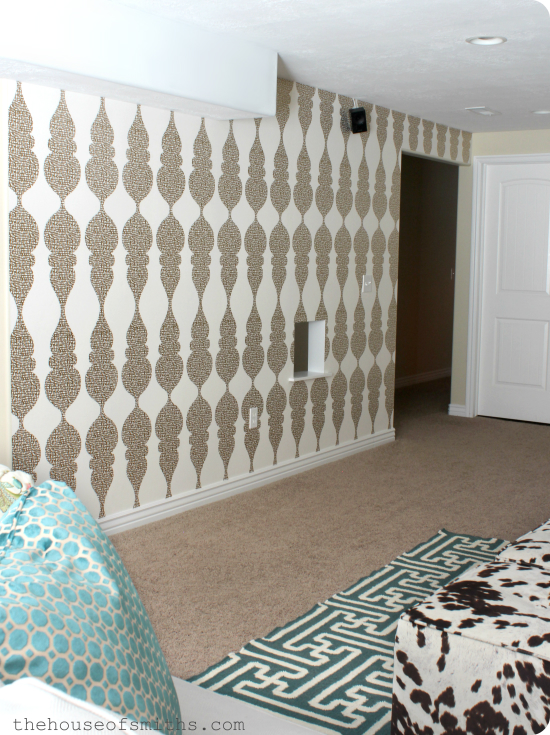 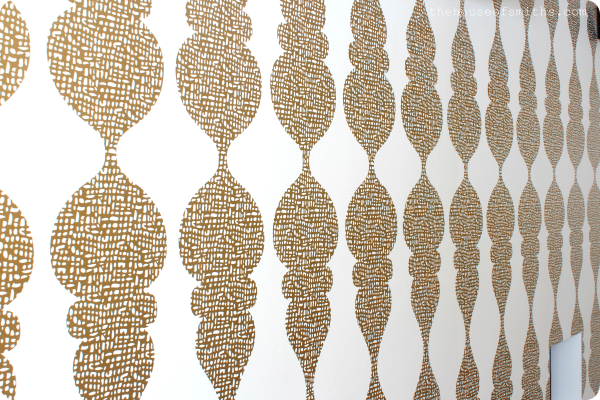 As you can see, it’s a little crazy, a lot different… and we LOVE it!
We’ve already gotten mixed reviews about it from friends and family. Some adore it, and some secretly hate it, saying things like… “Ohhh, that’s… nice” or “I’m glad you like it!” haha! But one things for sure, it’s a conversation starter!
🙂
While we’re in the zone of un-staged, not-so-well-lit pictures, I wanted to share our little bookshelf at the bottom of the stairs too! We purchased it from Joss & Main, and we’re dedicating this spot to all of our family’s memories. Project Life albums, Smash Books, bins of printed Instagram photos… whatever it may be. At Cason’s request, we’re pulling out all of our memories from the computer and our phones, and we’re stashing them in one place so that we can have them readily available to enjoy. 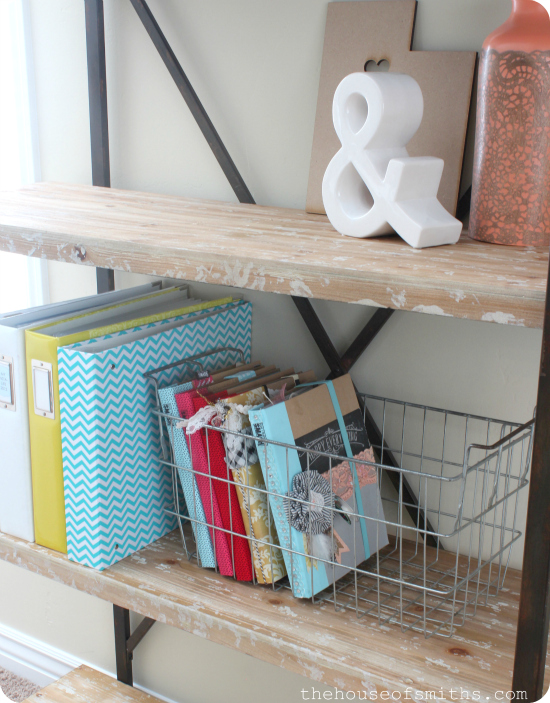 Oh! Also, I wanted to address a comment we got on our last basement update post.
It was this one here:
I know there are a lot of girls in your house… and I don’t want this to sound mean. It is not my intention at all, don’t get me wrong…. but…. I thought the basement was going to be Cason’s man’s cave? The couch, pillows, lamp… are simply beautiful…but I thought for some reason it was going to be a little bit more masculine?

Maybe I should have explained Cason’s term of “A Man Cave” a little better…
As I’ve mentioned before a little in this post and this post, while lots of men are super interested in things like sports, video gaming or hunting… mine loves traveling, music, cooking, being a Dad, design, DIY projects and gadgets.
While I agree, coral and gold may not feel very man cave-ish to most, the entire color scheme alone, lends itself to a more masculine feel… and let’s not forget all the metal pieces and that ridiculously bigger-than-we-need TV, ack!
I guess you may be right, if you take our main living spaces, and put them together side by side, you DO still see a lot of similarities. 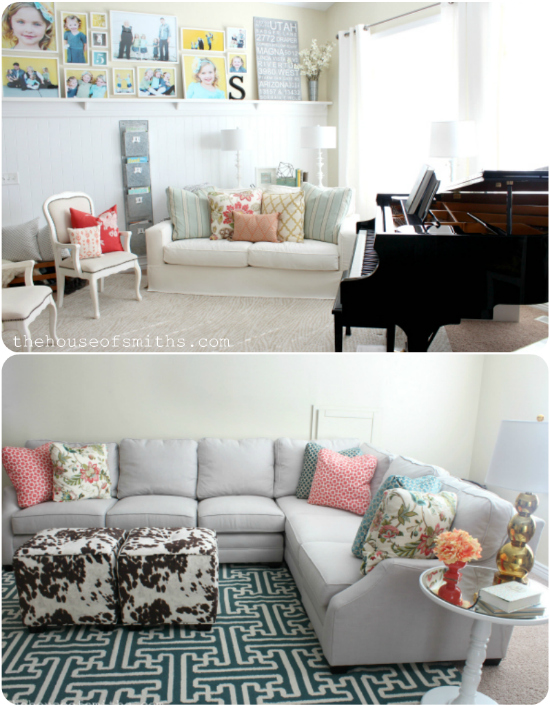 But ya know what? I think that’s what decorating and designing together with your spouse is all about. Finding a middle ground. A little push, a little pull, right? You get the mother-of-all TV’s, I get a few freakin’ floral throw pillows on the couch to bring all these crazy colors together, and a gold lamp.
Compromise. see?
🙂
Cason will never want a taxidermy deer head (is that how you say it?) or sports paraphernalia on our walls, but a dark colored rug, cowhide ottomans and gadgets that get in the way of pretty wallpaper? (ugh, silly little speaker) 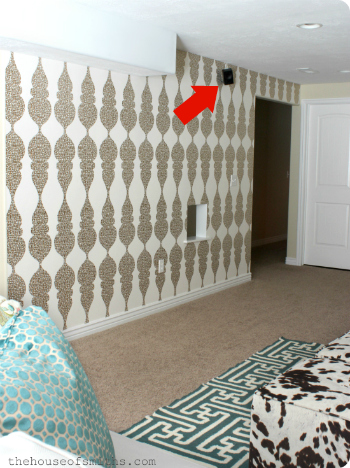 … yeah, he’ll want all that.
And I’m happy to give it to him! because this space is just as important to him, as it is to me. PLUS he’s been so great at letting me call most of the shots with our upstairs space.
I hope that explains things a little better. He’s certainly a unique kinda guy… but I love him even more because of it.
Now, speaking of TV’s, here’s a few shots of what else still needs to be done in this space.
I’m trying to be better at posting the process along the way, instead of just waiting till the room is all done, so be patient with me. ha! 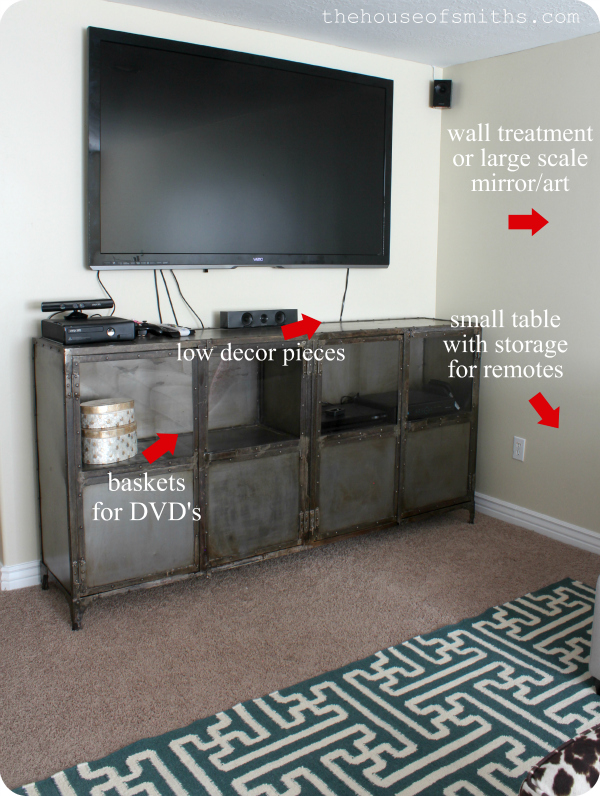 In true “House of Smiths fashion”, if you follow us on Instagram, then you know we’ve already gotten sidetracked working on our master bedroom upstairs, and are now budgeting for things in that space… 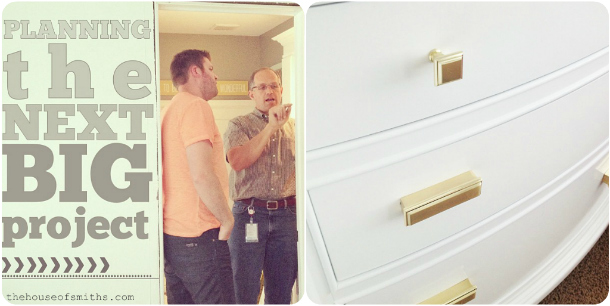 but I’m always on the lookout for the other pieces I’ll need for the basement as well. For us, decorating a room doesn’t just happen overnight. It takes lots of time trying to find the perfect elements to make a space one that we LOVE!
For now, we’re just thrilled to have the most important elements of the room all in place… and yes, that includes “the BIG TV” with Just Dance on it, for the kids and their friends. We may not know how to actually work the controllers very well on that X-boxy thing… but we can definitely throw some killer dance parties with it, once we figure out all the initial set-up steps.
🙂 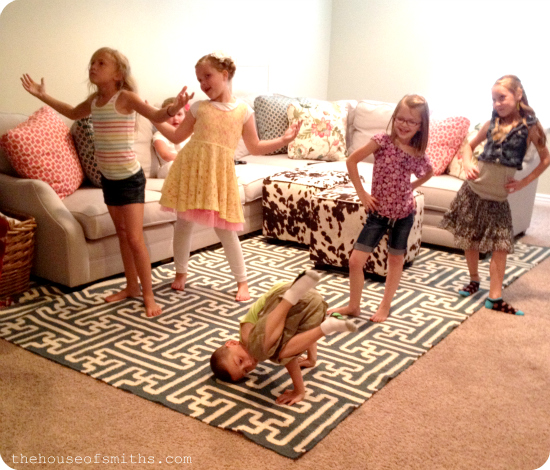