Home / Crafts / DIY Mini Photo Album Gift Idea
Cason’s Grandma’s birthday was a few days ago, and her cute hubby decided to throw her a surprise 75th birthday party. Cason adores his grandparents and wanted to give his Grandma something really neat on her special day. Of course, this required planning… something that I stink at. Cason had actually already recorded our kids and him playing the piano and singing her favorite songs on a CD for her, so she could have them to listen to all the time, but he had also asked me to print out pictures for her to have as well.
Initially I had planned on ordering one of those online photo books, but I ran out of time, so here’s what I came up with instead! 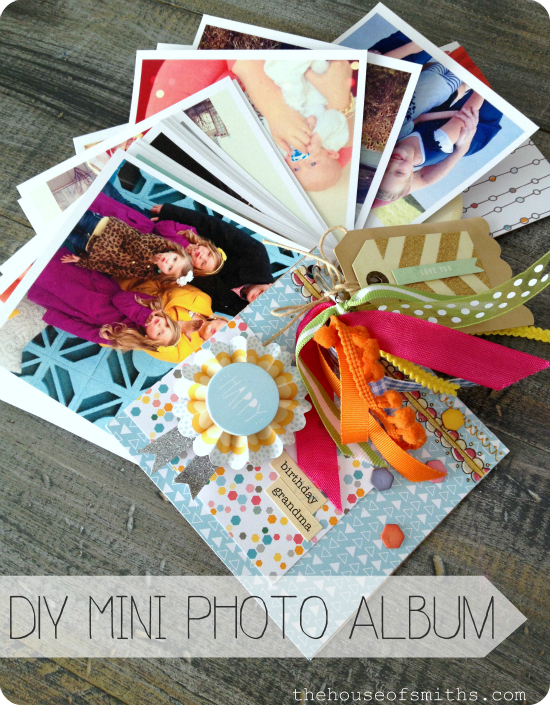 A DIY mini photo album
I knew I had all of the components to make something on my own, that would be just as cute as any sort of super expensive online photo book.
I have a crazy, hoard-like stash of American Crafts supplies that are daaaaarling, a bag full (literally) of awesome Persnickety Prints that were just waiting to be used and some extra loose-leaf paper rings laying around. All the components to make a fun little flip-book type album. 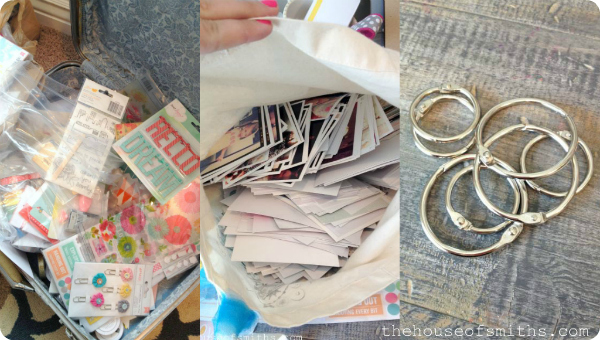 I used some chipboard as a base for the front and back of the book, covered it with paper and embellishments, hole punched each photo in the corner, strung the entire album on the ring and that’s it! 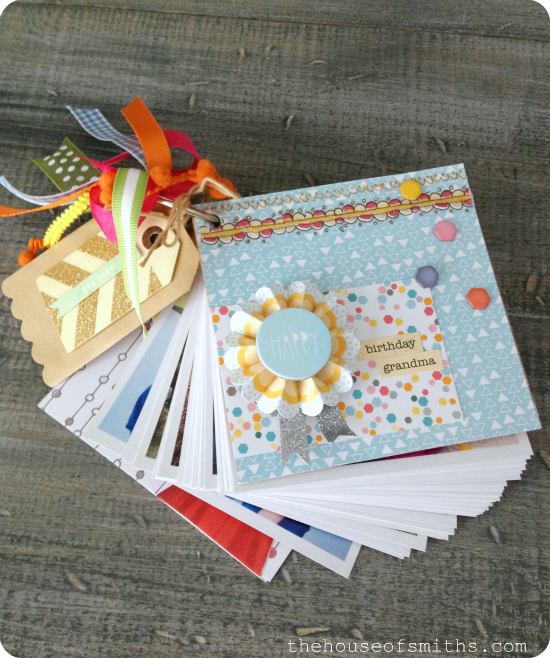 I had Cason write his Grandma a little note on the inside cover to personalize it some more, and also added this little vintage cutout lady from an old dress pattern package that I had on the back, because it reminded me of a picture I’ve seen of Cason’s Grandma when she was younger.
🙂 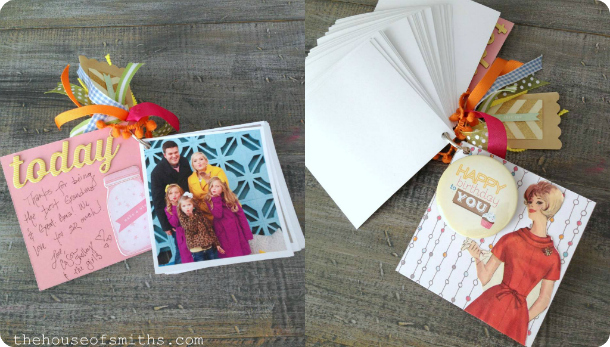 It was fun to see her open her gift the day of her birthday, and flip through a few pictures, all while Ooo-ing and ahww-ing through a couple. 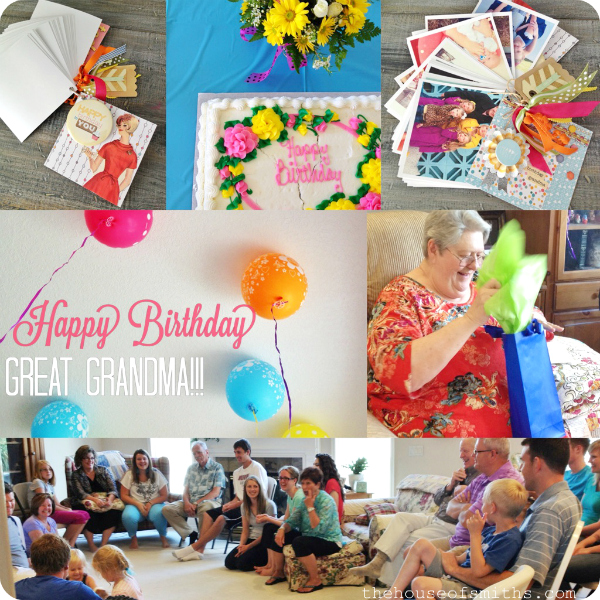 I don’t know about Grandparents in your family, but my Mom and Dad, and me and Cason’s Grandparents adore little “coffee table albums” like these. They’re perfect for showing off to their friends and other family members when they come over, and fun to have for lots of years to come. 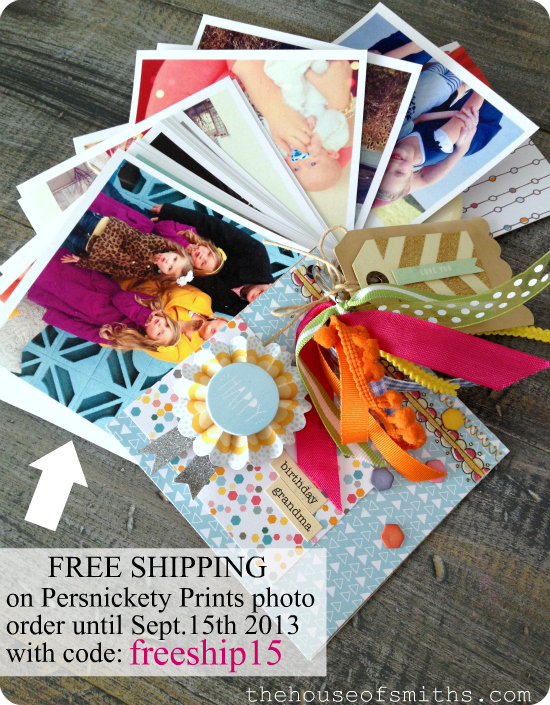 I know we’ve talked a LOT before about using Persnickety Prints for printing all your Instagram photos, and this is why! When you have these awesome printed photos on-hand, you can do SO much with them! Remember our Instagram photo wall? Regular photographic paper 4×6 photos would have been okay, but the hard, square, pearl card stock that these were printed on just made the album that much more special AND durable.
There’s a deal going on right now, that if you order over $15 worth of prints from Persnickety, you can use the code “freeship15” to get free shipping on your next order through September 15th 2013. So make sure to use that if you’re needing prints because it can save you about $5-$7.
Oh, and before I go I also have to show you this little gem that I was pretty proud of. As we were running out the door (late of course) I realized that I didn’t have a cute gift bag for the present. So in a hurry I grabbed one of these white .10 cent Christmas clearance bags that I stocked up on last year, and just put a bunch of these awesome transparent stickers on the front. Thankfully I DID have tissue paper left over from something else. whew! Cute, and pennies, compared to anything else I would have had to buy! 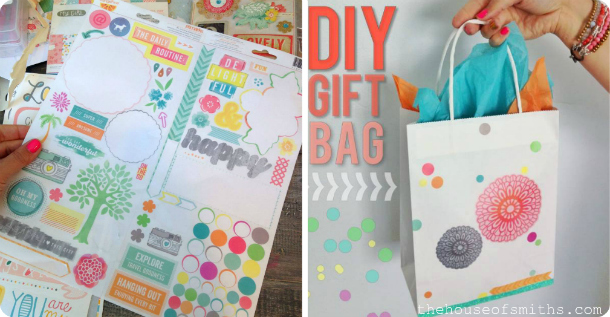 Okay… now, it’s time to clean up around here. My office looks like a bomb went off in it, and it’s been about 3 days since the actual party. ha!
I swear, THIS is why it’s hard for me to go from one project to another. Even just doing a mini photo album makes THIS kind of mess, so I’m sure you can imagine what remodeling an entire room looks like for us most of the time. yeesh!
There should be a rule: If you create something awesome, you shouldn’t have to clean up after.
🙂 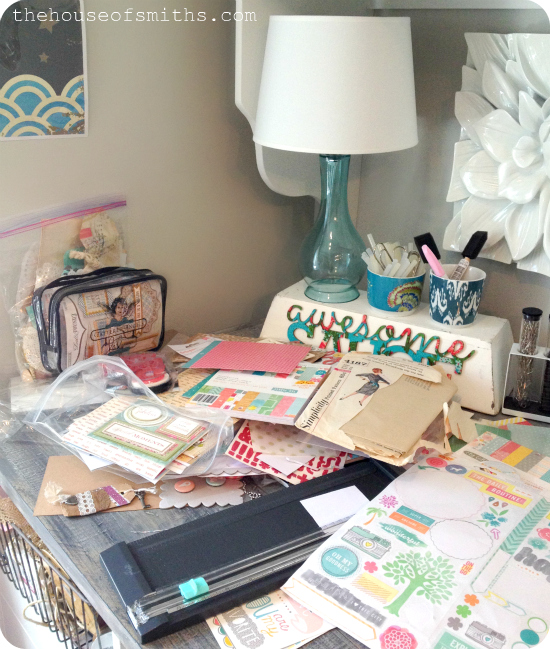 Previous Post: « A Few of My Favorite Things – Midyear Mashup
Next Post: Embracing the “Dog People” Way of Life & Installing a Doggy Door »