Home / Decorating / DIY Orb Chandelier Tutorial – Zgallerie Eclipse Knockoff
Jen from Tatertots & Jello and I have been friends for about as long as we’ve both been blogging. I remember the first time we met… and ironically, it was over a lighting fixture exchange!
Who knew that over 3 years later we’d become the best of blogging buddies and life-long friends (???) It’s so crazy how life works, isn’t it? 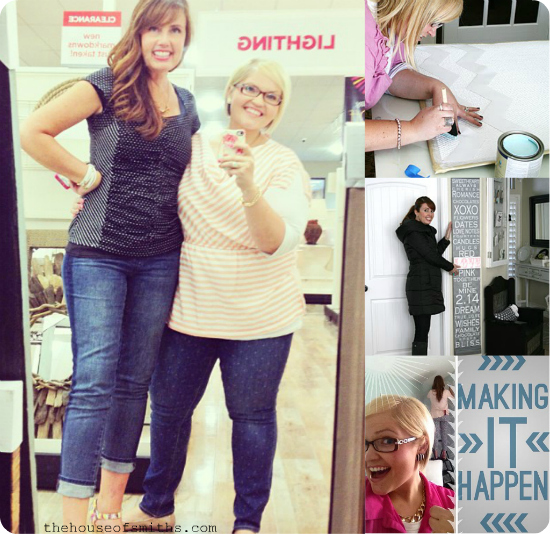 From painted chevron rugs to Valentines day subway art and even a little help with a bedroom makeover (soon to be revealed on Jen’s blog), I’ve had a BLAST working with this super-talented-creative-mega-mind friend of mine, and hope we NEVER stop collaborating on awesome projects together.
All that being said, about 2 months ago Jen and I were laying around in a hotel room, during a blogging event, talking about things we wanted to still get done in our homes, and we both mentioned how MUCH we really wanted one of those cool orb chandelier lights that we kept seeing around in all the high-end stores. If we saved, we knew we could probably afford one, but neither one of us felt like spending over $500, or DOUBLE THAT on a single light fixture was really the best place to put all of our hard earned cash.
So what do you do when you can’t find something that you WANT, at the price you NEED it to be at? You MAKE IT of course! 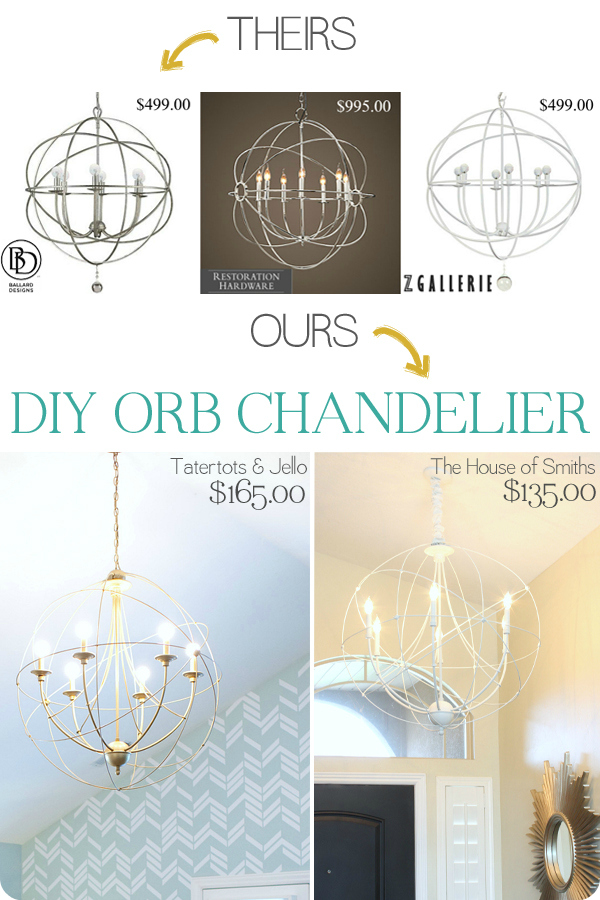 I definitely have to give Jen all the credit when it comes to material choices and basic construction of this awesome DIY orb chandelier. 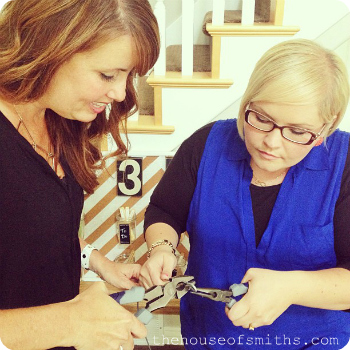 PS: This is my “things are gettin’ serious here” face.  ack!

Jen and her smarty-pants hubby Jeff figured out how to get the orb shape we needed, and then once we had the basic idea down, Cason and I were off to figure out how to construct our own… in a smaller version than Jen’s with a little bit of a different twist. 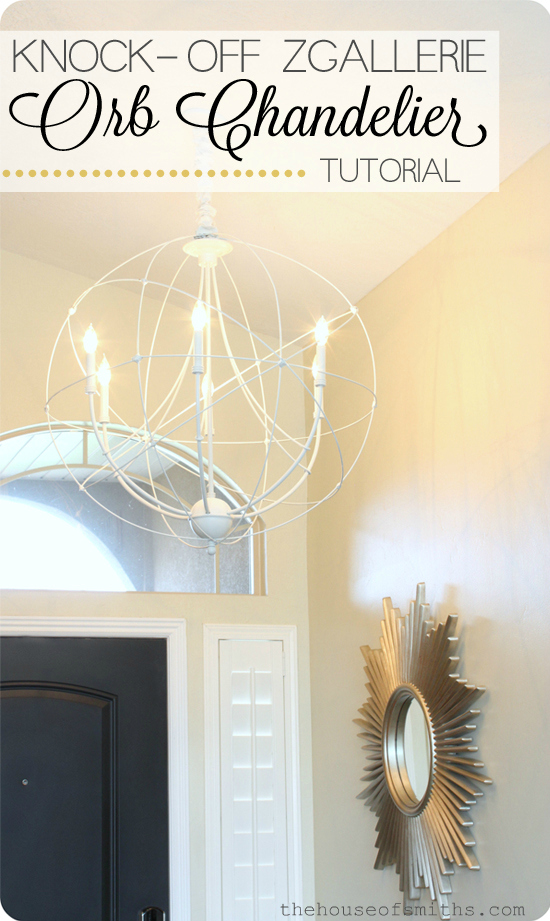 Here’s how we did it:
We bought our chandelier base from Home Depot. It’s called the Charleston 6 light chandelier and it was $95.00. (Jen’s was a bit larger and ran about $120.00) 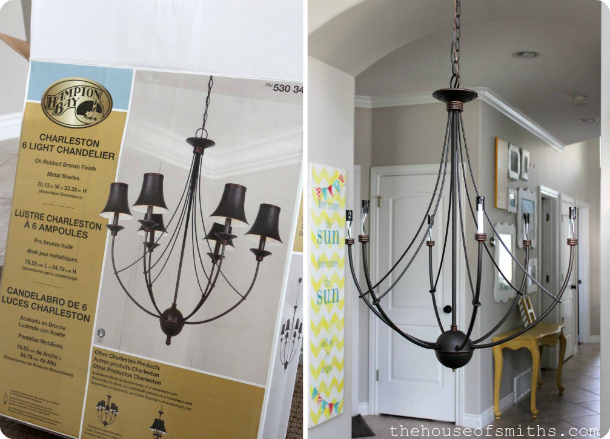 After we had the light constructed, we looked at the overall size of the store-bought chandelier, and then measured about how much bigger we wanted our entire light to be from end to end. We went with about 30 total inches, so that meant that we needed to cut our wires double that size, to wrap around the entire chandelier. (so 60 inches long, or a 30 inch circumference) 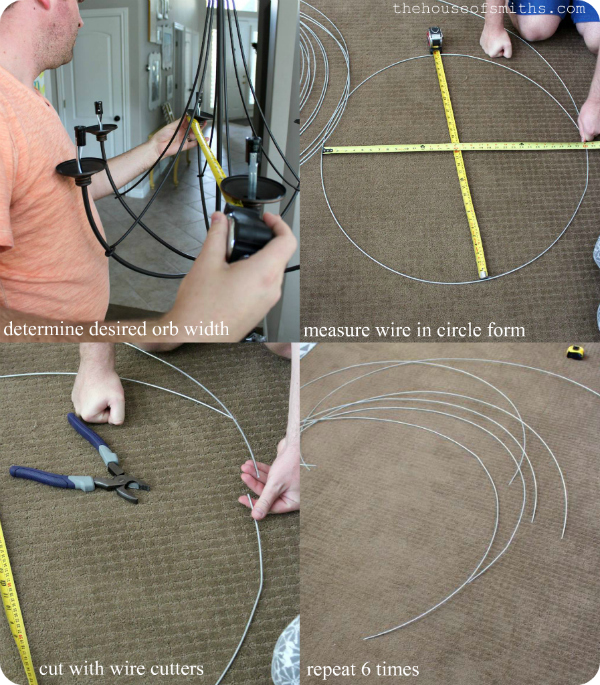 For the wire, Jen and I used the thickest, yet still most pliable material we could find, and that happened to be high tensile wire. The kind you typically use for fencing. You can find it in your hardware store, next to the chicken coup wire. It comes in a large coil and it’s HEAVY, so keep that in mind. 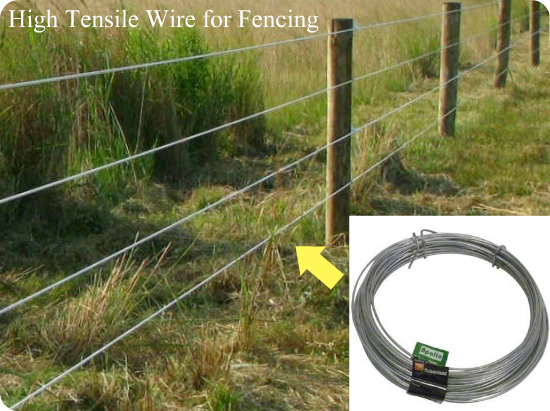 Before we attached any of our large wires to make orbs, we bent about a 4 inch piece of the wire around the top of the chandelier, so that we would have something to hook the other orb wires into, once we strung them. You can see in the layered image, how it’s useful once the other wires are in place. 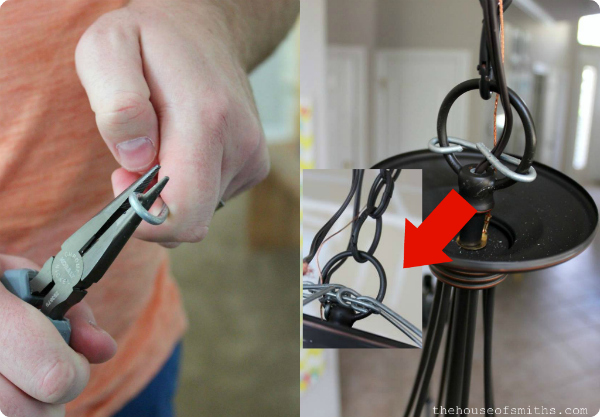 Once we were sure on the size of the overall orb/circle we wanted around the chandelier, we bent either end into a small hook, so there was something to hold it in place.
TAKE NOTE: Your measurement will have to include enough on each end for bending as well, so add an inch or two to make room. 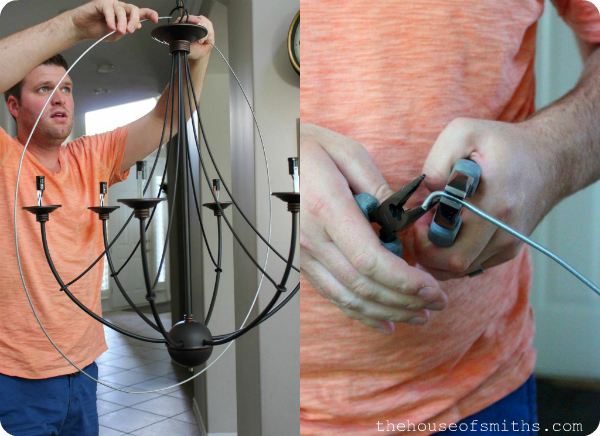 Once you’ve got your first three, and most important wires in place, here’s how it will look.
(see first image)

Don’t worry, it DOES look droopy, but that’s only because you are going to have to manipulate/bend that wire a bit into a more circular shape, to get it to round out some more. But even THEN, you’ll need to make some adjustments, and I’ll talk about that more in a second.
This light is going to be pretty dang large and you’re going to need to hang it from somewhere high so that you can work around it. At Jen’s house we had the chandelier suspended over her staircase, and then at Cason’s parents house we hung it from a hook on the ceiling. Just know that it’s going to be almost impossible to work with this light when it’s sitting on the ground, so find SOME way to get it hanging. 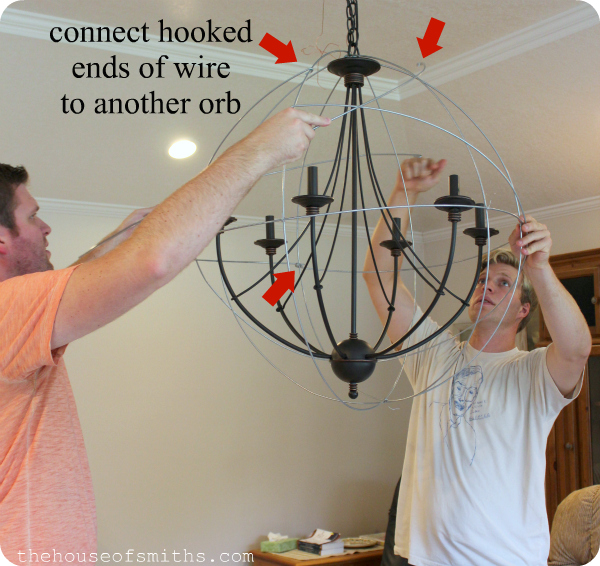 In the end, you should have your 6 wires in place. Your first three wires are the only ones that should be attached to the TOP of the chandelier, like so… 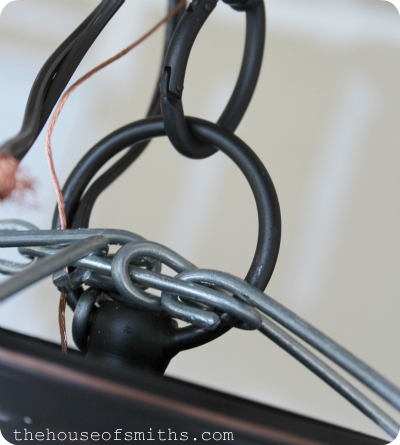 The others will be looped around those three bases, to create the orb shape.
If this seems like it’s getting confusing, I’ll be the first to admit… IT WAS! This ain’t no easy lil’ DIY project. It took some serious thinking and strategizing, but hopefully now that I’ve got this little diagram to share, it will be a LOT easier for you! 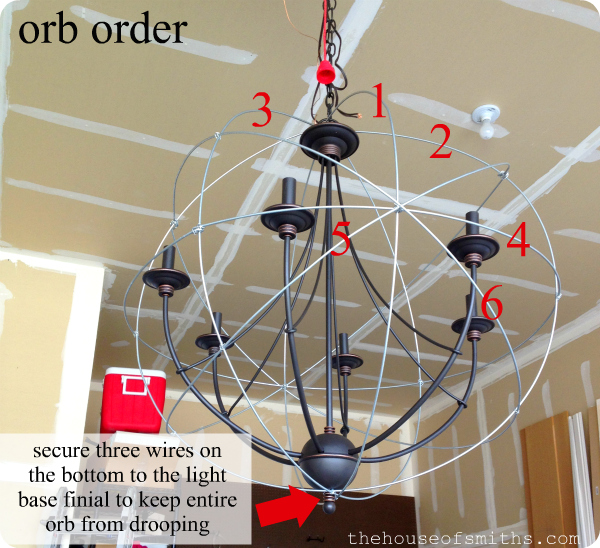 You are going to place your 6 wires around/onto your chandelier in this order (or at least that’s how we found it the easiest). Once they are on, you’re immediately going to feel frustrated. haha! Don’t worry, that’s where picture hanging wire comes into play.
First, secure wires 1, 2 & 3 into place, by wrapping wire around the bottom where they meet, and connecting it to the small space between the final of the chandelier and the large ball where the arms of the lights attach. This will hold up your entire orb and give it it’s stability and nice, round sphere look.
Then, hook wire #4 around those first three wires, to basically give it a “belt”. It will hold those three prior wires more still. Once #4 is in place, use 18 inch gauge wire to tightly secure any connected points, so that everything stays together.
Then add wires #5 and #6 to the party on a diagonal, again, securing any overlapping wire points with the 18 gauge wire.

NOTE: This will NOT hold your wire completely in place. You will still have to deal with it slipping and moving around a little, but if you use enough wire and secure it onto each joint tightly, it should hold it securely enough for you to be able to move things around and play with the spacing of all the different wires, until you get it perfect.
Once we had the orbs shape and spacing around the chandelier to our liking, we started looking for our soldering gun………………. once we realized that we weren’t cool enough to own one of those, (and no offence, but neither was a typical, everyday home DIY’er) we turned to plan B, metal tape. 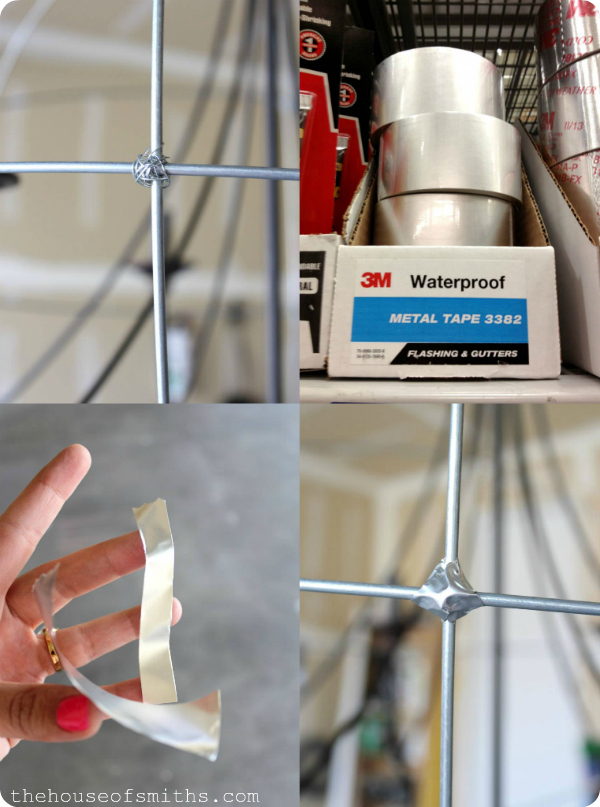 Yeah, it’s kinda crazy, but if you can figure out a better way to hide that wire and give the orb a smoother more finished look, that actually holds, WITHOUT a soldering gun?… please, feel free to do it!
Really, the tape worked awesome because it’s super sticky and just locked all the wires right into place. It was a little pricey and came in a big, thick roll, so we had to cut it lengthwise to get the width we needed… but it was totally worth it.
Next, it was time for paint. BEST PART EVER!
(because it means you’re almost done!)
We used Krylon’s paint + Primer duo in Satin White, and went through about 3 cans. It seems a bit excessive, but even with a cool adjustable nozzle, there’s still a lot of waste when spraying small, spaced-out, thin wires like these, so plan on more paint than you think. 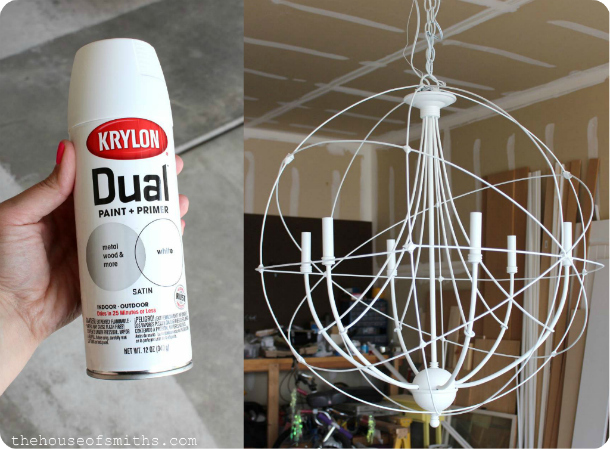 A few hours later, after everything was dry, Cason got going on removing our old light so we could hang the new one. In order to get the length we needed he had to remove some of the chandelier’s chain and shorten the power cord, but that went really quick. I slipped on our old white, fabric DIY cord cover from our last light over the chain, to give it a softer look, and then we got the light all wired up!
For tips on how to do that, you can see our “How to install a lighting fixture” post. 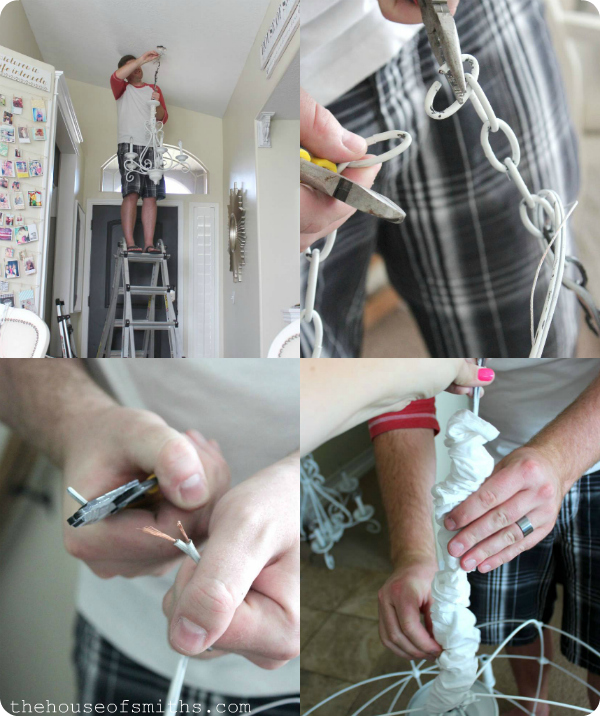 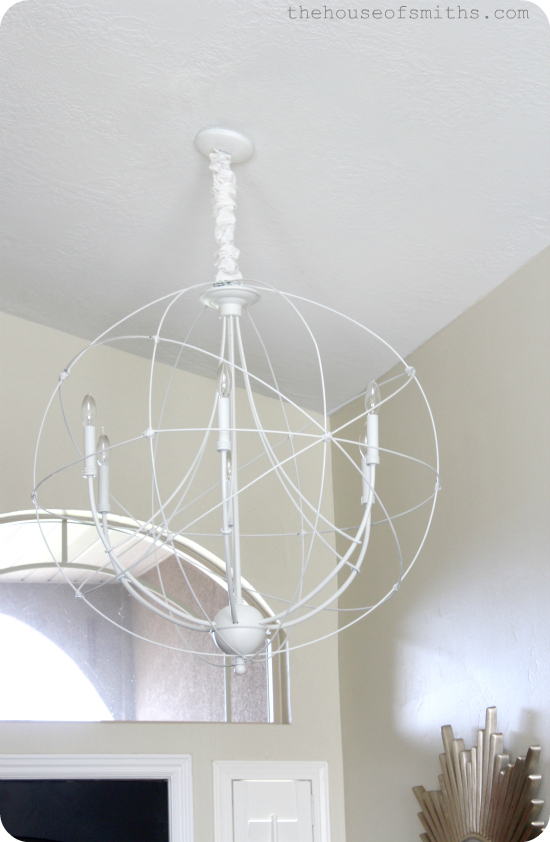 She’s definitely large and in charge, but that’s what I LOVE about her! She adds some more drama to the space, and almost acts as an art piece as well as a light fixture!
(ignore the fact that my cute entryway table is gone, I’m working on a little face lift for her too, you guys are gonna love it!) 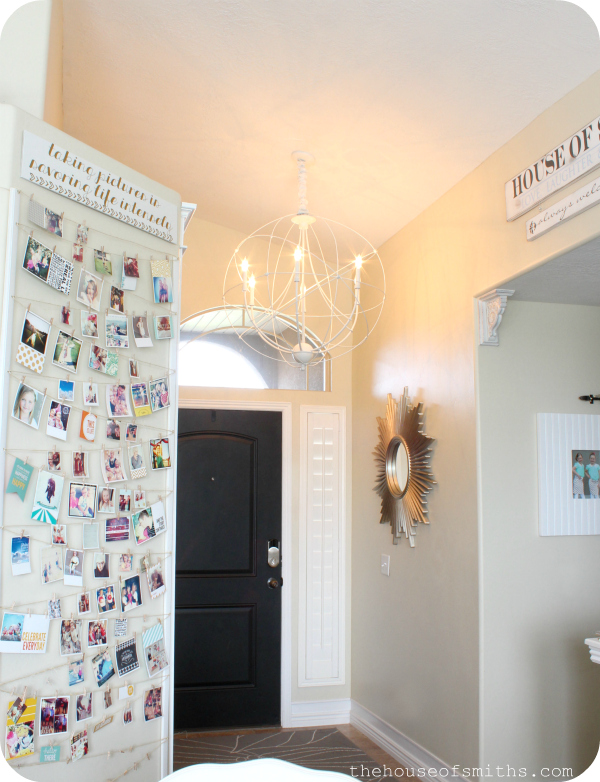 Tell me this doesn’t scream “Hey look up here!” to someone standing outside of my front door (?). 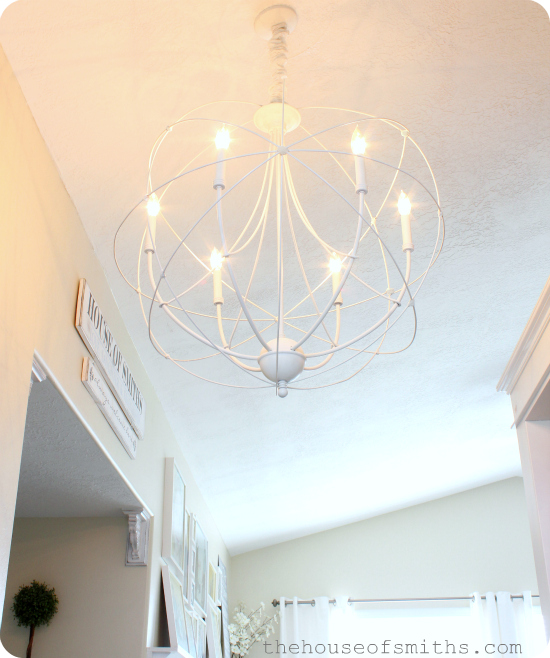 Now if I could only get it to also say, “Betcha’ didn’t know I was DIY’ed and cost about 75% less than what you can find me for in stores”… then I would REALLY have a conversation starter.
🙂 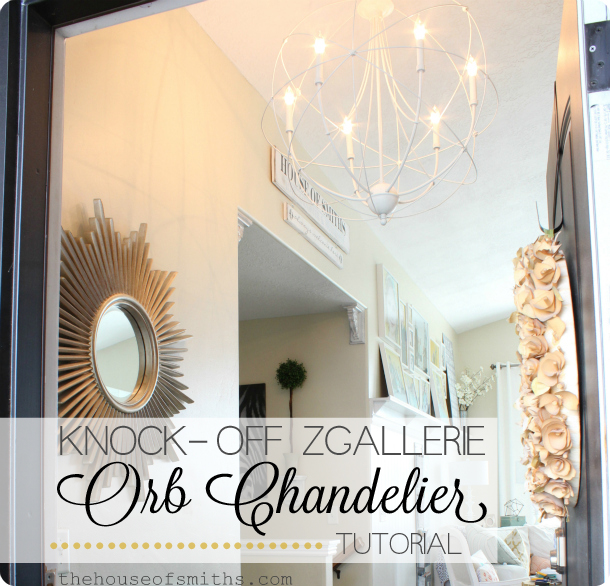 Okay, now that you’ve seen mine, you’ve GOT to go check out Jen’s Orb Chandelier tutorial on her blog today too. She’s done a bigger, slightly different, GOLD version of the same light, and it’s equally as awesome!
Take them both in, and see which size and technique would work best for YOU, if you were to add one of these cool orb chandeliers into YOUR home! 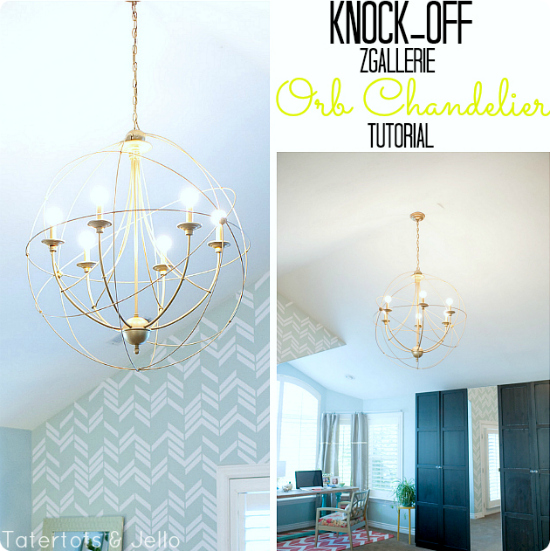 Previous Post: « 2013 Salt Lake City Parade of Homes = A Happy House Peeper
Next Post: School vs. Home Lunch – How Do YOUR Kids Do It? »