Home / Thrift Store Find Redo / Chandelier Revamp and Fabric Cord Cover Tutorial
{$4.00 DI Chandy Find & Cord Cover Tutorial}
Yes! Can you believe it? This baby was only $4 BUCKS at the DI!
Ronda actually scoped it out for me (she’s a master DI finder-er) and called me to tell me about it. I darted over there, and snagged it up asap! 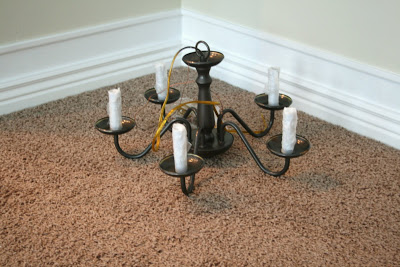 I’m not gonna lie. When I actually GOT it home, and looked at it… THIS freaked me out.
Uhhhh… Where’s the plug?
No really… I had NO idea how to put a light up! Much less, if this little guy even WORKED!
Enter in savvy, smart hubby….
He popped on a light bulb, stuck those two wires in a regular ol’ outlet and BAM! POWER BABY! It DID work! I was SO SO excited! 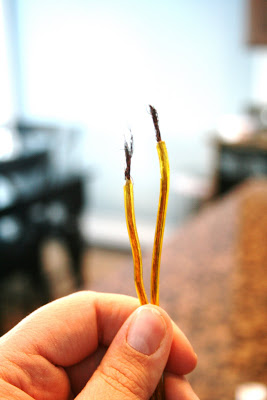 I wanted to get to painting this, as soon as possible, so I looked up instructions on how to safely paint a cheap chandelier, and it said to wrap the exposed light stick thingy’s with GLAD Press n’ Seal…. 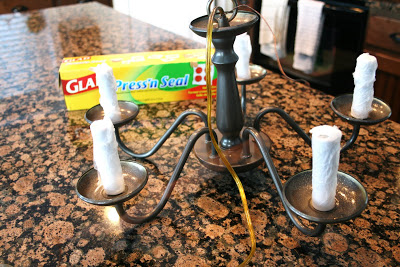 Hang from your garage door, and go to town with flat white spray paint!!!!!!……… 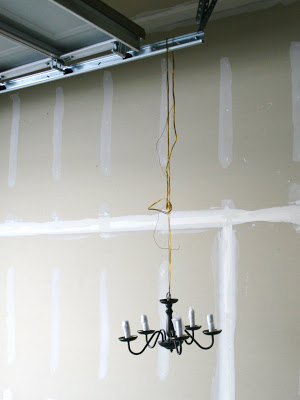 Okay… not really, but that’s what I did.
So it’s ghetto…. it worked…. really well, by the way! Another tip from Ronda. Hang it, instead of putting it on the ground, so that you could spray the WHOLE thing at once! 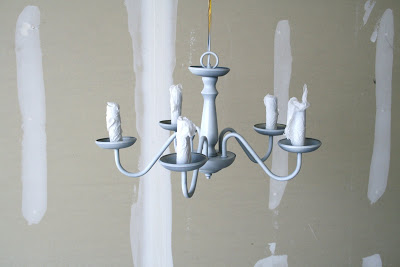 This light fixture took a BUNCH of coats… Mostly because someone had spray painted it before, from gold to that dark brown… with SHINY spray paint… so it took a bunch of flat white to cover the whole thing, like I wanted… but it got there!
Next… was my cord cover!
Everyone knows how GOOD I am with a sewing machine………..silence…………
Okay…. I’m lying… I have NO CLUE what I’m doing with this thing. This was LITERALLY the FIRST thing I did ALL by myself! And it was SO easy! And turned out great!
I cut two 36 inch pieces of white muslin fabric… stitched a straight stitch down each side leaving the ends open… 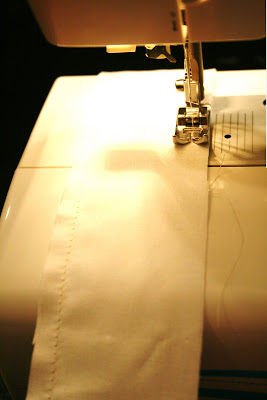 (picture compliments of Cason. He kept telling me to stop looking so serious. I didn’t FEEL like I was LOOKING so serious and kept telling him to get the camera out of my face, and to leave me alone… till this picture. LOL. Why does this machine intimidate me so!?) 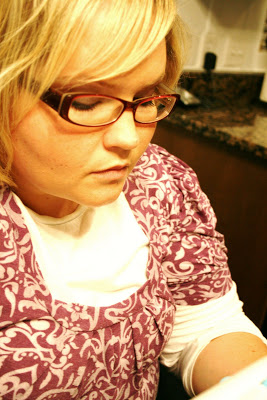 Till it looked like this
(yes… that’s a towel in the back round… but you can call it my ironing board. My last one broke… so I’m in need a new one) 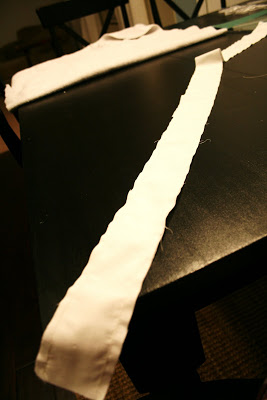 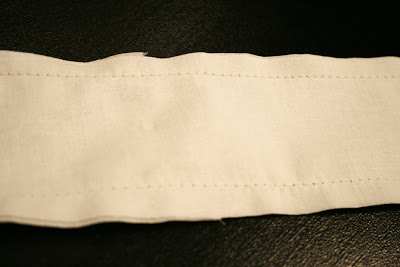 Then I flipped the fabric inside out!!! 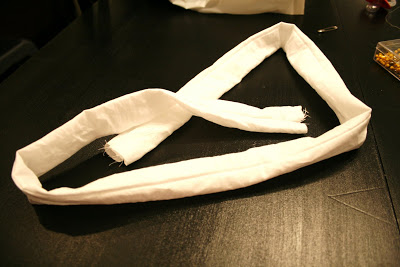 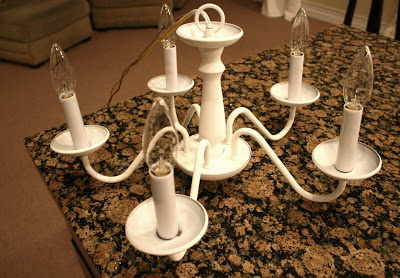 I tried to shove the cord through the fabric, but it was scratchy… so I relied on my trusty Press n’ seal to do the work for me, again. I wrapped the exposed wires, and it fed through perfectly!
(sorry for the blurry pic) 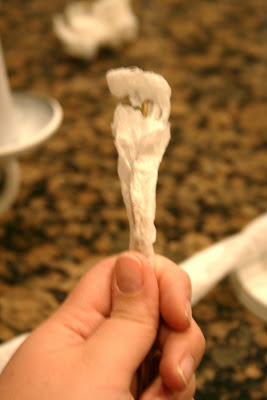 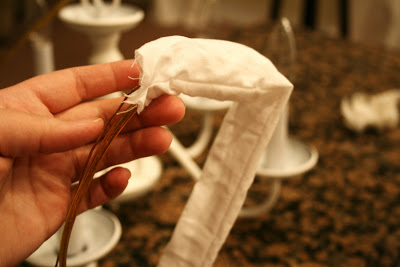 Instillation!
I had Cason take down the old light fixture, and hold the chandelier up to see what it looked like.
I thought it was a bit too close to the shelf, so we decided to hook the cord… so it could be more in the center of the room. 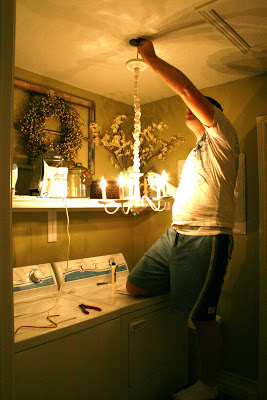 This is the hook we used…. well… until Cason SNAPPED off the “hook” part.
Ughhhhhhhhhh.
**Don’t get mad, he’s helping you… just go get another one from your great neighbor, Ronda, down the street… who ALWAYS seems to have at LEAST two of everything… making it almost impossible to have to actually GO to the hardware store……sigh…….I love her** 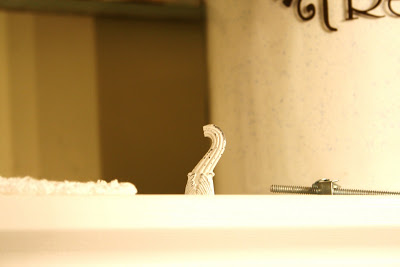 Drill… (poke and wiggle with screwdriver, bc you’re too lazy to get the drill) a lead hole in the ceiling, where you want your NEW hook to go 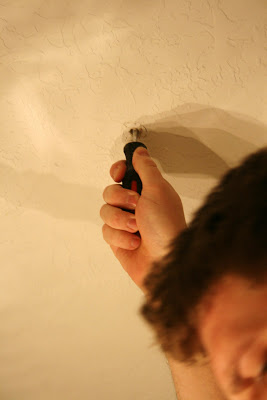 Attach hook, get a new white plate cover (it’s called a canopy.. btw… I learned that from the Home Depot guy, who said, … “you want what?”) for the other part of the ceiling… and… 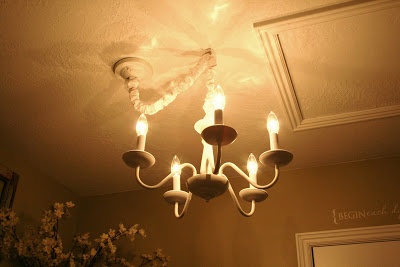 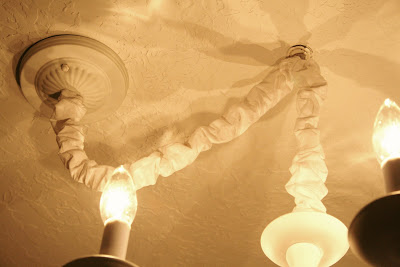 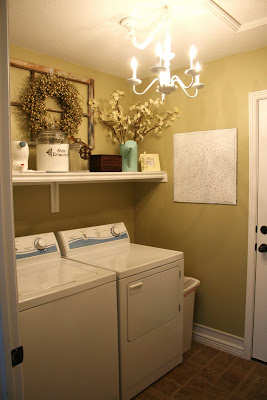