Home / Life / A Daddy-Daughter Road Trip = Memorable Moments
Waaazzzz uuuuup! (do people even say that anymore?)
Cason here, and I have to say that I’m pumped to share with you guys my “Four Corners Adventure” that the girls and I had this past weekend while Shelley was away and busy with the SNAP conference.
What can I say, I’m a dreamer. If there was a support group
for my kind I think Shelley would make me join. I have so many ideas in my
head about things I want to do, see, eat and experience, that occasionally, I have
to do one of them or I feel like I’ll go crazy. This is a LOT of the reason that I actually enjoy the whole DIY and redecorating/renovating process. It’s something fun, new and always adventurous.
Like I mentioned before, Shelley had SNAP this past week so I got the go-ahead to
check the girls out of school for two days, to get my travel on!!!… Truth be told, Shelley was actually pretty excited that I was taking on this trip alone. Of course she was sad that we were doing fun stuff without her, but once I told her that the trip was going be over 1000 miles long in the car, she was juuuust fine with not coming.
Did you know that Shelley get’s horrible carsickness? Always has. Road trips are almost unbearable for her, unless she’s driving the whole time, so it was probably better that she didn’t come on this little adventure.
Something you have to know about me, is that (unlike Shelley) I’ve always been up for hauling three kids around wherever I go, no matter what age they are. It doesn’t bother me one bit. Call me bizarre, patient or just easygoing, but Shelley used to look at me like I was crazy when I took our 19 month old twins (who could barely walk, because they were so premature) and newborn out to Target for a few hours to give her a break. She’ll be the first to admit that she’s more of a planner and likes to make sure she has control of the situations she’s in, and with three babies, this was rarely ever the case.

Hopefully she doesn’t get offended about that last statement, because it’s not a bad thing at all! In fact, I think it’s the thing that makes our marriage work so well. If I had married someone that was a dreamer like me, I think we’d be living out of backpacks and hostels, with no jobs or security. And if Shelley would have married someone really similar to her, well… I’d like to think that our blog may not be where it it is today, without me encouraging her to plow forward into unknown, unplanned, sometimes risky territory. I also feel like without me and my sometimes juvenile ways, she wouldn’t do as much goofing-off and laughing. Boys will be boys, and as happy as I am with our situation, it still doesn’t change the fact that I’m the only male in a house full of girls, so whenever Shelley starts to take life too seriously or gets overly emotional about the little things, I remind her to loosen up and just relax. And yes, this could be anything from a good game of “crack the egg” on the trampoline, to an impromptu dance party, with just the two of us.
If you subscribe to our little videos on Vine, then you know what I’m talking about.
🙂 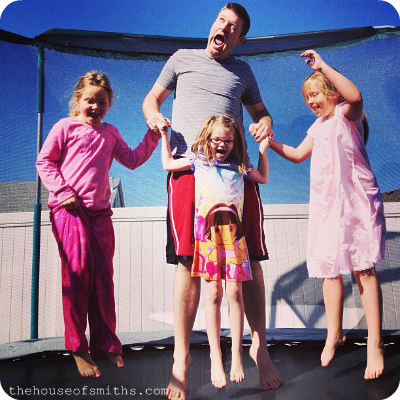 That being said, for the past year I’d been mulling around in my head a way for me to get my little girls down to the Four Corners area. Not only did I want to get to that specific landmark, but I wanted to explore all the attractions on the way down as well. For those of you that aren’t from one of
the Four Corner states, it’s a little Monument run by the Navajo Nation in the
middle of freaking nowhere. It has a little grid on the ground showing the
intersection of New Mexico, Colorado, Utah and Arizona. There are also flags
from each of the states as well as the Indian Tribes present in the area.
I spent some time over the past couple of weeks finding a
way to make the trip worthwhile. For me, this part is pure bliss… I get to pull out my
mile long bucket list and start checking things off. The following things were on my to-do/visit agenda:
1 – Four Corners Monument (Middle of Nowhere)
2 – Go on the house tour at “HOLE ‘N THE ROCK” (Moab, UT)
3-  Mesa Verde Cliff Ruins (Cortez, CO)
4 – Aztec Ruins Monument (Farmington, NM)
5 – Take a tourist boat on Lake Powell (Page, AZ) 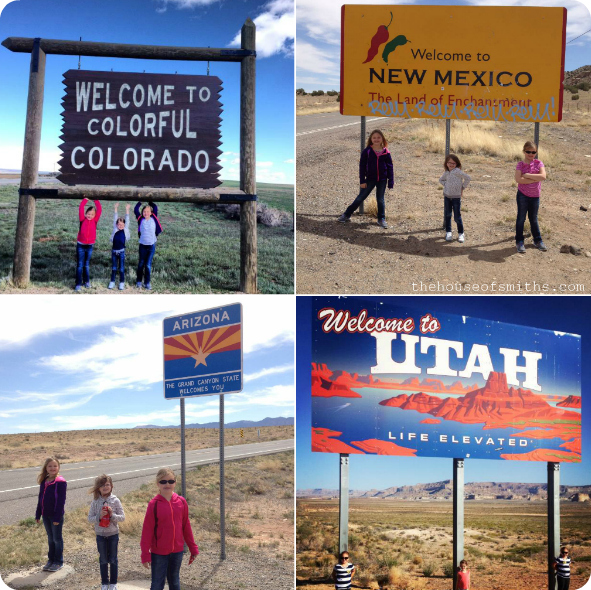 That’s a lot for one trip, I know… but I was ready to make these four states in four days happen. Since I was traveling with kids,
there was no way I was going to be able to do it without stopping frequently.
Here are some tips if you ever plan on doing this trip, or something similar:
#1 – Rent a Car
No way was I going to put that many
miles on one of our cars and tires! If you do it right, renting a car can actually save you
money in the long run. For me, I knew I wanted a minivan with bucket seats so the
girls couldn’t touch or bother each other (because petty fighting about who’s arm will rests on top of who’s, is what can make a long road trip miserable), and I also wanted seats that could recline when it was time for a nap. 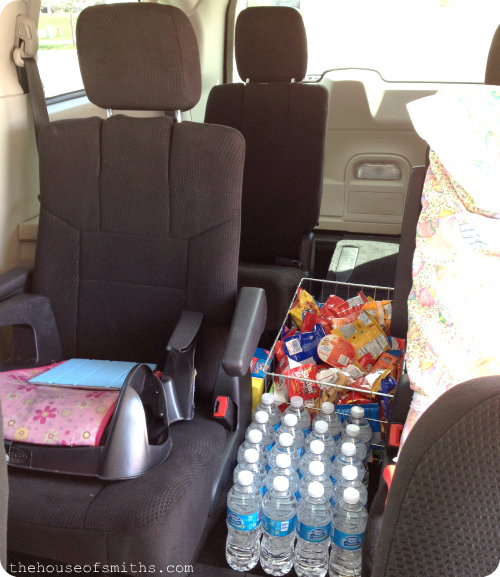 I’m personally not really a fan of minivans, because with how tall I am they’re never comfortable for me, and they’re pretty much worthless in the snowy Utah weather… BUT, they ARE great for space and storage, so I went ahead and rented one. I was able to pack snacks, drinks pillows and blankets between all the seats which was perfect, and for a whopping $48 and unlimited miles (not including gas along the way, of course), I was okay to sport one around for this weekend adventure.

#2 – Keep the travel as short as possible.
I tried to break up a couple of days with longer stops to make it feel shorter. 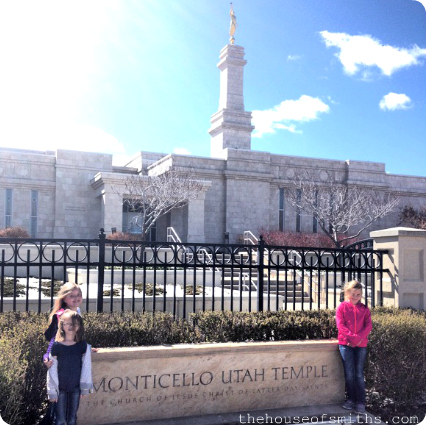 #3 – Prepare kids for what they’re going to experience that day.
Like how many hours in the car and a little about the event you have planned. For example, I knew I was going to Mesa Verde Cliff Dwellings and there would be ladders and steep stairs. Typically my girls are afraid of heights, but because we had talked about it beforehand, they actually were fine with it and knew what to expect once we got there, and did great. 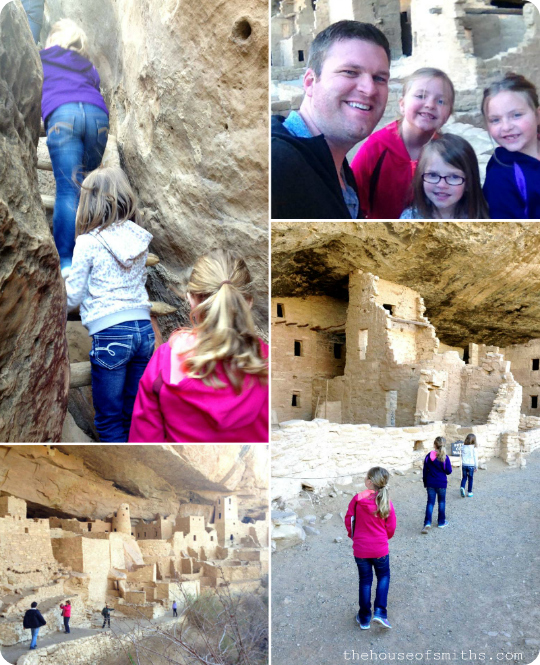 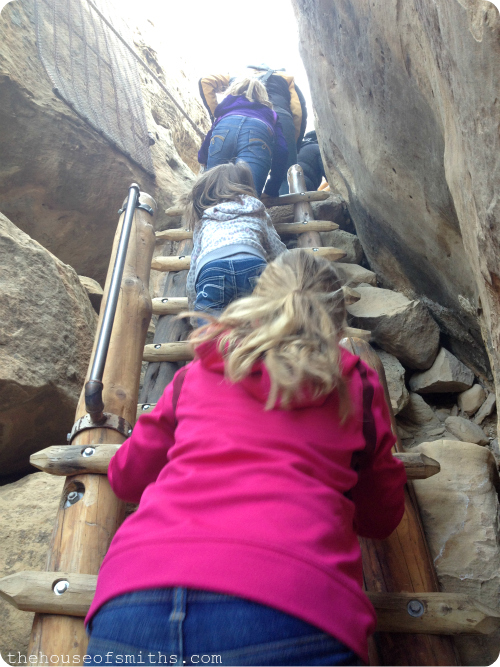 #4 – Take a TON of pictures.
This will be a great way for them to remember the whole trip, and can help you score MAJOR brownie points with the Misses especially if she’s a blogger. 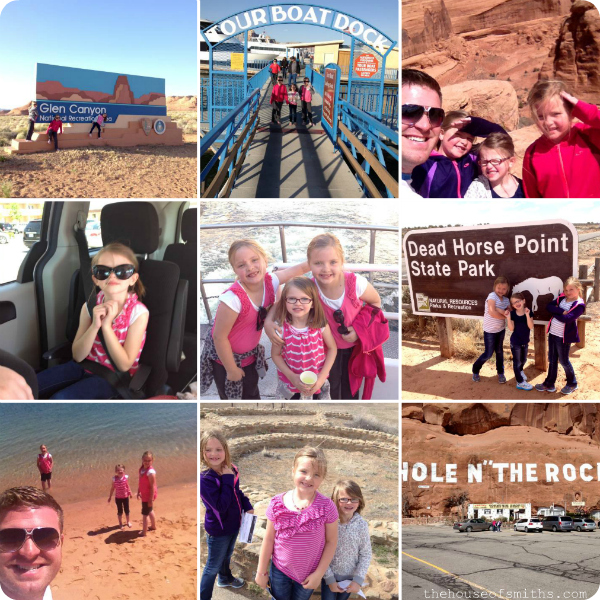 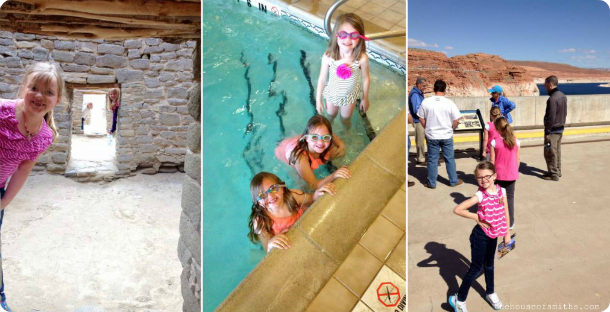 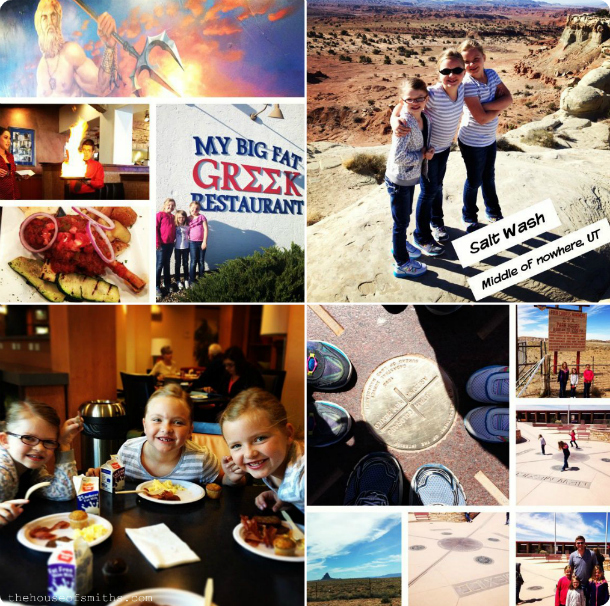 #5 – collect a few souvenirs.
It doesn’t have to be anything huge or expensive, even just a few maps of where you went on your adventure. Shelley’s been getting the girls into Smashbooking and so I made it a point to pick up a few pictures or postcards along the way, so the girls could put them in their scrapbooky journal thingys. (that’s what you call them, right?)
On one of our last stops I let the girls pick out something special. The twins got dream catcher necklaces and Aubrielle picked out an Indian doll. 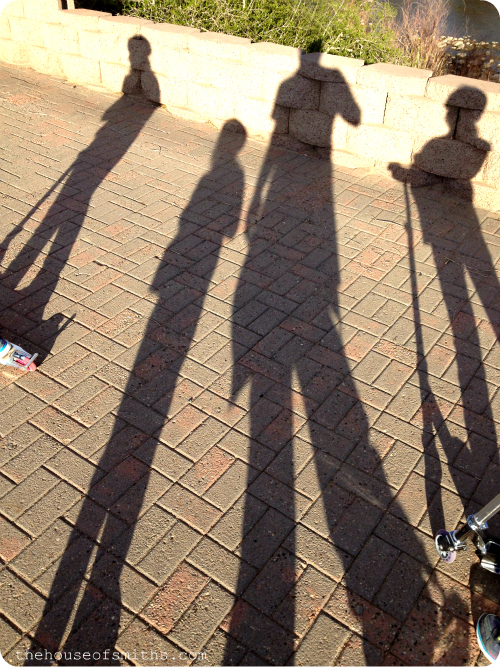 This trip was awesome for me, I felt like we were able to see so many nearby natural wonders, but more importantly, it gave my girls and I time to create really great memories together that we will get to cherish forever. As a Dad of little girls in today’s world, I am finding it so important to have positive and respectful male role models for them as they grow up. I want to show them how they should be loved and respected. I don’t like to think too much about my little girls letting another man into my their hearts one day, but as long as I show them what love looks like, by loving and supporting their Mom in all she does, and what love should feel like, by keeping those doors of communication open and taking them on occasional little trips like these to spend time with them, I know that they will be able to make the right decision later on in life, when it’s time to finding life-long friends, boyfriends and potentially husbands of their own. 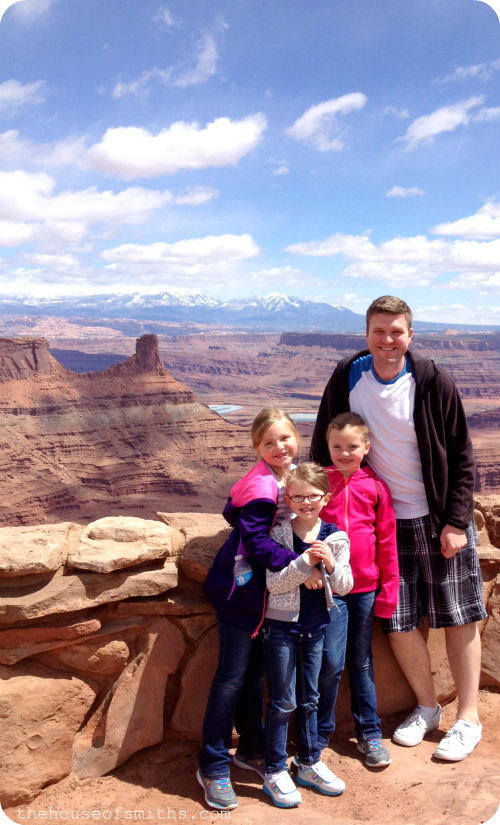