Hi, my name is Shelley, and I suffer from EMSD.
Extreme. Motion. Sickness. Disorder. 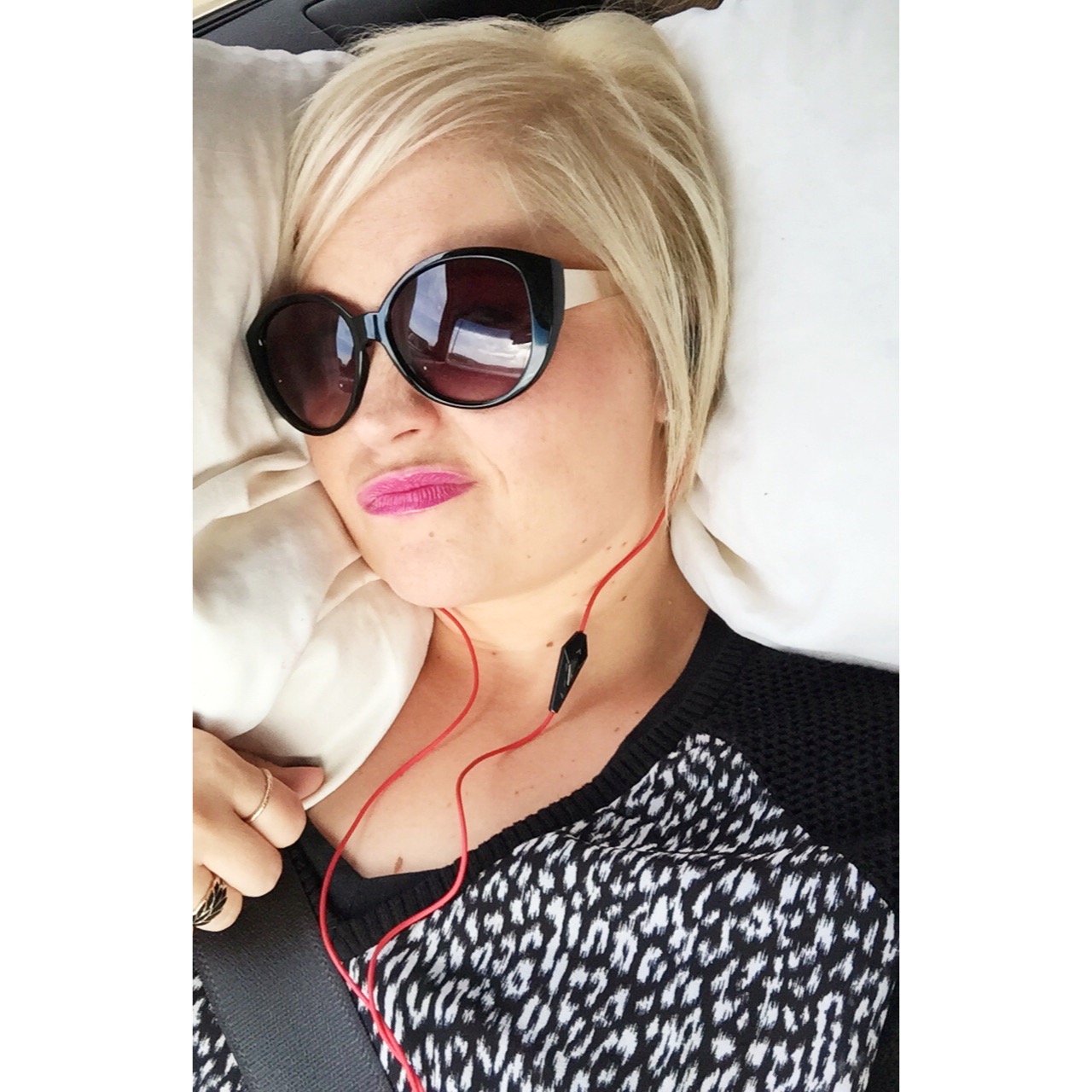 Me on a road trip to CA, after losing my lunch on the side of the road #glamorous
Okay, so that’s not really a medical term, and while some of you are rolling your eyes or giggling, there will be a handful of you who TOTALLY understand the seriousness of this stupid problem.
How?
Motion is sensed by the brain through three different pathways of the nervous system that send signals coming from the inner ear (sensing motion, acceleration, and gravity), the eyes (vision), and the deeper tissues of the body surface (proprioceptors).
When the body is moved intentionally, for example, when we walk, the input from all three pathways is coordinated by our brain. When there is unintentional movement of the body, as occurs during motion when driving in a car, the brain is not coordinating the input, and there is thought to be discoordination or conflict among the input from the three pathways. It is hypothesized that the conflict among the inputs is responsible for motion sickness.  – source
Culprits:
Rollercoasters
Riding as a passenger in ANY vehicle
Planes
Trains
Boats
Swings
Trampolines
Symptoms:

Dizziness
Nausea
Stomach turning
… and typically, vomit.
(ew gross. why am I even reading this weirdo girls blog who’s talking about throw up?)

It’s cool, I just thought the same thing… but I feel like this NEEDS to be talked about. No matter how UNglamorous a topic it is.
Why?
BECAUSE IT SUCKS! And because it’s a freakin’ annoying, real-life issue that I’ve had to deal with for as long as I can remember. And if I have strong feelings about it, then I KNOW someone else does too, so I thought, why not share what helps ME to shake MY extreme motion sickness!? Maybe it could help someone else. 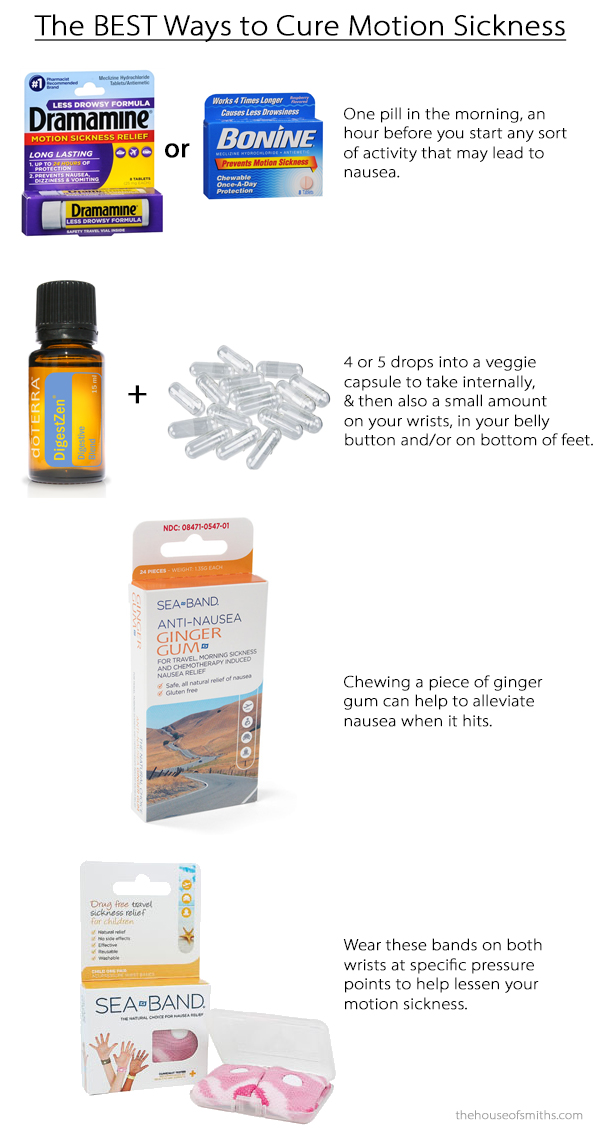 This post came about because while on my cruise a while back, I was deathly sick for the first 2 days. It was awful and I wish I would have started with a few of these treatments sooner, because once I had some stuff in my system, I was about 99% better and could enjoy myself.
1 – Dramamine is a miracle worker… but make sure you get the LESS DROWSY kind, or you’ll be out like a light! The original formula puts you right to sleep. Some people say they still had some sluggishness when taking the less drowsy formula, but I didn’t have that problem at all.
Bonine is said to be a big helper too, much like Dramamine, but I’ve never tried it. If you’ve taken both, I’d love to hear your thoughts on how they compare!
* I only take this if I’m actually going on a road trip, plane or boat. Never just “because”.
2 – DigestZen from doTERRA is amazing! It works for a laundry list of things, and is totally safe to use on kids and pets! In fact, I just learned this year that my body doesn’t digest cabbage well… like, at all, and one day I was dealing with shooting pain in my stomach after eating an Asian salad that was basically all made of cabbage. I came home, filled up an empty capsule with 5 drops of Digestzen, swallowed it, and in a matter of about 30 minutes, I had ZERO pain.
I have no idea how it all works, I just know it does. I’m not a crazy oil lady, but my sister is, ha! and she sells me the stuff she knows I’ll like and need, so if you have questions about them or want any oils for yourself, feel free to talk to her… because I’m no help past this point. lol!
3 & 4 – These are probably the LEAST effective methods for me, but they do work for some people, and I’ve tried them, so I thought I’d include them as well. The ginger gum… or just gum in general, has a really effective way of helping ease the nauseous feeling when it comes on after you realize you’re experiencing motion sickness. I think hard candy is just as effective though. There’s something about redirecting the “I want to throw up” mindset, to “Hey, I’ve got a flavored treat in my mouth… so that means I can’t puke”  that makes you feel a little better.
The bands – meh. I tried them on my cruise, and could never tell if THEY were actually working, or if it was more the Dramamine. Some people swore by them though… so maybe for certain individuals they work well.
Obviously I’m just a normal person who has zero medical knowledge beyond what I know works for ME and my symptoms, when it comes to motion sickness… so make sure you read ALL directions on medications before you take them, especially if you’re pregnant or giving them to younger kids.
I hope this helps someone… and when you see ME driving and Cason sitting shotgun next time in our car, it’s not because I LOVE driving so much, but it’s mostly to save him the annoyance of me having to stop halfway through wherever we’re going, to hurl on the side of the road. #notawesome. LOL
xoxo

“Other things may change us, but we start and en

✨ONLY 24 HOURS LEFT on the @ourplatter deal! Use