Home / Halloween / Black, Gold & White Art Deco Inspired Halloween Shelf Decor
I hope you guys aren’t sick of all of our Halloween decorating and ideas yet, because I’ve still got a few things that I’m excited to share this month… hence the reason I started so early 🙂
If you missed our last Halloween decor post, we showed off our spooktacular entryway, decked out with a plate wall, flying crows and even a box full of DIY potion bottles. 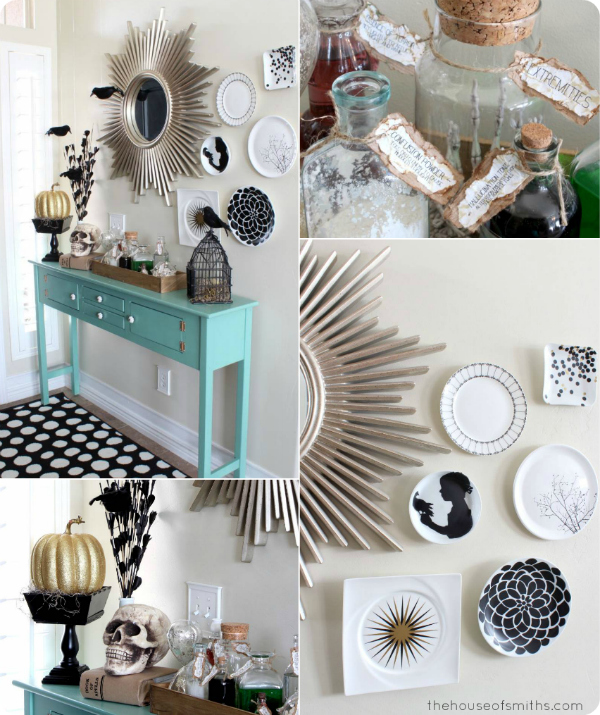 And of COURSE, around here, no holiday would be complete without a little kitchen shelf decorating as well, right!? So just a few steps further into our home you’ll find yourself familiar with a couple more Halloween touches. 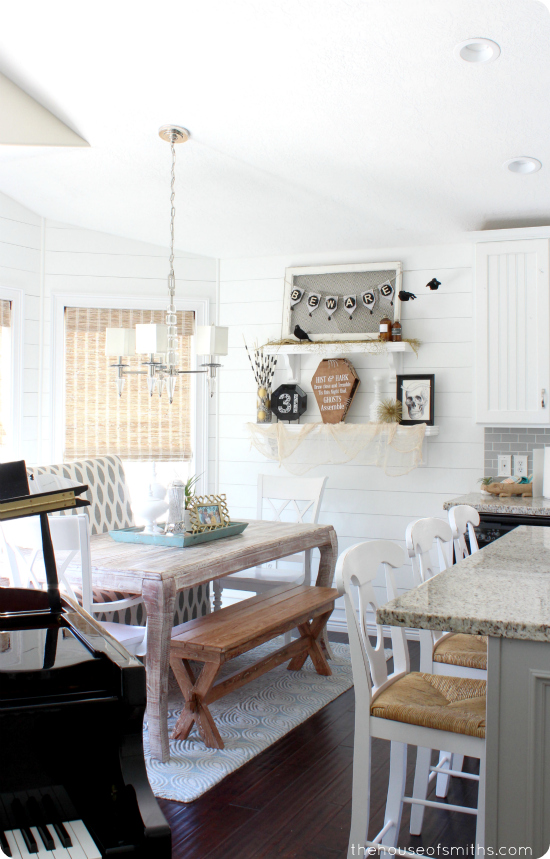 Like I mentioned before, I was shooting for a sort of “glamorous, art deco, Great Gatsby” type look this year. The details (gold, geometric, contrasting colors and jewels) are subtle, but combined together, I think I achieved the look I was going for! 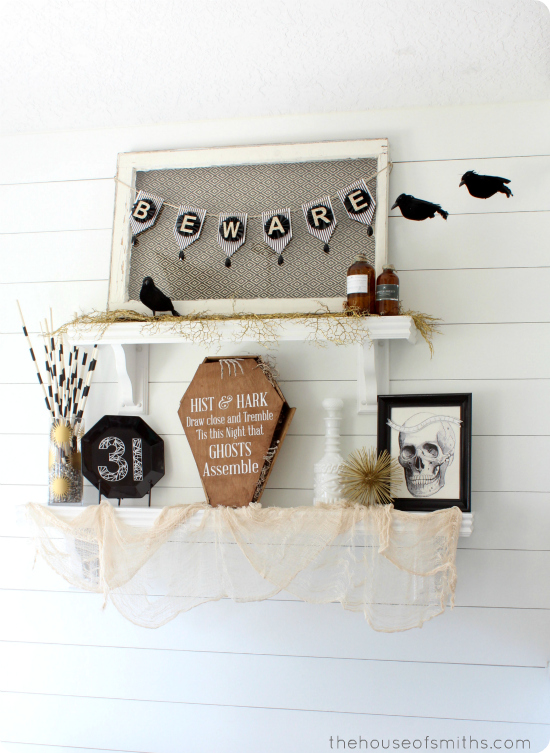 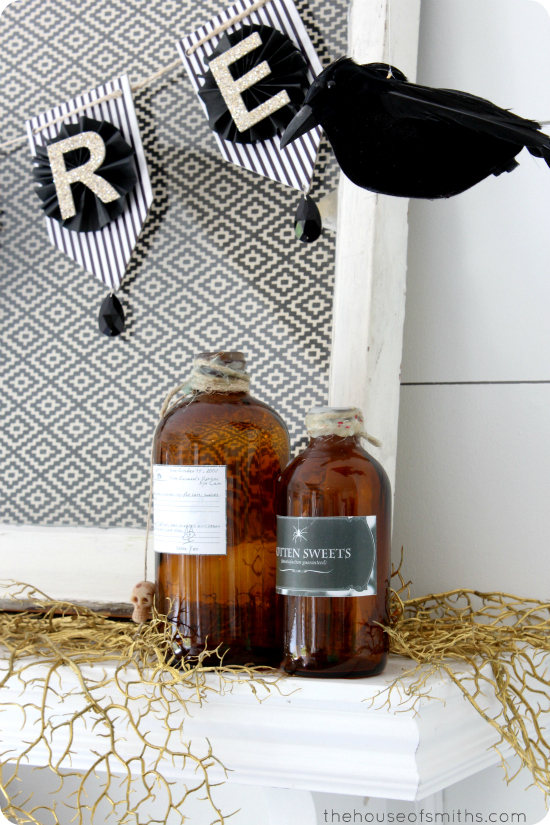 brown potion bottles from Swiss Days vendor, Paper behind window – The Paper Source
One of my first inspiration items was this gold coral spray from Zgallerie. It was originally on one long branch, but I cut it apart and spread it all the way across my top shelf.

I added a single crow, but then wanted the appearance of other “friends” swooping in to join him, so with a few hook and eyes and fishing wire, I had Cason string a couple more from the ceiling to give the illusion of more birds flying in. 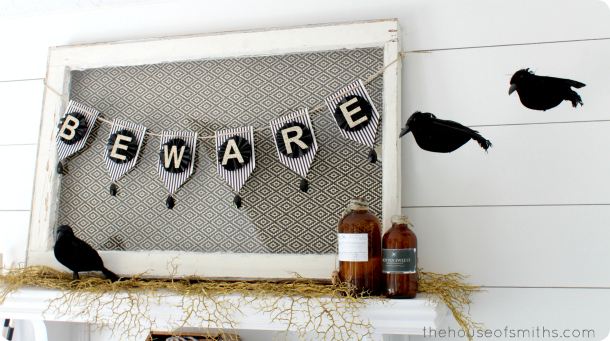 The BEWARE garland was sort of a DIY project. I actually picked up the original “halloween” banner at 80% off from a big home decor store, because it was torn apart and ruined pretty badly. BUT, the thick, cardboard-like, striped banner pieces and most of the black pinwheels were still in great shape! So I just simply took the entire thing apart, reassembled it a little differently, and in no time had a new (and I think cuter/classier) banner, for only about $6.00! 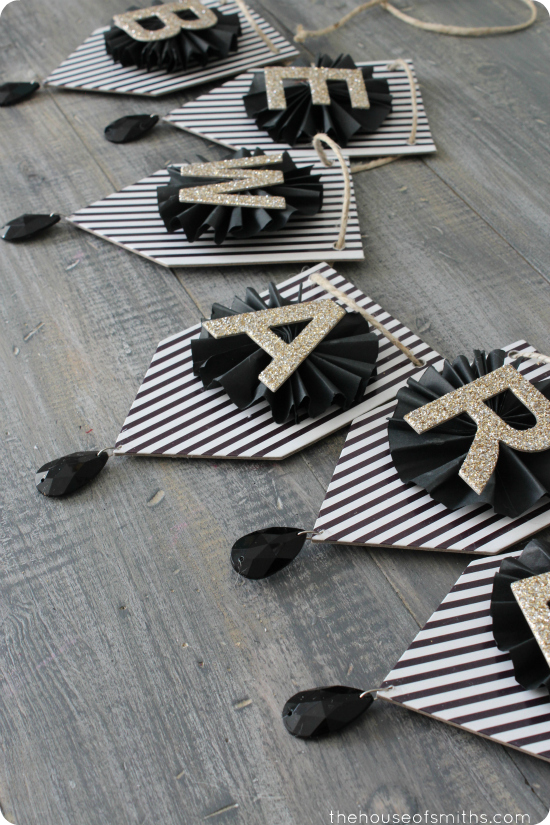 I reused this cylinder vase with tiny shells in it from two years ago, covered it in small, gold burst decals and cut some striped Ikea sticks in half to make a sort of modern arrangement, next to my geometric number 31 that I designed. 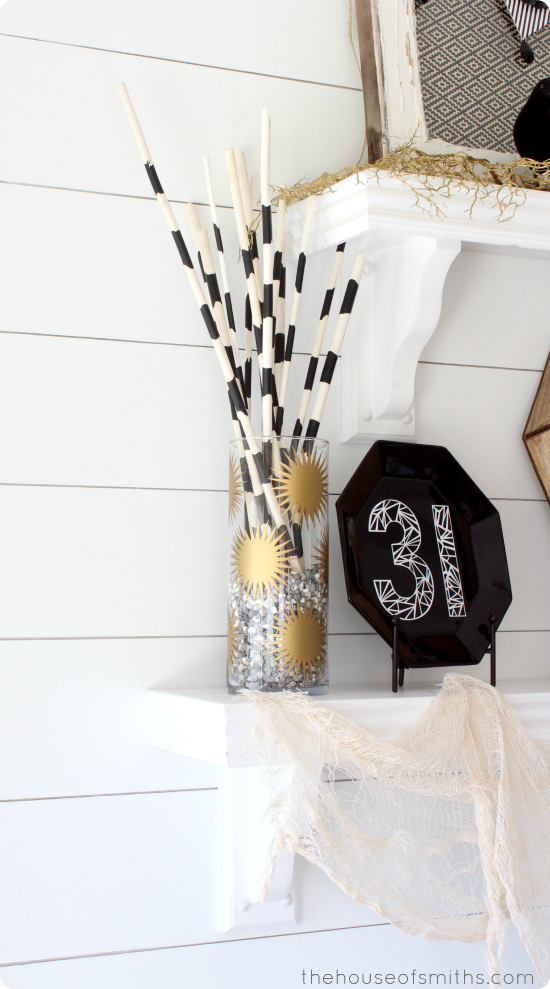 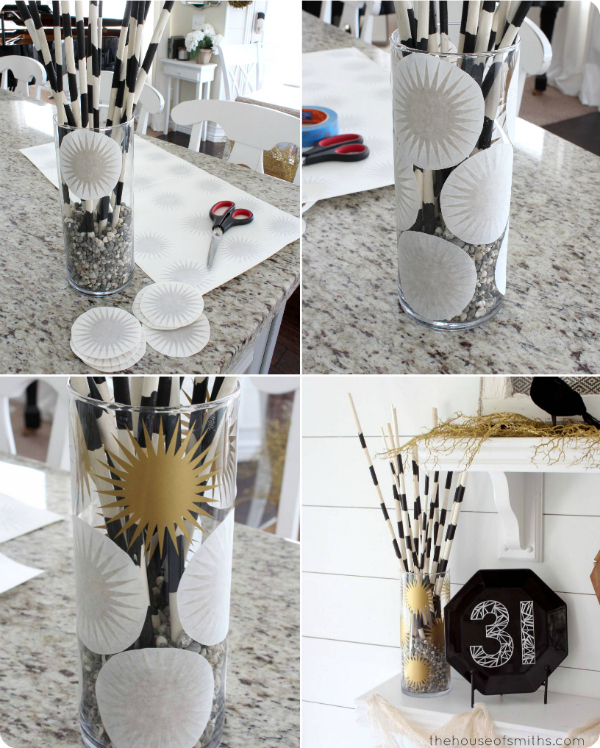 You can buy the small burst and geometric 31 decals in The House of Smiths Design Shop. 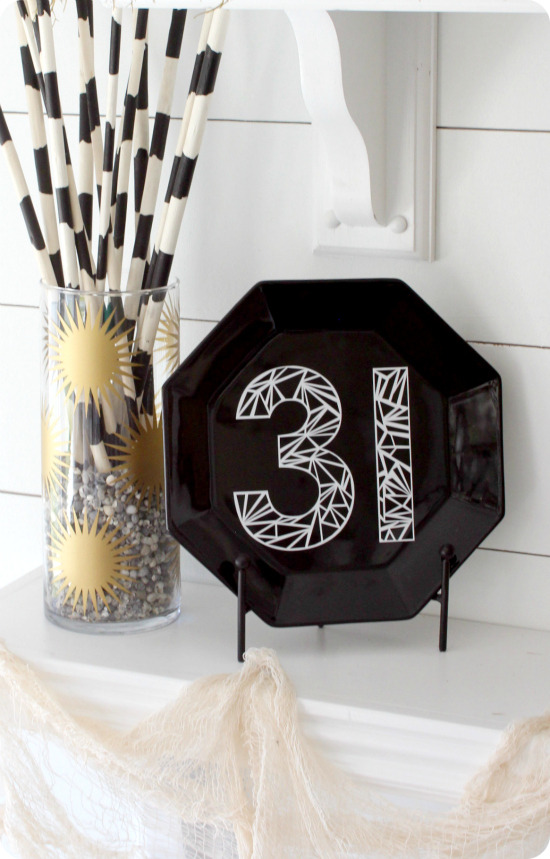 Our DIY creepy toe pincher coffin has GOT to be one of my most favorite pieces in this whole display. If you missed it, the tutorial for that is here. 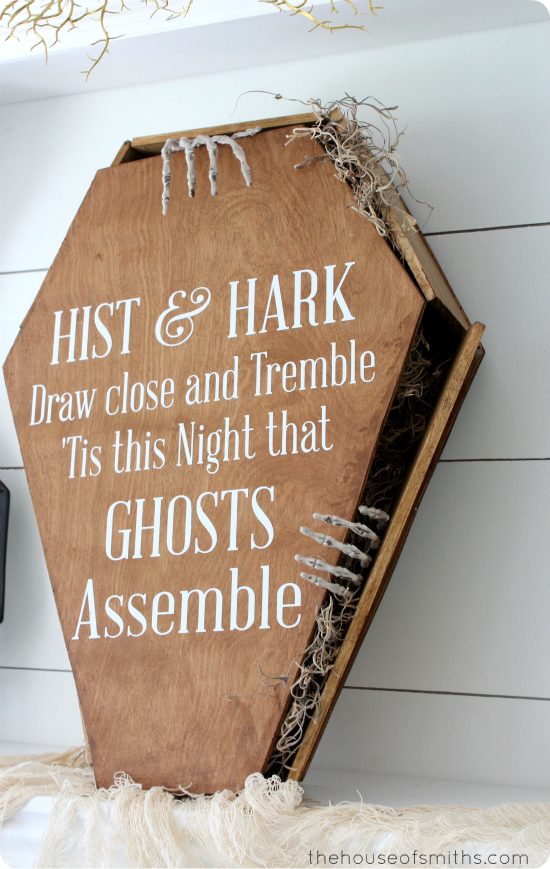 This awesome gold spiked sphere was something I splurged on at Zgallerie, the skeleton print was from a vendor at the Swiss Days fair and the large, ornate milk glass bottle was from DI (our local second hand thrift store) for $4.00. 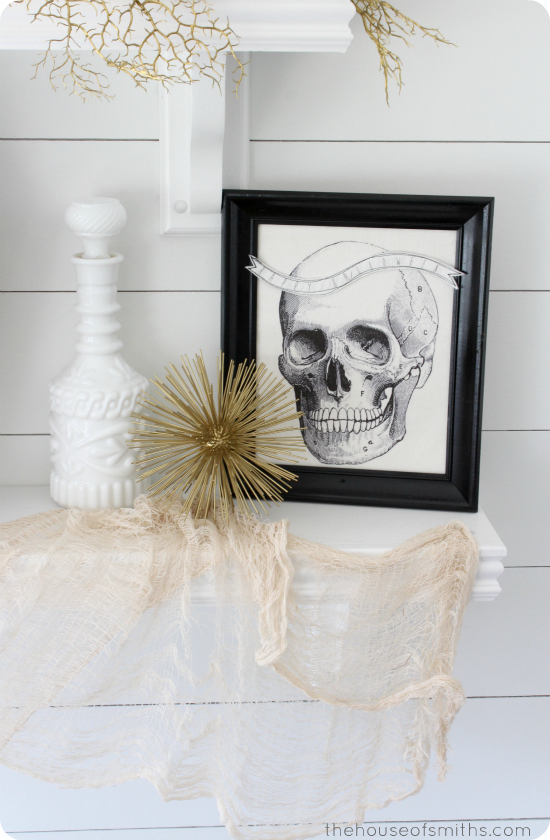 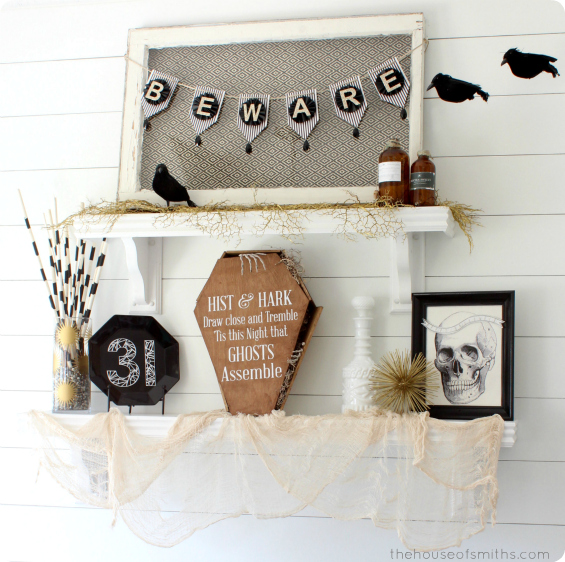 After draping some gauzy Halloween rags from Walmart to the bottom of our shelf, the look was complete! 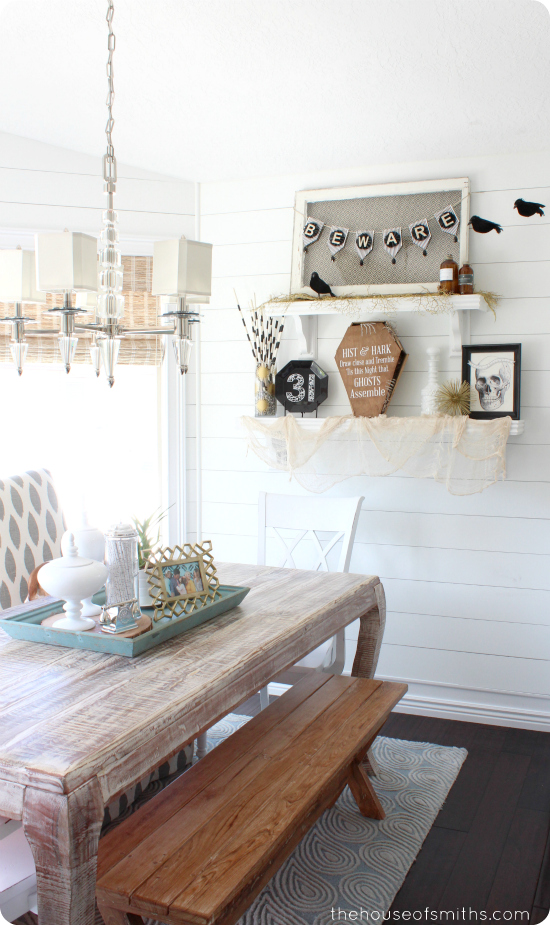 It’s a Halloween display that doesn’t scream, “Hey!, there’s Orange, Purple and Red Halloween decor over here!!!”… and I think I like that this year. It’s classy, but at the same time, still a little spooky 🙂