Aaaand we’re back!
Project basement makeover is still underway; although we’ve gotten to the point where we’re now trying to decide on colors, finishes and what to do down here that will really make a statement.
A few weeks ago we finally faced one of our biggest challenges… the totally random placement of our water shutoff valve. Yup, as you can see, it’s awkwardly placed right there, basically in the middle of the largest blank wall that we have in this space. 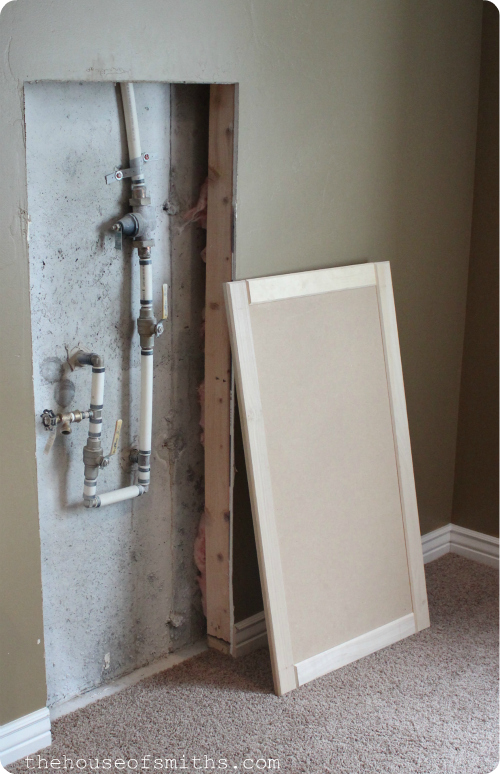 The crummy part about this problem, is that you can’t just drywall over the pipes and call it a day. You have to leave them exposed  in case there’s an emergency and need to get to them. So really, our only option in the end was to create some sort of door or removable cover to hide the pipe.
Last year my Dad built a storage tower for my brother and had an extra door left over from his project that he ended up not using (yeah, my Dad builds doors from scratch… what?) so, he asked if I wanted to use it. Since it was unfinished and ready to paint, I quickly snatched it up! (thanks Dad!) 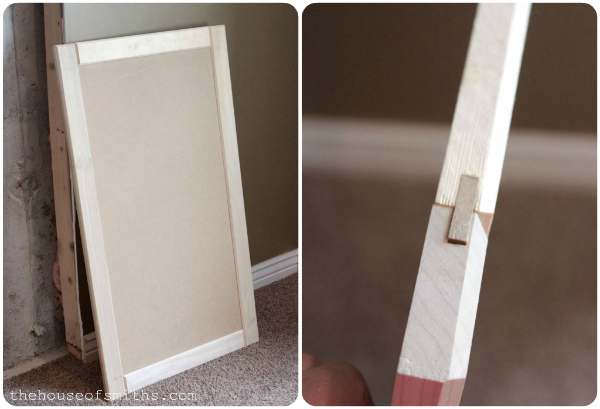 Making a cabinet door is a labor of love, but if you want to attempt it or even just see how it can be done, then EPBOT has an awesome tutorial on her site for DIY cabinet doors.

Even though we couldn’t sheet rock the entire hole, we could at least close up a good portion of it. This started by installing a few support boards for screwing drywall into. We had to notch out a small spot for one of the pipe fixtures, but that only took a few seconds with our multipurpose oscillating tool. After that we used long screws to secure the new support board in place by drilling them in at a diagonal angle. 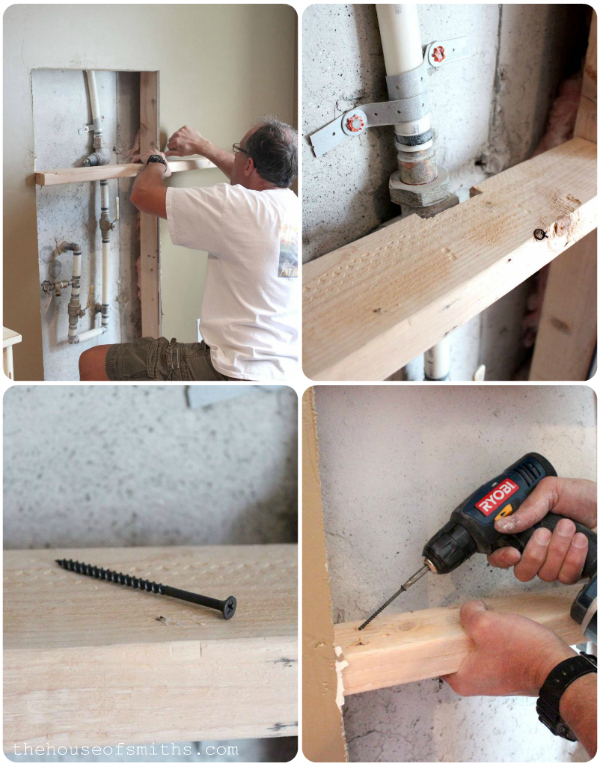 As you can see from the image below, we also needed to add a support board at the bottom, for the small piece of baseboard that was missing as well. 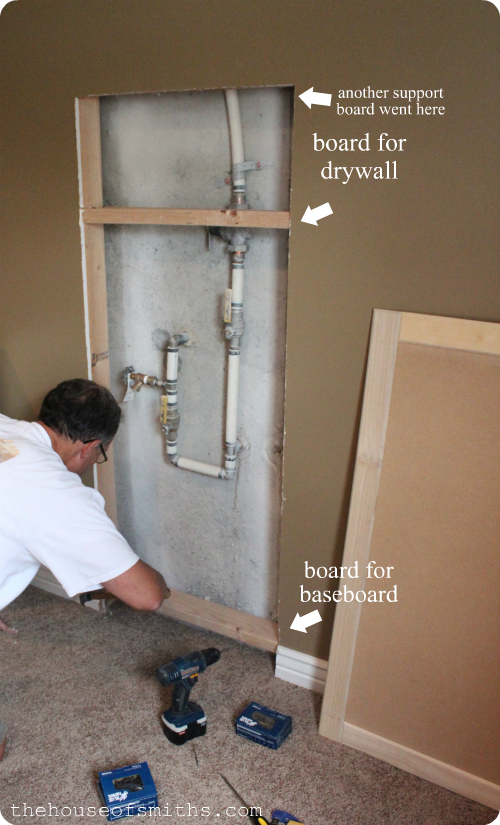 Once the support boards were in place, it was time to get the new piece of drywall up. Typically drywall comes in large 4×8 foot sheets, but if you ask or look around your hardware store, you can usually find 2×2 foot pieces on sale for only a couple of dollars.
TIP: When you’re putting up drywall you always want to make sure to “sink your screw”. Basically, this means that your screw is going to be below the drywall’s surface. The reason you do this is because you’re going to go back and putty over the holes to fill them and if your screw isn’t sunk in far enough, it will create a bump in your wall and you won’t be able to get a flawless, smooth finish.

Next was the taping and mudding. I snapped a few quick pictures so you could get the idea, but my Dad and I covered this whole process step-by-step for you in our Simple Steps to Repairing Drywall post, so you can look there for our DIY tutorial. 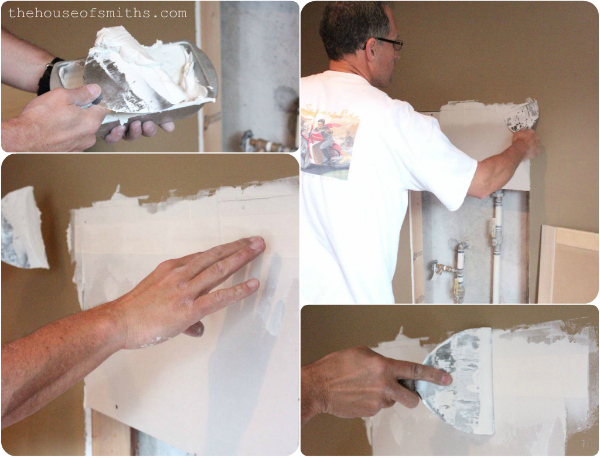 The bummer part about repairing drywall, is that it takes multiple steps that can last for a day or two, depending on how much coverage the seams need to blend in nicely with the surrounding wall. Personally, I’m into DIY projects that provide instant gratification… so this whole mudding, drying, mudding drying, mudding and drying process, almost put me over the edge. Apparently patience is NOT a virtue I posses.
**blush** 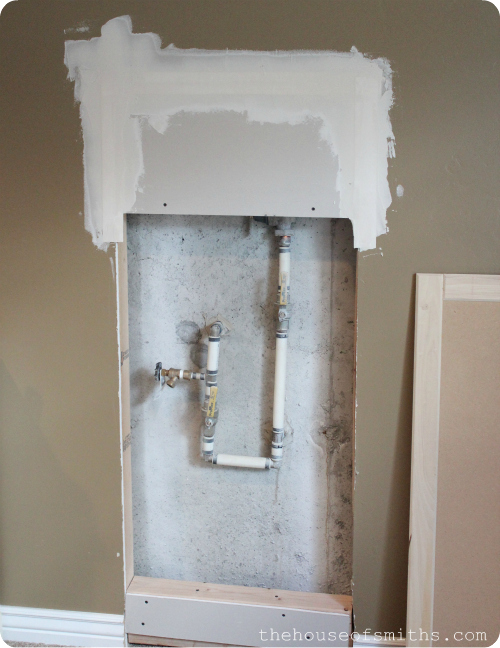 Even though a bit tedious, all of those steps were worth it, because after our new paint was applied, in the end, the wall turned out flawlessly! You would have never known there was even a repair made there.
My Dad came back after we had all of our walls finished and helped build a simple frame for the door to attach on to. He also replaced the piece of baseboard at the bottom. 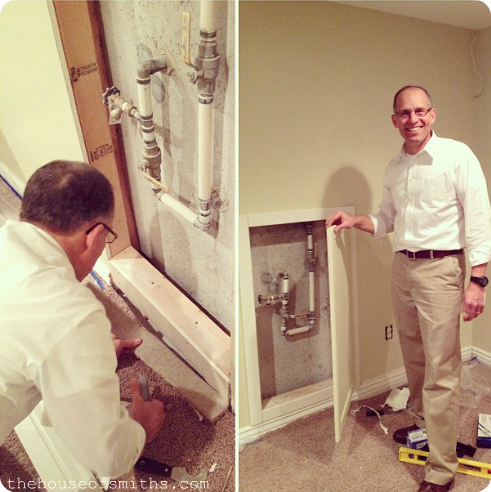 As you can see, we painted the door the same color as the wall (Autumn Haze from Glidden) and now just need to paint the primed frame around the door the same shade, along with touch-up on the wall to the right, from removing the old piece of baseboard to replace it with a new one. 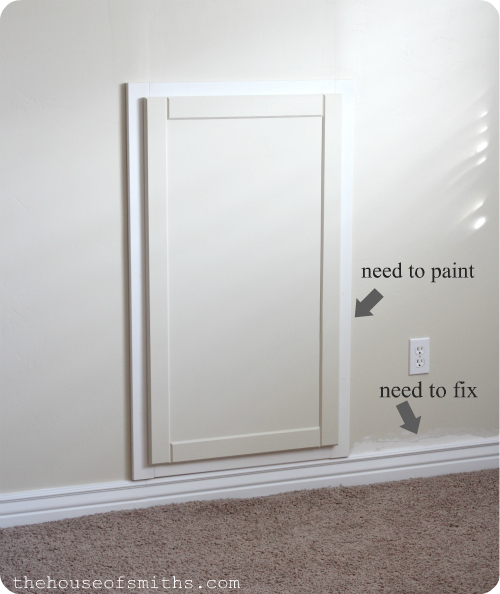 I think my biggest concern (beside the fact that we now have quite the eyesore in this space) is that I’ve noticed this door is very enticing for our little people and their friends. grrr. I mean, you can’t blame them… you see a little door about your size and HAVE to open it to see what’s inside. Once you do, and then quickly discover it’s not Narnia, the curiosity of what “that lever” does kicks in and all of a sudden the water turns off.
See my issue?
For this reason we’ve decided to put command picture hanging strips on either side of our door to keep it closed.
(sorry for the grainy iPhone pic) 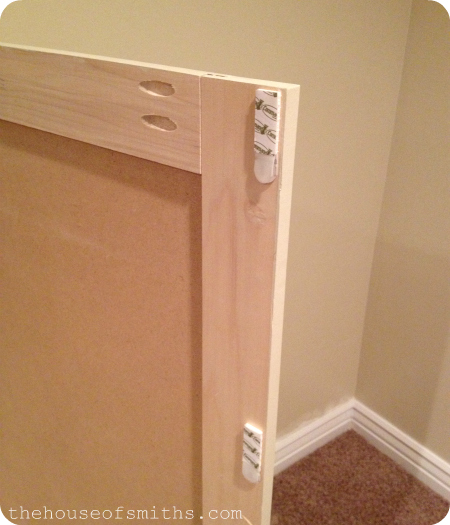 At a single tug children can’t open it, but both Cason and I will easily be able to maneuver the velcro command strips apart if needs be.
Is having a mini door on the wall our ideal look for this space?
uh…. not-so-much
But that’s life, and we’re trying to do the best with what we’ve got.
🙂
… till next time!