Home / Uncategorized / Working Hard… or Hardly Working Out?
Yup, it’s that time again… where you get to hear me drone on and on about my personal thoughts towards diet/gym stuff, instead of home renovations or decor. ha!
I’m now heading into week 19 of my HARDEST DIY project yet…
Project: Lose Weight.
You can read more entries about my journey so far, here and here.
So, I’ve been going to the gym for a long time now, right? No less then 5 days a week, and usually in the morning. After a while, you start to see the same people each day…
* The chick who totes her huge purse around with her everywhere she goes, and then tends to leave that purse on the seat of the next machine she wants to use, to “reserve” it, till she’s done chillin’ and texting away on her phone at the current machine she’s on.
* The muscle head that makes ridiculously loud attention-grabbing noises while lifting crazy amounts of weights…and really barely even does much, besides discreetly looking at himself in the mirror between sets, and walking back and forth from the weights to the water fountain every 5 seconds.
(Oh! and making flirty glaces at the girl on the treadmill next to me)
* The middle-aged man who hits up all the machines, yet focuses more time on using the disinfecting spray and paper towels to wipe them down, instead of actually working out on them
and last, but not least…
* The 22-26 year old single (totally already fit and skinny) girl who always tends to jump onto the machine right next to me, just as I’m finishing the last 10 minutes of my work out, with her super long-haired ponytail that she frantically whips back and forth.
I am truly convinced that she’s more worried about the cuteness of her “ponytail swing” then actually breaking a sweat. (no joke)… maybe she’s doing it to to impress the muscle-dude ???
(siiigh)
Do I sound like a brat or WHAT? ha!
Am I probably just a liiiittle jealous of said, “skinny-fit-ponytail-girl”, because instead of being able to exert all of my energy on wondering what my hair looks like during my workout at the gym, I have to ACTUALLY work out?… and tend to look like THIS, in the process most of the time?… 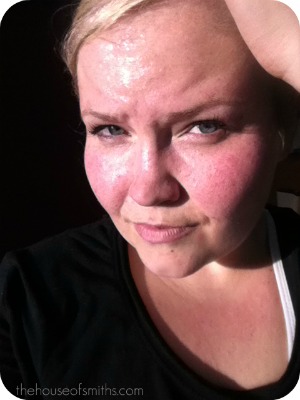 Sure… okay… Yes, Absolutely.
To be fair, there ARE other people lookin’ fugly and attempting to work hard like me too, I just seem to be noticing the gym grazers lately, who hardly ever really break a sweat and it got me thinking…

When YOU go to the gym, are you Working HARD?… or HARDLY Working out?
This past week my lifestyle coach put me on a new workout he made for me, appropriately named:
THE SHELL-INATOR

When you’re going to the gym 6 days a week and eating basically the same types of foods all the time… ANYTHING to change your monotonous routine up, is helpful and exciting. But it was only about the 6th exercise in on my sheet, that I started to feel angry… right about the same time that I felt like my freakin’ legs were going to blow-up from the amount of heat burning inside of them.
Thoughts swirled through my dizzy head, like…
“Why do I have to work THIS hard to lose weight, it’s not fair!”
“Why did I ever let myself get this far?”
“I’m so uncomfortable right now, I’m sure I look freakin’ stupid jumping around like this”
and
“What was my lifestyle coach THINKING!? I’m too big for these exercises, I can barely even do them!”
By the end of even ATTEMPTING “The Shell-inator”, I was standing in a puddle of sweat… literally dripping from every pour (or at least that’s what it felt like)

(ya, that’s drippy nose sweat… sick)
I tend to do a LOT of my “important thinking” towards the end of my workouts each day. Usually when I’m laying on my big blue mat, in front of a deep purple wall, after sit ups… and during my last round of stretches. 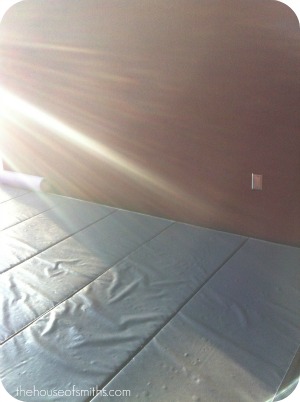 As I was lying there this particular day in silence, headphones still on my ears, but no music playing, I had the thought cross my mind…
“Maybe YOU’VE gotten to the point where your body thinks YOU’RE hardly working out… instead of working hard.” (?)
I wanted to quickly scratch the thought from my brain and yell at myself… “What the freak are you TALKING about!? I work out hard-core every day!” But in my heart of hearts I knew I was right. I couldn’t keep going on my comfortable, non-embarrassing, less-things-bouncing-around-on-me-that-shouldn’t workout plan forever. I was going to have to switch things up if I wanted to hit that next 10 pound mark, sooner then later.
I woke up the next morning barely capable of movement, because I was so sore from my workout the day before. As I hobbled to the kitchen for some Ibuprofen I had a strange empowering thought :
“YES! It’s happening again! You’re kickin’ your OWN fat butt… and your body is just pissed off. Now just keep going until your body doesn’t hurt like this anymore.”
(I usually just stop my thought process there, because thinking beyond THIS hurt, and having to start an even MORE rigorous workout one day… quite literally makes me want to throw up) lol.
Here’s the truth…
After 18 weeks of being on a diet/making a lifestyle change, people stop caring if you lose 1 pound a week or 3. All they ask now is… “How much have you lost so far?”
Everyone goes back to eating the same foods they used to, and nobody cares if you can eat what everyone else is having or not. YOU end up being the only one stressing out about EACH pound that you STILL have to lose, and getting frustrated at the fact that you have to eat BEFORE a big party full of yummy, fattening, off-limits to you, foods… just so you won’t be tempted to eat any.
There are more days then not that I catch myself thinking… “This sucks. I just want to give up and go eat an Oreo.” But then I tap into the girl inside who SWORE she would drop the weight this year if it KILLED her, the wife who’s looking forward to wearing things she never could before (like super high heels) for her hubby (without feeling like a potato on toothpicks), and the Mom that will one day feel comfortable wearing a bathing suit with a much smaller cover-up around her, at the pool with her kids.
For me, this weight-loss journey has been SUCH a growing experience. I’m learning to listen to my body, my spirit, and my thoughts, with more clarity then I used to. I know it sounds a little dramatic, and a bit “deep”, but when you finally figure out that YOU are the only one that can make the decision to be angry and give up, or stay positive and keep going, then you quickly learn to start tuning everyone else out… BUT yourself.

Previous Post: « DIY’ing in the Office with Mom – Sanding and Clean Up
Next Post: The House of Smiths 15 Fabulous Fonts! »

Find yourself a ride or die BFF who tells you like