Home / Decorating Tips / A Blogger’s Office Makeover – The Beginning Stages
Here we are again, ready to tackle our next space… and this time, it’s my office! whoo hoo!
I’m beyond excited to FINALLY give this space some MUCH needed attention, so we’ll officially be calling this project:

I mean, I’m in this little room about 90% of my day, so you’d THINK that I would have something better to sit at other then a $29.99 Walmart folding table…(face plant to the palm)… BUT, I don’t.

I actually have some really great scrapbooking storage in this room on one wall, that my Mother-in-law gave me for Christmas a few years back… but since I’m not really a big scrapbooker anymore, it wasn’t serving much of a purpose. The organizational cubes are still in perfect condition, so we’ll actually be putting them into the kids’ play room to organize THEIR papers, crafts, and other art supplies!
Okay, let me back up and start from the beginning, with the big question…
Why all of a sudden an office makeover NOW!?
Well… there were a couple of reasons. But the biggest one, was this: 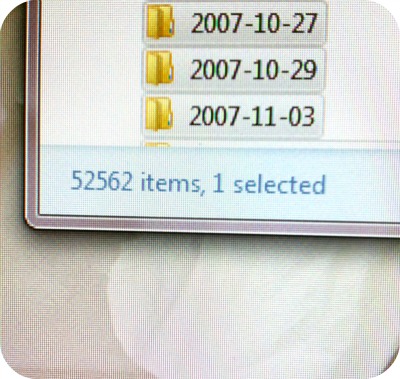 Yup… over 52,000 photos and videos were stored on our little, Costco bought, desktop computer. Ready for the worst part? I had NO external hard drive OR online storage backing up those babies!
(gasp!!!)
And when I say babies… I mean MY baby’s. All of the photos from our kids’ life were stored in this computer, and one day, about a month ago, that 6 year old desktop started acting really funny.
I knew that I needed to do something about my situation, but just kept pushing it to the back burner. Then one night I was working in my office and I had this punch in the gut feeling that literally jumped out at me and said… “DO something about that COMPUTER, or you’re going to regret it!!!”
It was late, about 2am, and it made me so nervous, that I quickly shut off my super-slow-dinosaur-computer, and just went to bed. The next morning I woke up early, got ready for the day and promptly notified Cason that we were buying a new computer today if it killed me! LOL.
Long story short, we ended up having to build a very specific computer for all of my blogging, photo, and designing needs.
(and before any of you ‘apple fans’ make the comment “You should have gotten a Mac”… I have to confess, I’m just a PC girl, through and through. I tried to like Mac’s but it felt like I was attempting to use a computer with boxing gloves on!… No good. ha!) 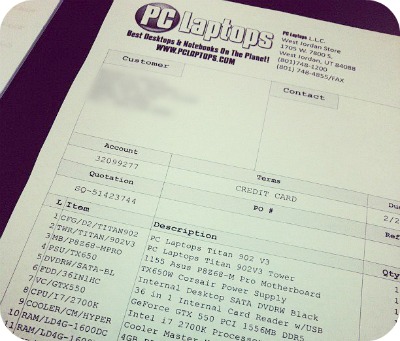 So moving forward, one of those many expensive custom upgrades I made, was having two monitors for me to work with. Yup… it sounds pretty extravagant, right? That’s what I said too, when Cason was using his high-pitched excited voice with raised eyebrows, as he convinced me that TWO monitors would “totally change my life forever!!!”.  HA! I was pretty hesitant about spending the additional cash, but since Cason very rarely shows THAT much excitement… I ended up with the two monitors like he and the sales guy had begged me to suggested.
PS. It’s now been about two weeks into using my new equipment…and even though I definitely don’t think it’s a necessity to have TWO monitors…I have to say, my life HAS changed. (blush) It makes working in multiple programs SO MUCH faster and easier!
Why am I going on and on about this?… because this redonkulous computer, is what set our entire office makeover into overdrive! There was just NO way that I could spend THIS much money on something so nice, and then put it into a sad, dark, un-decorated space!!! (who’s with me?)
🙂
So, the process begins.
We started by taking everything out of the room, wiping down the walls, dusting the baseboards and giving the whole room a super detailed vacuuming, to make sure there was no dust to get in the way when we started our painting process. Thank the heavens for this tiny little Oreck handheld… it made this job about a thousand times faster and easier.
After that was all done, we went in with our putty and filled in any uneven spots, let them dry and then gave them a smooth sanding. 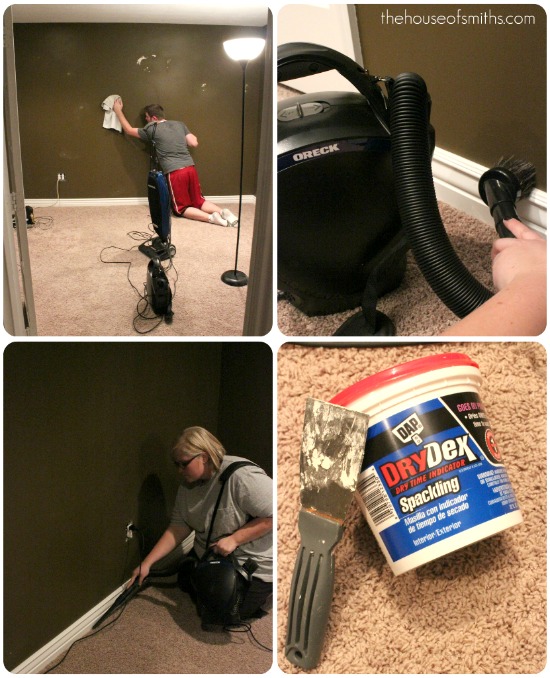 Prepping has got to be the WORST part about any project, but I PROMISE you’ll be SO MUCH happier with the end result if you take the time to properly prepare your space. You can read more about how to prepare your painting space in one of our latest Homes.com articles!
At 10pm, we started on our FIRST coat of primer, and around 2am, we finished the THIRD.
WOW… who’s idea was it to paint this room DARK BROWN in the first place!?
if I only knew then, what I know now… 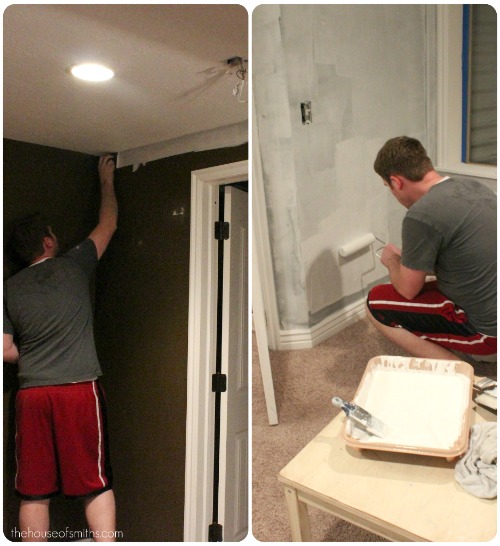 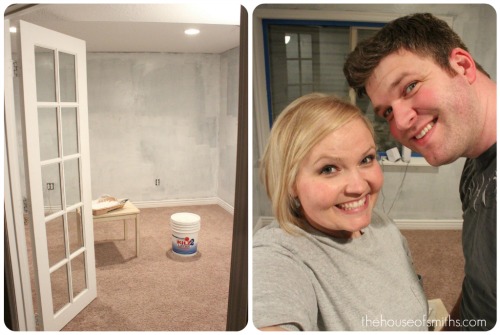 After our room was nicely primed and ready for paint, we headed out the next day to find the PERFECT shade of light gray.
If you’ve ever had to pick out gray paint before, then you probably understand the drama that goes along with it. Finding that TRUE gray, with not too much blue, or even worse… purple! bleehk.
We knew that we loved our medium grey in the front entryway, which was Wood Smoke from Glidden… 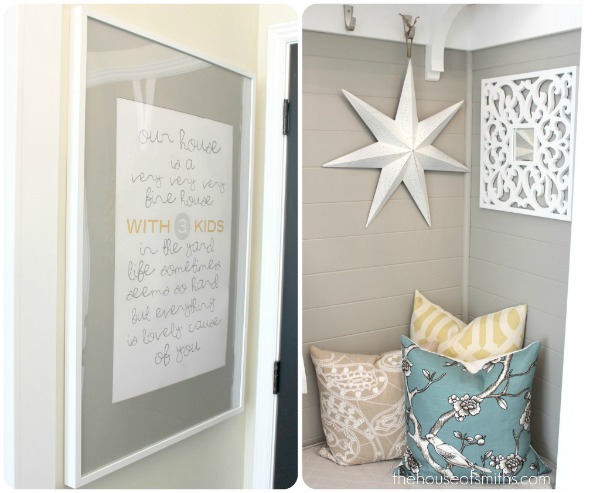 but it was way too dark for this basement office. I wanted a bright, light, airy, fresh gray. (seems like a lot to ask from a paint color, eh?) Nevertheless…armed with a sample swatch of Wood Smoke AND Autumn Haze from Glidden (our houses main color) we headed out to Sherwin Williams, and with the help of a friendly paint expert, we found our PERFECT light gray in no time flat!
REPOSE GRAY – by Sherwin Williams 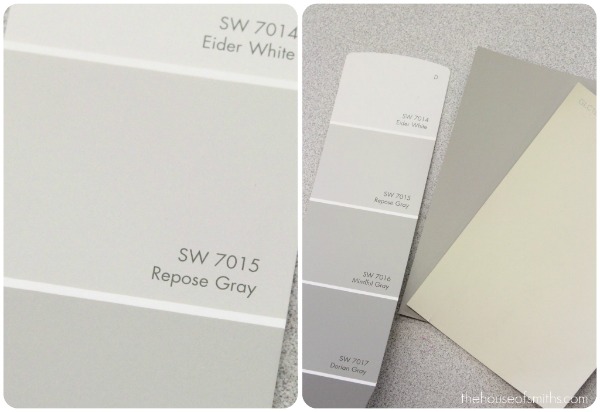 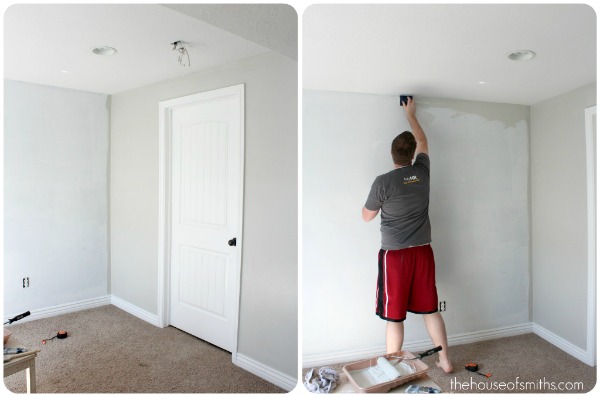 Ahhhhhhhh… can’t you just feel how much more relaxing and happy this space is already!?
I love it!!!
So this is the stage we got to after one weekend. Pretty good, considering those sick kids and ridiculous amounts of primer… grrr.
Since then, I’ve been scouring the internet and stores for some inspirational pieces to get my creative juices flowing, now that it’s time to do “the fun stuff”.
If you’ve been following along on our Facebook page, then you may be aware that I’ve been on quite a shopping kick lately.

Here’s what I’ve come up with so far. A few items that have sparked some new, different, creative ideas for this soon-to-be sanctuary of mine 🙂 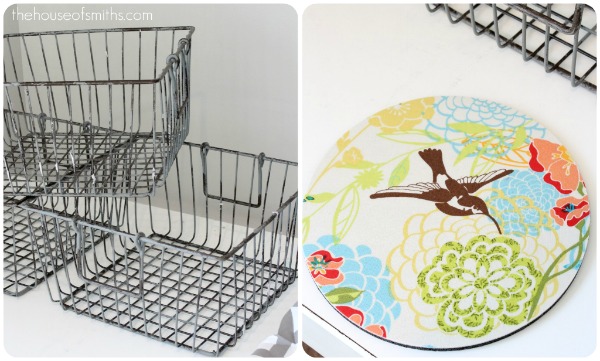 Vintage Wire Baskets – Willow Group on Amazon
Spring Floral Mouse Pad – Gilmore Creations
I’ll be talking some more about where I’m pulling my space inspiration from in our next post.
This office makeover will DEFINITELY take a while, but I’m hoping to bring you along on the journey the whole way! We’ve got plans… BIG plans… like, House of SMITHS plans.
(which really just translates into projects that take lots of time and energy, because ‘SOMEBODY’ has all of these ‘super specific’ visions that have to come across juuuuust right) ha!
I can’t wait to show you more of my ideas and other office developments soon! till then...
Have a Colorful(wink, wink)Day!