If you missed out on our “Surprise MOLD visit”
check it out here.
In order to find out where the leak was coming from we had to do a little prep work.
Take off the closet doors in the playroom, remove nasty wet insulation, and cover all the toys to keep down on the dust.

Then we started cutting away.
Okay, really it was my Dad.  He’s the pro.
I was doing the MOST important job, though.
ME = Flashlight holder-er and Tweeter-er
(ya… I was tweeting about “mold removal 2011″… WHAT?  Someone had to do it!)

We made quite the mess, but ya gotta do, what cha’ gotta do, right?

Next:
Send the MEN in, to do the dirty job…
FIND THE LEAK!

It didn’t take too long to figure out what was wrong, as soon as I was sent upstairs to turn on the shower in our bathroom.

One step on the surrounds floor, and water went dripping everywhere!
Here’s what was happening:
The seal that was put at the base of the drain screw-in, had slowly been exposed to water, each time we took a shower, because the bottom of our surround wasn’t anchored properly…therefor, it would expand and contract, each time we moved around…
Making the “drain, pipe connection” wobbly and exposing the putty to water, and “lessening” it’s anti-leaking power.
Does that make sense?
I’m not gonna lie.
When my Dad pulled down that first piece of drywall in the ceiling I did a little…
“Eeeek!!!!”
All I saw was brown “drippings” on the pipe. 🙁 (bleehhh… I think I’m gonna be sick)
But my Dad assured me that it was just the old plumber’s putty, that had dripped down, due to the leaky water.
Whew!
still looks nasty 🙁

Usually the bottom of a shower surround is held up really well with multiple 2×4’s or cemented in.  But ours was just pretty much, free floatin’!
…
Making that pipe connection wobbly…
the surround a bit squeaky…
and the drain a bit leaky!
(I sound like a Dr. Seuss book)

So heres how “The Guys” fixed the problem:
First Cason and my Dad took the drain apart, cleaned and dried it all up.
Then they used some more, GOOD plumbers putty, and put it down to create a new, better seal.

After that was all done Cason took this “Great Stuff” (literally… lol)
and with that little tube attached, sprayed up this foam (that hardens), to create MORE support under our entire shower, so that it wouldn’t expand and contract anymore, meaning…
No more leaks and MORE importantly… NO . MORE . MOLD!…
yesssssssssss

ew.  that “U” on the bottle looks like………..well, just… ew.
After that was all done, and we made sure it wasn’t going to leak anymore, it was time to,
GET THAT MOLD OUTTA HERE!
My Dad had to head home, but he gave Cason some great tips on how to cut the wall out, right along the studs, so that putting the drywall back in place would be a lot easier, later.
Making sure that when we DO patch everything up, we will have some studs to actually SCREW the new drywall into, instead of just a random hole in the wall.

.
.
Me:  “BOYS!  Chop! Chop!”
“That mold is growing by the minute, and it’s not going to cut ITSELF down!”
Men!  Sidetracked so easily!
Gosh! You would think that “flashlight holder-upper-er” would be enough around here, but apparently I’m a project manager as well!”
jeesh…
🙂 jk jk jk
After a little reminiscing, Cason got right into the action.

He says he wasn’t, but tell me it doesn’t look like he is
“holding HIS noes” in this picture. LOL LOL LOL…
After we got all the damaged wall down we mixed water and bleach into a spray bottle, and cleaned the
“infected areas”. 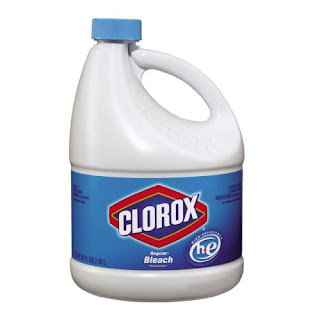 And…
Wa-la!
Mold BE GONE!
So…
I may have a few holes in my walls still, but I’ll take those ANY DAY over the green furry stuff.
Agreed???
🙂
Please excuse the AWFUL photography.
This mold had to come down no matter WHAT the lighting conditions were! lol

Previous Post: « Tutorial: Are you a NO REPLY commenter?
Next Post: Jo Totes: Camera Bags for Ladies! »