Ha!  Yup… this bathroom is  S-L-O-W-L-Y coming along. lol.
Who decides to start a bathroom remodel before Thanksgiving, Christmas, and New Years!?!?
… WE do!.. lol.
In the future… I’m gonna go ahead and say… “It’s probably NOT the best idea.” ha!
I already feel like this “bathroom project” has been draaaagging on…
when really, we’ve only worked on it about 3 times… but have just had to keep pushing our
“plans for finishing portions of it” to the side… due to all the crazy-ness of the holidays and such.

Any-hoo… I thought I would at least show you the small bits that we have finished, to keep you updated on our progress!  And our framed window, above our tub, was what we worked on last 🙂

So, as you can see here in this picture… we’ve got the 1×3 inch wood planks up on the two walls, on either side of the tub.
We knew we wanted to do that FIRST… so that when we put up the chunky frame around the window, we wouldn’t have to worry about working around the frame… and could just set molding on top of the wood slats.
make sense?… 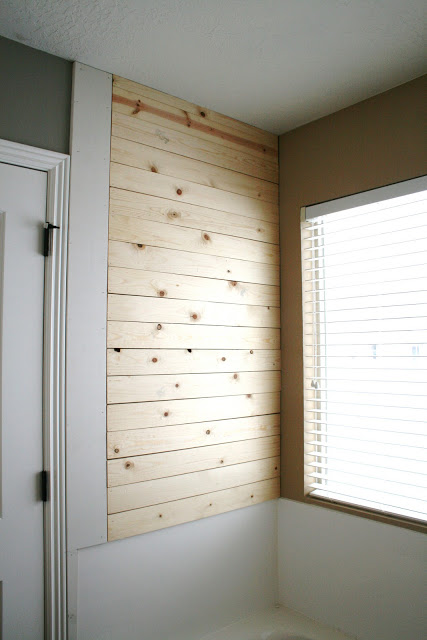 My Dad is kind of our “Master Window Framer”… so he was called in to help us work on a plan for this large picture window project. 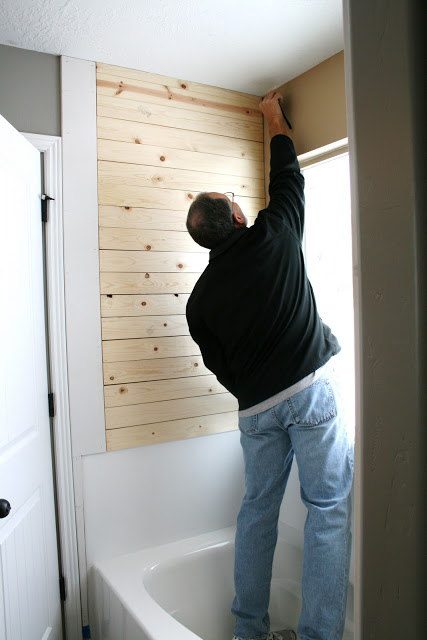 Remember when he helped us with framing out our windows in the bay of our kitchen? 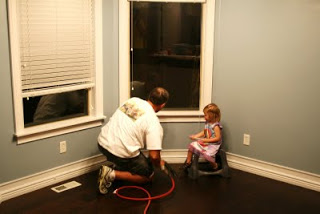 It made such a difference!
When framing out almost ANY window… we usually always start with a 4 inch primed board.
(they sell them at all home improvement stores… and 4 inches always seems to work for our windows, but they sell all size widths.)
Measure out the exact cut that you’ll need for around the window, cut that section out… so it almost looks like a big hat… and then lay it right down on the windows ledge, like so… 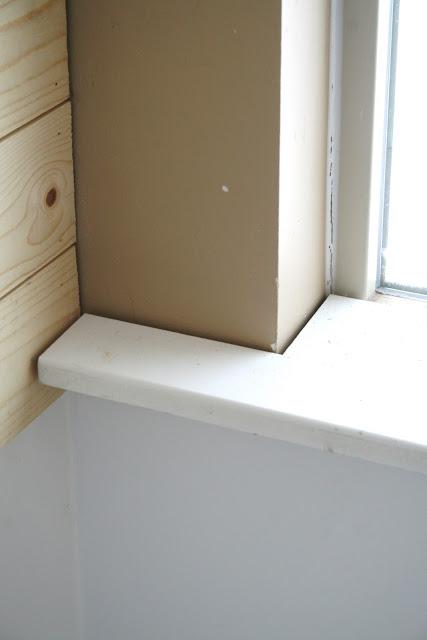 I actually wanted a thicker looking ledge for this window, so Cason just glued a smaller piece of board underneath our already cut board… to “chunky it up” a bit.
Later I’ll go in, and sand it down, and fill in the gap, to make it look like one piece. 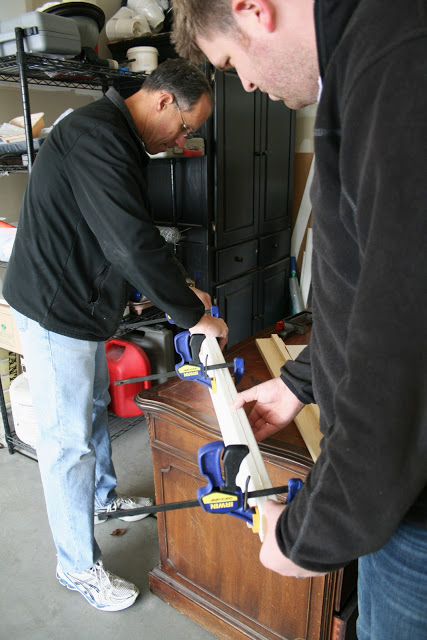 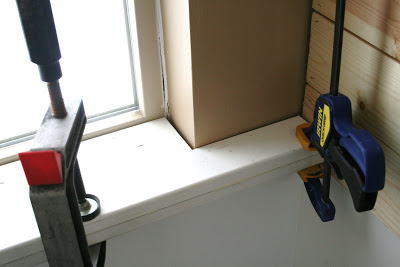 Okay… so as soon as your base is in place… you can start doing the fun stuff 🙂
This is when you need to establish what kind of molding and framing technique you want to use on your window.
I have gotten a LOT of my inspiration from this great book I picked up at Lowe’s for about $20 bucks.
I felt like it was a little bit of a splurge, at the time… but once I got home and REALLY sat down with it, and flipped through the pages, I realized how quickly my $20 dollars turned into an investment.
There are a LOT of great rooms, molding ideas, and designs in this book that I’m pulling from, for areas of my own home!  Definitely worth the $$$. 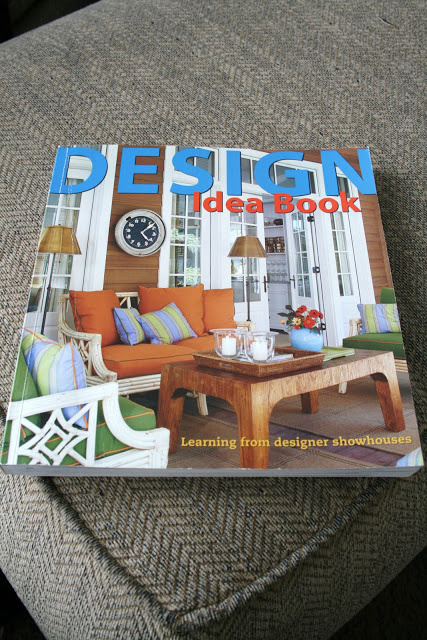 Okay… so I know this isn’t the greatest picture in the world, but here is the photo, in my book, that I’m pulling my inspiration from, for my bathroom window.
I love the simplicity of it.  Although we’re not going “beachy” in OUR bathroom… I think that this frame type would work well for LOTS of different design styles!

For our supplies we picked up a few 6 inch boards and some brick molding.
My Dad had the brilliant idea to actually nail the piece of brick molding to the boards FIRST… so that we only had to make our 45 degree angle cuts, ONCE… instead of twice… for each set of boards.
…Genius 🙂 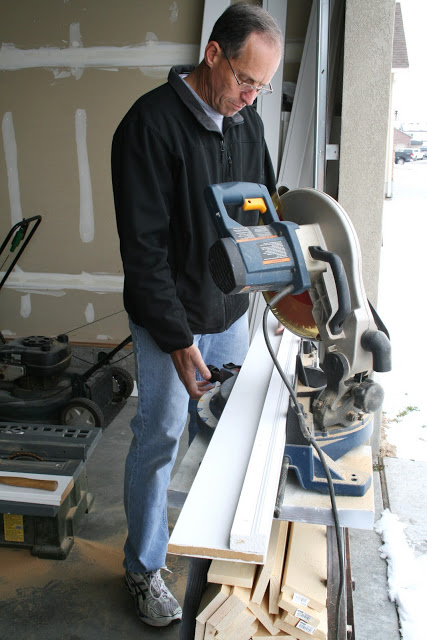 So we cut the boards together… like this, in one big piece. 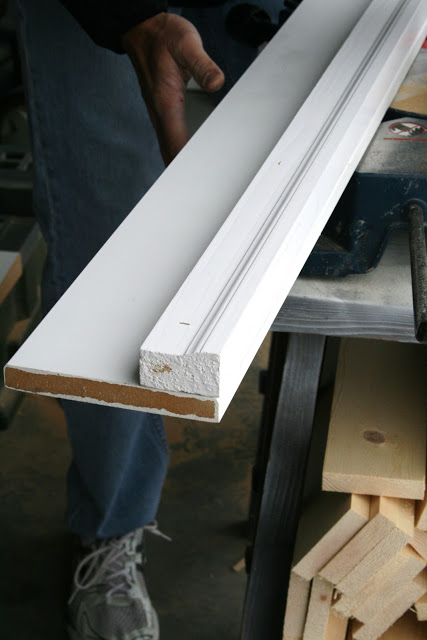 So that when we adhered the molding to the wall, it was only 3 big pieces, instead of 6. 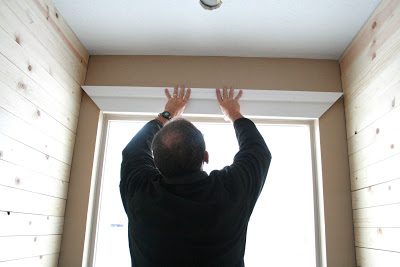 Make sure you use a level for that top piece… to make sure everything lines up well. 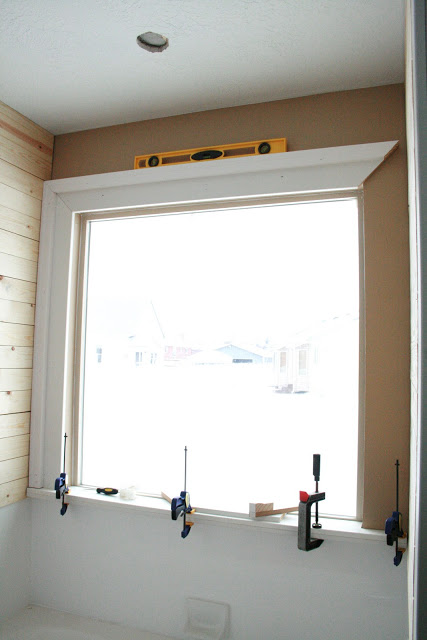 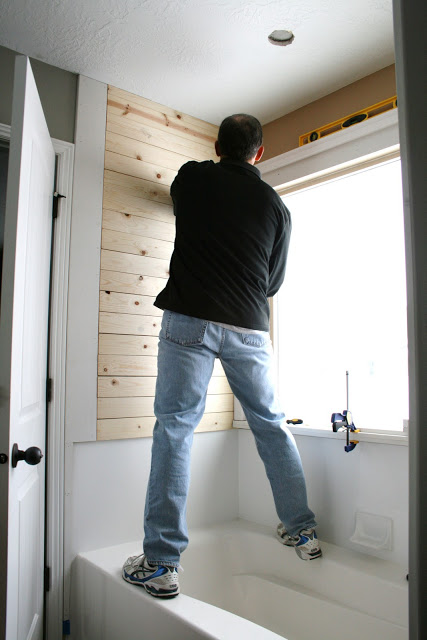 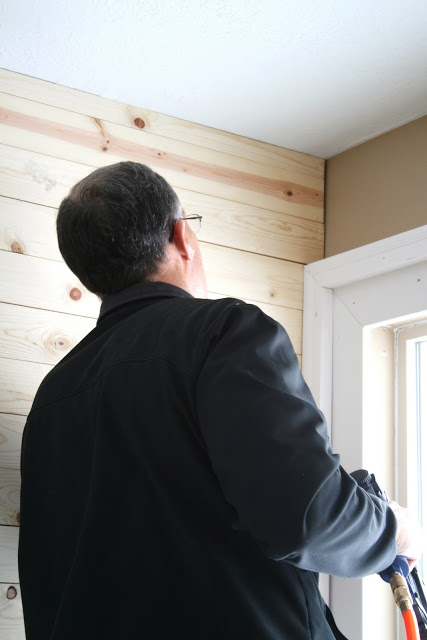 Okay… this is where we ran into a bump in the road.
Remember when we talked about how our awesome builders actually put the window in, off centered from the tub?
Well… if you’re not framing a window out, then it’s not that big of a deal… but if you are…
then it’s a pain!
In order to keep the window looking semetrical, we put up the molding around the window the same on all sides… but then were left with this gaping space.
Really… it’s not a HUGE deal… because no one will really see it… being that it is on the backside of the molding… but we want to fill in the wall space with more slat boards, and we didn’t want to have to cut small pieces to go in that uneven empty space. 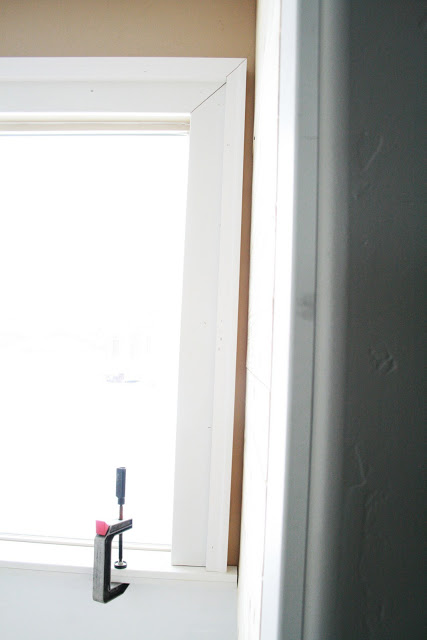 So instead… we used a piece of scrap wood, the same thickness as the slat boards, and some liquid nails, to fill in the space, so it didn’t look awkward. 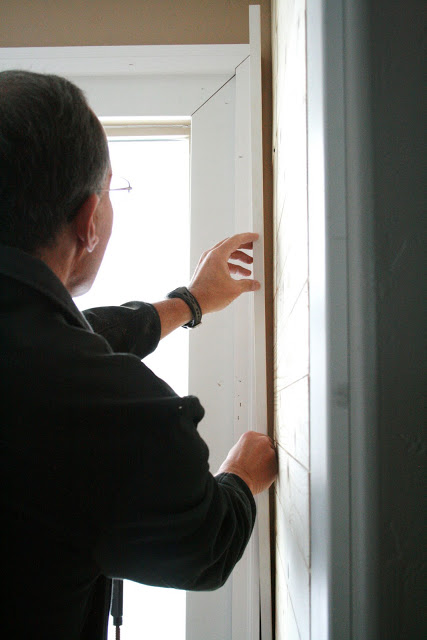 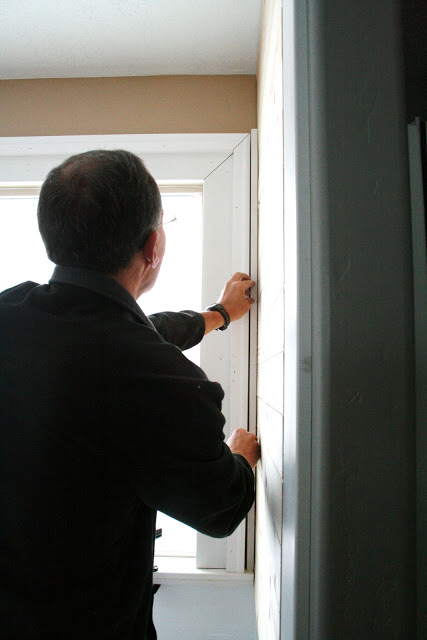 Like so.
I promise it won’t look as weird when we caulk and paint it all… but for now, it does loos kind of funny. 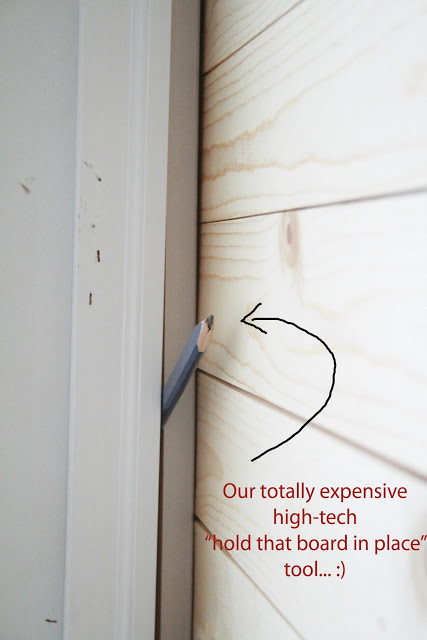 So… close up, here’s what we’ve got.
The Inside of the dry walled windows will get a coat of white semi-gloss paint, along with the window molding.
I’m thinking I want to paint the slats satin or eggshell white, so they aren’t TOO shiny. 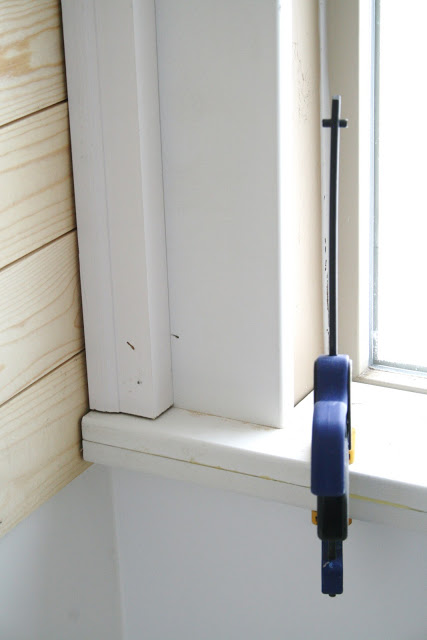 This is what the big picture looks like.
Still LOTS of filling, caulking, and sanding to go.
And we also have to finish putting up the last few planks above the window, with a piece of quarter round on the top… between the ceiling and boards… to finish it off. 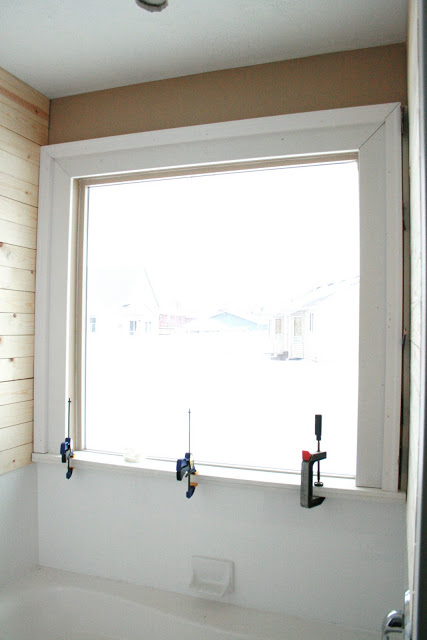 I think it looks a bit “sauna – ish” right now. LOL… with the wood planks NOT painted… so hopefully I’ll get the look I’m going for, once everything is painted white, and we have a really neat lighting fixture over the tub!
(more on lighting, for this bathroom later…)
We’re getting excited!… it’s coming together… and we’re getting closer to our “vision” that we originally had in mind!
… Now if I could just find a maid and chef… to do all my OTHER work… then life would be goooood 🙂