Home / Decorating / The Tale of the “Sunglassed” Skull Decal
Once upon a time…
There was a skull decal.
It originally was placed, here, below… in a womans Halloween display.
Neatly hanging in this empty space on a simple piece of distressed cardboard. 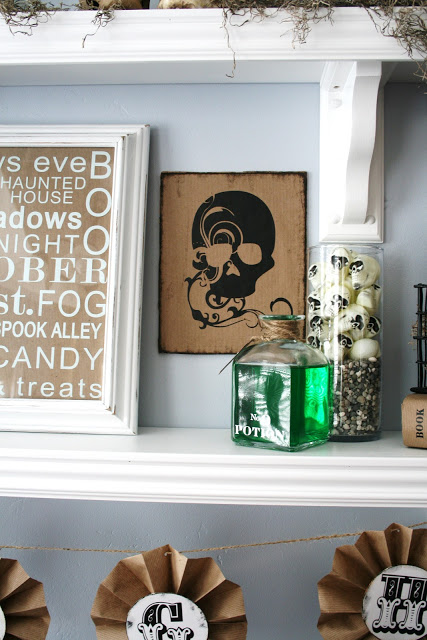 The “designer” of the “pretty creepy skull” display was very proud!
Thinking… “What a fun way to add a “whimsical” feel to Halloween!”
Success! 🙂
But THEN…………
…her HUSBAND came home.
.
.
.
He took a long look at the skull decal,
during the couples Cafe’ Rio Salads gourmet dinner she had prepared them,
rolled his eyes and said…
“I’m SORRY… but why is your skull head thingy wearing
SUNGLASSES!?
It’s bugging the crap out of me!” 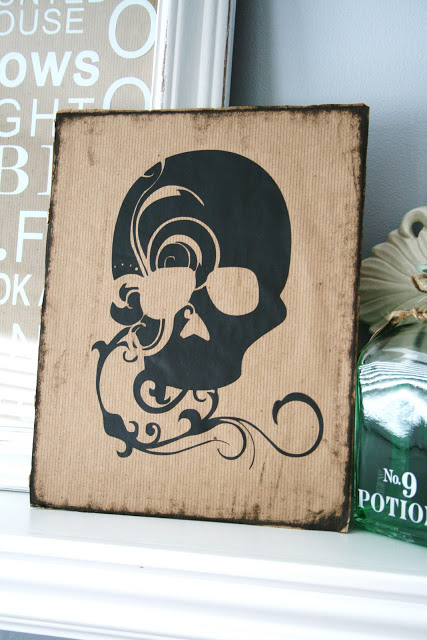 At FIRST the woman was kind of pleased… that the husband had even NOTICED the new decor addition, and then SHOCKED that he had the NERVE to question her creative talents!!!
hee hee
After a ridiculously long argument small conversation over whether or not the skull should
stay or go…
The “designer” finally won … FULLY convincing her opponent that there was
NO WAY…
that those skulls’ eyes looked even CLOSE to sunglasses!!!!!!
.
.
.
she lied
.
.
.
but so did HE, when he told her…
“ya, you’re right, it looks fine“ 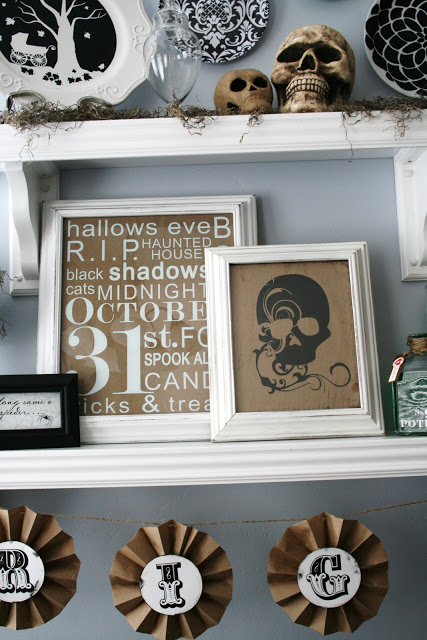 .
.
.
On “Picture Day” the “skull” didn’t make the cut.
No matter HOW cute “the skulls” new white frame, that she had made for it, was…
…the skull indeed… had sunglasses 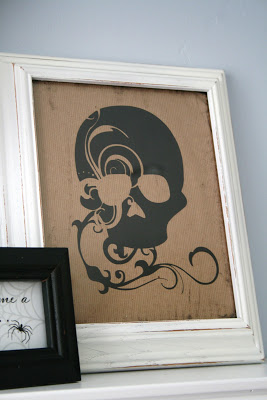 The woman was mad that the husband was right.
only because he can appear SO COCKY when giving her that…
“I-told-you-so, look”
Ooo… you just want to smack that smirk RIGHT off him!
…he says that he has NO IDEA what “LOOK” she is referring to ………….PSHHH!
And she actually only felt the STING of sweet revenge when the husband emailed her, from work, a blown up FINAL photo from the womans Halloween post…  with an empty circle in the spot where the “skull” SHOULD have been… with a simple “question mark” in the middle.
.
.
.
UHG!
.
.
.
Moral of the story???
.
.
.
ANYTHING can look like it’s wearing sunglasses if you black out their face, and hallow out their eyes…
Am I wrong?????

CASE AND POINT…
I think not.
🙂
.
.
.
Time spent on skull project – 20 minutes
Woman feeling like she’s won the STUPIDEST disagreement in the history of couples entire marriage
by publicly posting her opinions, for others to comment on – 30 minutes
Husband walking into their home everyday, only to be greeted by the “sunglassed skull head” that once “bugged him”
… NOW in their entryway…….. 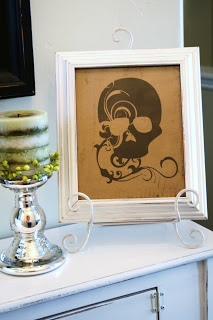 …PRICELESS
🙂
I love you husband, even if you DO think my once thought, cool
Halloween skull looks like it’s wearing sunglasses.
*side note… there were no actual arguments during this post… mostly just playful banter 🙂
Gotta keep those silly flirtatious vibes alive somehow… eh?

Find yourself a ride or die BFF who tells you like