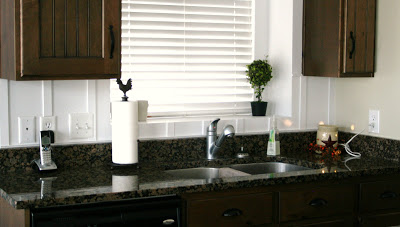 Why is it so freakin’ hard to actually FINISH a project all the way!?!?
Oh wait… I know…because it usually ends up taking 10 times longer and being 100 times more expensive, then you originally planed! ha.
We still have a whole lot of work to do on the pop out kitchen window (especially after our little change of plans) but hey… the actual BACKSPLASH part is finished!!
I have to say, that besides about 3 or 4 cuts… I did this whole… “Slat backsplash” by-my-self!
Big accomplishment for ME… but now Cason thinks I should at least TRY to tackle the rest of my jobs SOLO first… and THEN ask for help. ha! Not gonna happen…

Let’s be real, the whole reason that I ended up doing almost everything on my own, was because Cason and and I started fighting about HOW this project was going to get done… So I just get quiet and angry, and most of the time, just say….
“FINE! I’ll just figure it out and do it ON MY OWN!”
Hmmm… Sounds more like my almost 4 year olds… but now this raises another question.  I read all these blogs and NOBODY ever talks about how THEY fight with their spouses, while doing home improvements… Why is that?
Because I can count at least 5 little tiffs that we’ve gotten in, while doing all this hard work!
Seriously… are we the only ones who get heated about which method to use to put up wood slats, or how many coats of paint should go up on a wall?
blahh… anyway….
Here are the pictures of
our backsplash journey. lol.
First we got this small piece of trim and put it up by the granite. That way we had a finished look. We secured those by using finishing nails. 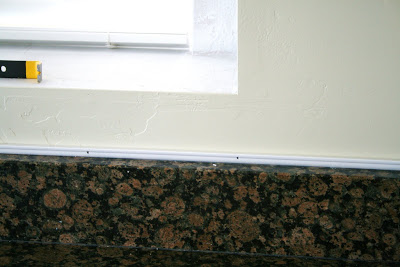 Then this is where the fighting started. lol. We had to do some simple math, so that all the slats were at the right distance from each other and spaced out correctly. Cason wanted to do all these fancy equations, and I said… screw it, just stick some tape on the back of those babies and space them out, where they LOOK right, and then figure out, about how far apart they are… and measure from there. (this made a lot more sense, only because we were trying to make as FEW cuts as possible, and miss about 3 outlets. Trust me… this way was better. LOL LOL. Yes.. I’m stubborn.)
K, so Cason quit shortly after that, I learned how to use the saw and liquid nails, on my own. ha.
So after I taped them up, and then measured out the right spots, I took a pencil and marked where the slats went back, and started taking them off one by one and gluing them up. I didn’t want to use finishing nails, because then you would see all the little holes in them… no matter how much putty you try to use. The liquid nails DID a great job! 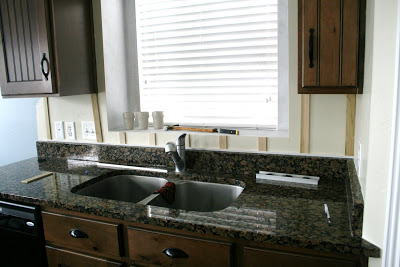 Ooo, Make sure if you do this to use a level. I almost forgot! 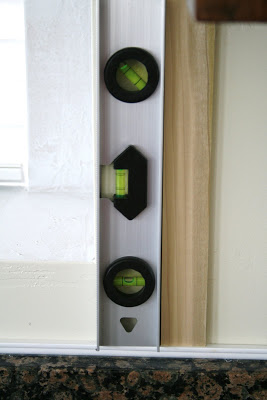 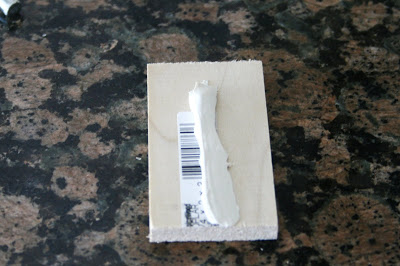 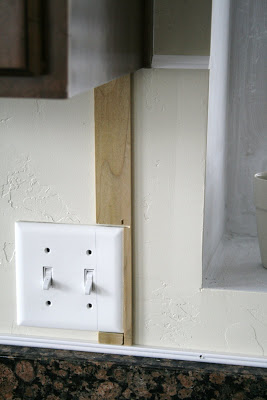 blah… see this piece… yikes… I had to use some MAJOR putty action on that guy! 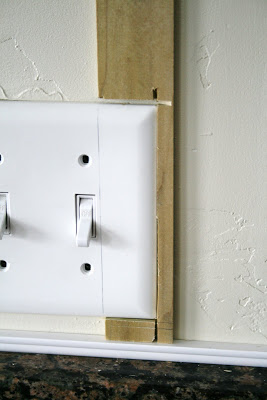 This was the small piece of trim that we used on the top of the backsplash. We have other plans for the top half 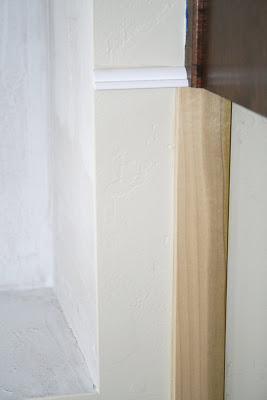 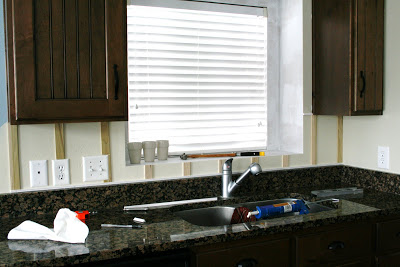 Finished!!… Man I need some decorating going on in here!!
I’m thinking that once I have my stuff up, it won’t look so stark. 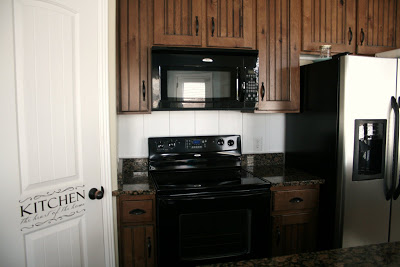 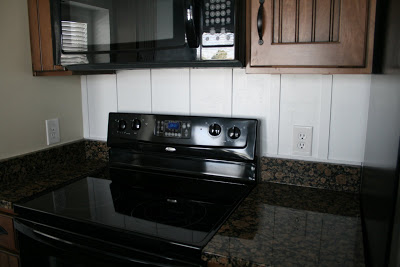 Mmm.. K…. Here’s the WHOLE thing. Anyone see what’s wrong with this picture!? 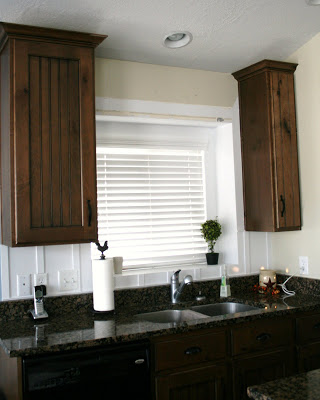 Here… let me get closer to the problem for ya.
See, we had a piece of trim up there but ended up not loving it, so down it came…Along with ALL the drywall!!!!!!!!!!
AHHH!
I don’t even KNOW where to start when I see metal peeping through a wall! LOL
I wanted to put some white distressed tin tiles up there, but they are expensive. So I’m going to take another rout, and am SO excited to see how it turns out.
Can’t wait to show ya! 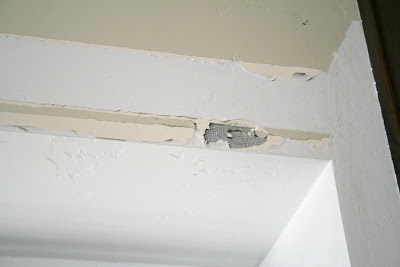 {Inspiration}
My inspiration for this project came from
Funky Junk Interiors!
She has some GREAT stuff, and this Board and Batten backsplash looked GREAT in her kitchen, so naturally… I copied! lol. You HAVE to go check out her blog, if you already haven’t.
I put my strips a little closer together to give it more of a cottag-y look, but definitely the same idea!
Thanks so much Donna!