Whew! Are you guys ready for this? Good!
I’m not gonna lie, I sort of feel like I’m sharing a deep, dark secret by showing you our basement and telling you the real story behind it all. You’ll see more why a little later on.
Nevertheless, it’s got to be done, so here we go…
Welcome to our first basement walk-through in our home. 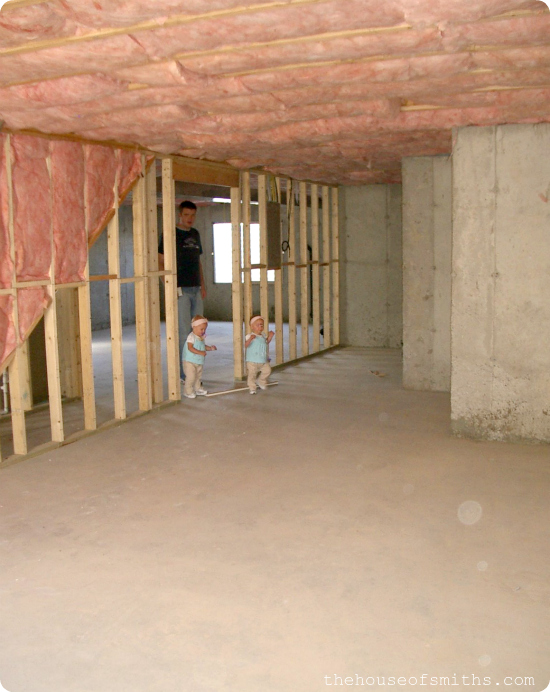 Yup, we were just babies havin’ babies when we built our first (and current) house 6 years ago. 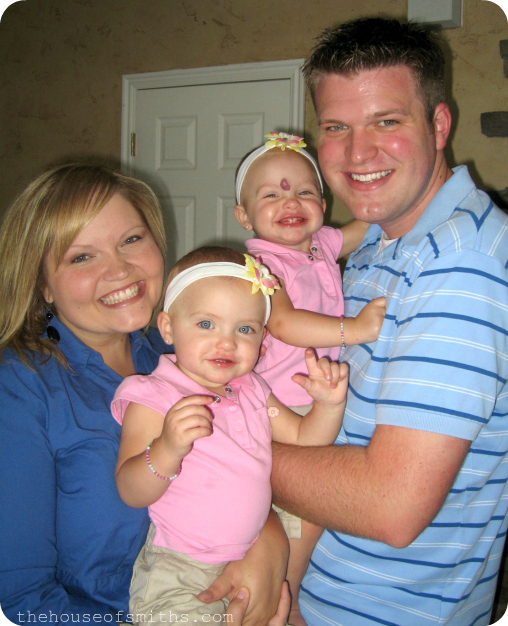 Wait, let me back up for a second to give you some perspective on how things have actually gone down for us and our house history over the past 8 years.
Our VERY first “house”, right after getting married was a basement apartment in a really old home that Cason’s Dad owned, that we both helped remodel and build. (who knew that DIY’ing homes was going to be a constant life-long job/hobby for us!?!?) We don’t even have photos, so I had to google map it, but you get the idea… and yes, it looks like a cave. ( felt like one too) 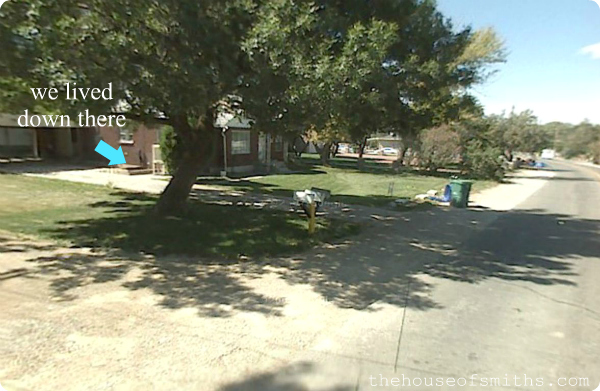 It was infested with spiders ALL the time, the shower had a really yucky smell that would seep up through the drain, so we would neatly place a toilet plunger over it after showering, the windows leaked when there were big rain storms and Cason had to duck down a lot, just to get through the door jams and one of the hallways. BUT, we were in total marital bliss, so to us, it was perfect.
🙂
Our second house felt like a mansion compared to the first, yet it only had two small bedrooms with a shared hall bathroom, a tiny kitchen with about 3 cupboards and a small living room. We loved it though! 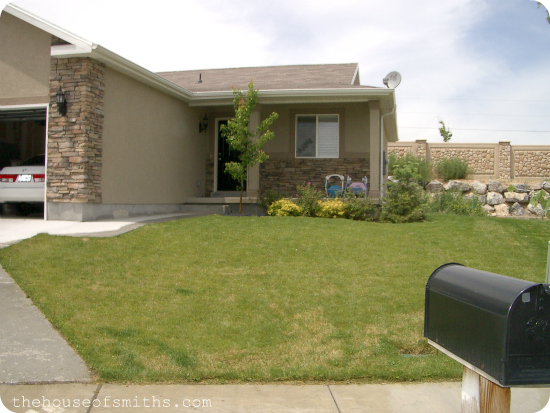 Honestly, we planned on staying there for a while, but then about 2 seconds later, we found out we were pregnant with our third. We COULD have made it work, but wanted a bit more upstairs space with three kids. The market was AWESOME, so we finished the basement, redecorated it and then sold our second house about 18 months later, for almost twice as much as we bought it for… hence the good fortune we had when it came around to buying (building) the home we live in now! 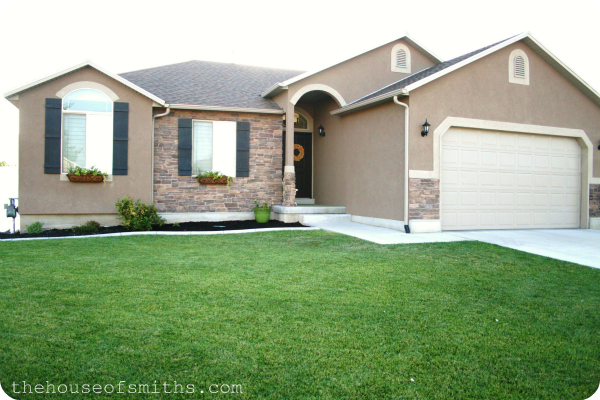 For those of you who aren’t familiar with basement living, here in Utah basements are typically peoples “downstairs”, especially if you live in a rambler-style home like we do. Even though you’re below ground level, the ceilings are usually nice and high and the windows still bring in tons of light.
That being said, it’s also really common to buy or build houses with UNfinished basements; mostly because people find that they’re just too expensive to finish off once they’ve completed the upstairs.
This was our case. We built our house, completely finished the upstairs and then about a year later went back and started finishing our basement, so we could have almost double our living space. 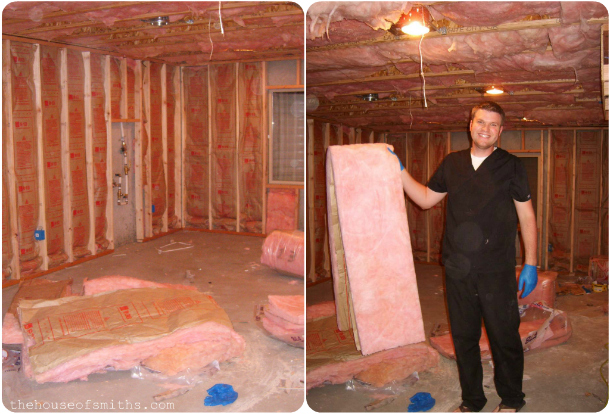 Cason and my Dad drafted up how everything was going to be laid out, then we hired a friend to come frame, Cason installed all the insulation and after that we had professionals drywall and mud.
All the finishing work was done by our Dads, Cason and his brothers. Let’s just say it was a big team effort. ha! 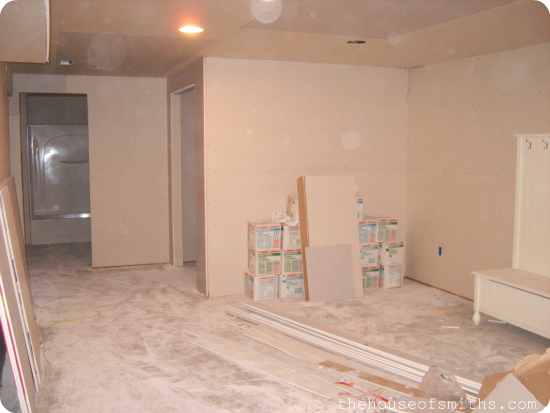 One of the biggest changes that we made to the basement was knocking out the small door at the bottom of the landing. This was about 5 years ago, so please excuse the not-so-great pictures. You get the idea, right?
🙂
It really opens things up and makes the house look a lot more cohesive; like one big space, instead of two different areas.

I also found this picture of Cason and I priming our basement (for the first time in 2008) and well, as we were repainting it last week, at one o’clock in the morning, we couldn’t help but try to reenact it, through some grainy, badly lit photos. 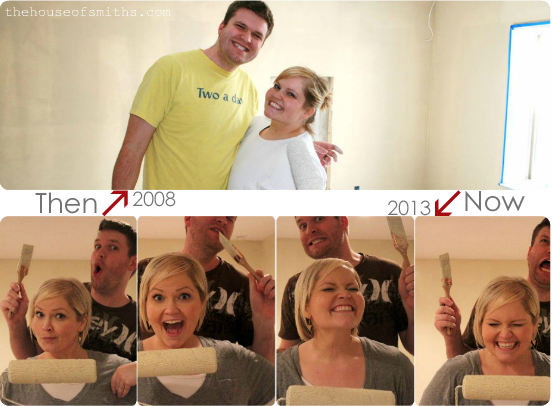 What’s the saying? “Older and wiser… more mature with age” (?)
Hmm…
To be fair, Cason had the clicker for the camera and right before each shot he would make a ridiculously, loud sound effect. At first I was trying to get him to be serious, but obviously my efforts failed and we ended up with most of the pictures looking like this… men.
Why is everything so much funnier when you’re super tired and it’s after midnight?
Aaaanyway, in the end, our basement looked like this! 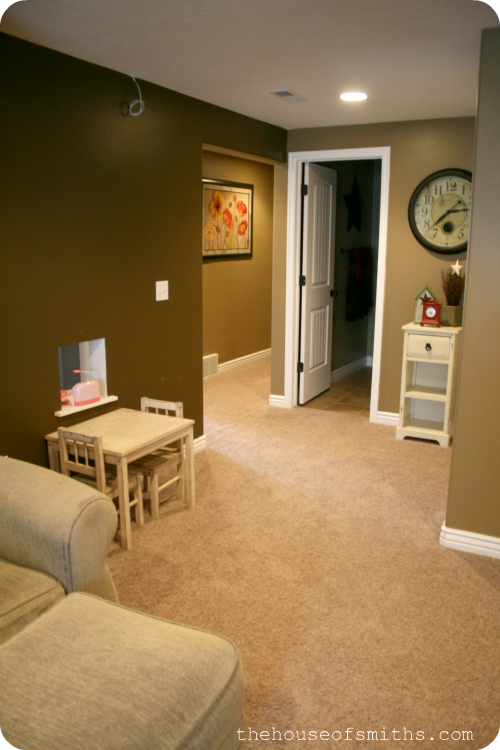 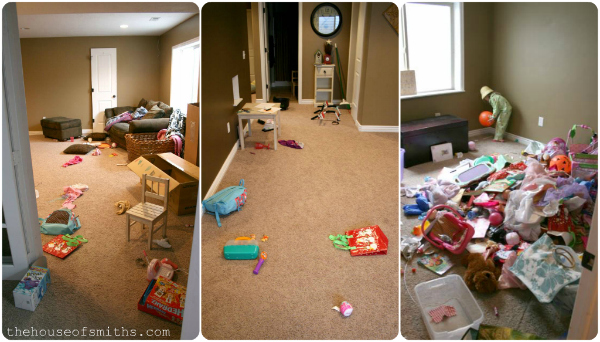 You guys! It was ALWAYS messy! We’ve spent so much time and money working on the upstairs, that the kids and their toys just took over down here, completely! We actually referred to the basement as “The Toy Graveyard” at one point. ack!
THIS is why I feel like I’m telling a big, deep, dark secret to all of you. I mean, it’s never been a “secret” but I would always just giggle behind my computer when someone left a comment like: “Your house always looks so clean, how do you do it!?” or “Wow, don’t you EVER have mess in your house with three kids!?”… Well, now you know! Of COURSE we do! The only reason it’s always been pretty easy for us to keep the upstairs tidy and toy-free, is because we had a big ol’ space downstairs for all of our kiddos’ things!
Now that our girls are getting a little older and in school most of the day, we’ve realized that the amount of toys has gone way down and we’re dealing with more art supplies, papers and books instead; something that we’re both really excited about. To be honest, we both could never get into the idea of converting an entire space into a “toy room” because we just felt that it was a waste of time! We knew our kids would grow out of it so fast, and in only a couple of years we’d have to turn around and change it into a pre-teen hangout space or extra bedroom. The only thing that we DID regret, was not designating a good system for storing toys… but ya live and ya learn, right?
Now we’re in this stage. 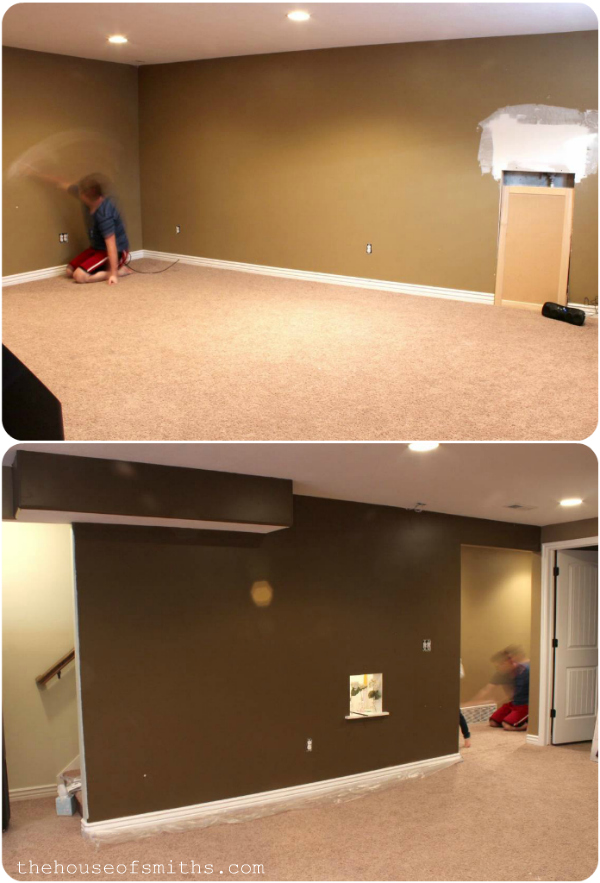 We sold all of our big, hand-me-down furniture last year at our garage sale, so thankfully we didn’t have to deal with moving any of that this time around, but we did have to haul an old big, bulky TV up the stairs.
After giving everything a good wipe-down we started priming away. 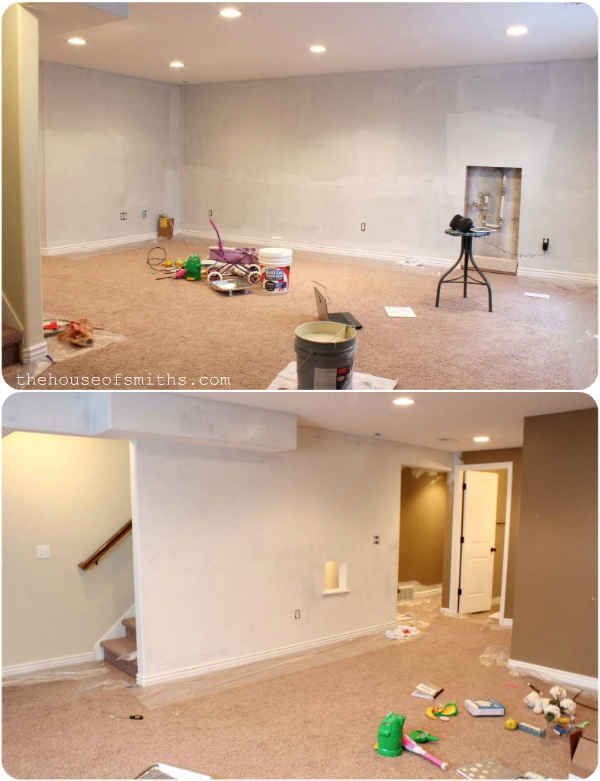 We’ve decided that we want our upstairs and downstairs to flow really well, so we’re painting the whole thing the same color that we love so much upstairs… Autumn Haze by Glidden.
I posted the above picture (of that primed wall) to our Instagram feed a few days back and tons of you wanted to know what that little window was. 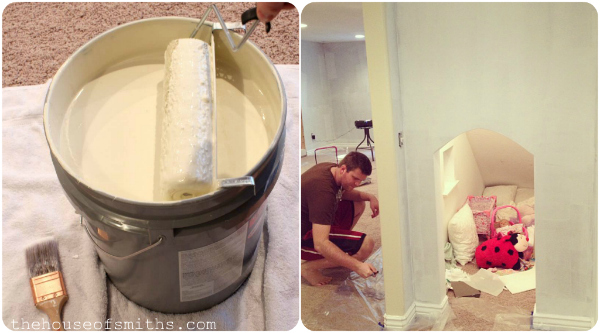 Hopefully this explains it much better.
As you can see, under the stairs, instead of just closing it off or adding a little door for another unfinished storage space, we arched out the wall in the front, added a window to the side and made it into a little kid playhouse!
The girls have LOVED it, and now (as you can see in the picture on the right) tend to use it more for reading, coloring and playing “house” with their baby dolls. I’m actually surprised at how MUCH they use it!

So to wrap things up for this first post, we’ve finished painting all the walls Autumn Haze and now have windows, door casings and baseboards to finish off. blaaah. They were actually NEVER really finished or painted, only primed, so we had to go back, fill in little nail holes, sand them and THEN paint. Just in case you’re wondering, that kind of stuff is the monotonous, boring part to DIY’ing… but someone’s got to do it!
🙂 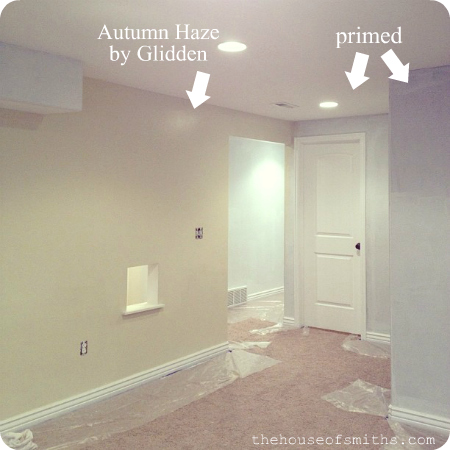