Home / Kitchen / DIY Wood Planked Walls Tutorial
We’re continuing to make progress on our kitchen re-style, and have decided to finally embark on a project that we’ve been wanting to do for a while now; planking our kitchen nook in clean, crisp, evenly spaced, white boards. We’re finally done and LOVE the results, check it out!!! 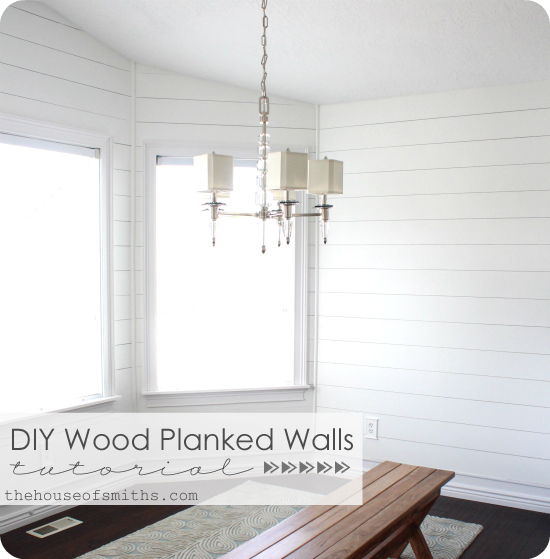 As I’ve mentioned before, we have absolutely loved our Ballard Design inspired shelves that we built for our kitchen and change them out with almost every holiday and season. They basically act as sort of a mantel, because we don’t have one. 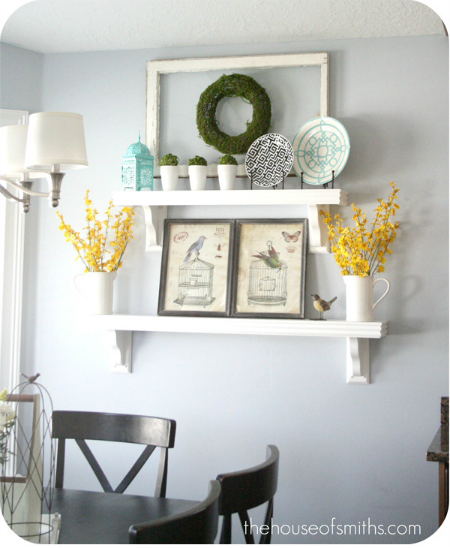 That being said, once we started making changes in our kitchen, we knew that this wood planked wall project was going to be part of it too. Originally the kitchen nook was painted Upward by Sherwin Williams. It’s a REALLY good gray-blue and we loved it, but were ready for a change. My friend and fellow blogger, Sausha from Sweet Pickin’s wrote a great tutorial on this wall paneling technique not too long ago, so I wasn’t planning on posting mine in such detail, until I realized that we did a few things a bit differently; and also had a couple of tips and tricks of our own we wanted to share.
So, here’s how we did ours:
To get the wall prepared we took our shelves down, patched the wall, and then gave it two good coats of primer. Even though we were planking the walls we knew that we were going to have spaces between each piece of wood and didn’t want to take the chance of any blue wall showing through the slats later on. Looking back, I’m SO glad we did this because you COULD see through the gaps quite a bit. 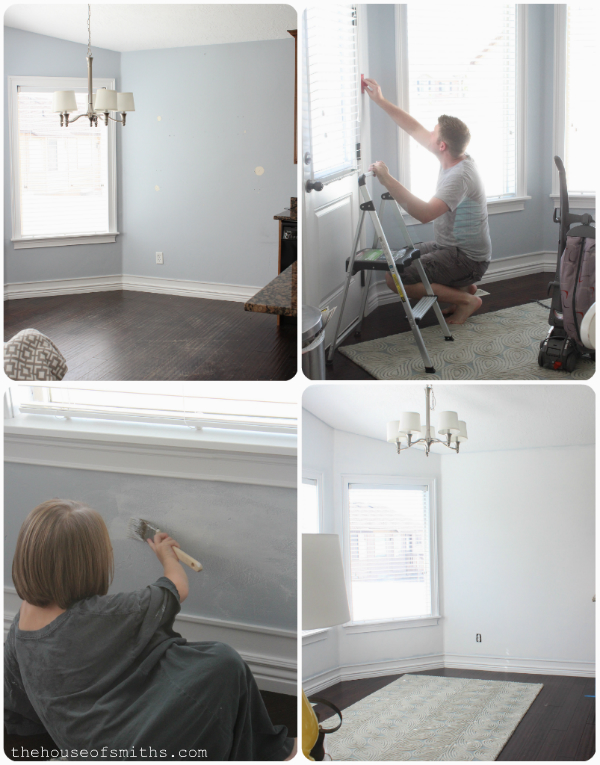 Next, Cason measured the walls to get an estimate of how much wood we’d need to get for the space. 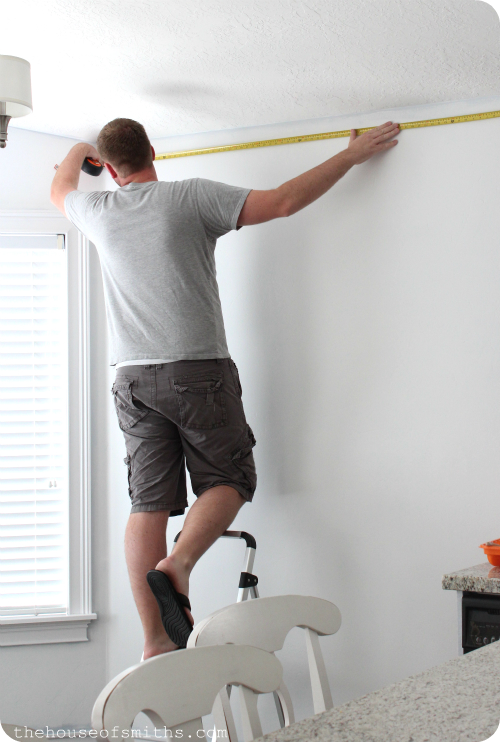 Just like Sausha did, we went to Lowe’s and purchased about 4 sheets of the 4×8 paint-ready utility plywood and had Lowe’s cut them into 6 inch strips, length wise. We paid about $3.00 extra to have all the cuts made for us but it was WELL worth it! After we brought them home we quickly sanded down the edges where there were any splinters or rough spots from the cuts. 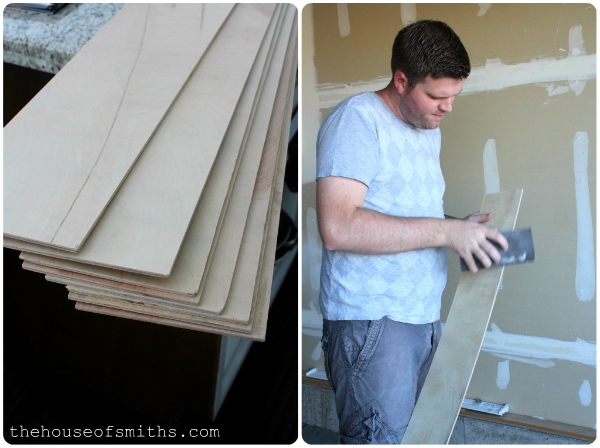 Then, really, the only thing we needed was a nail gun, finishing nails, a level and 2 nickles. 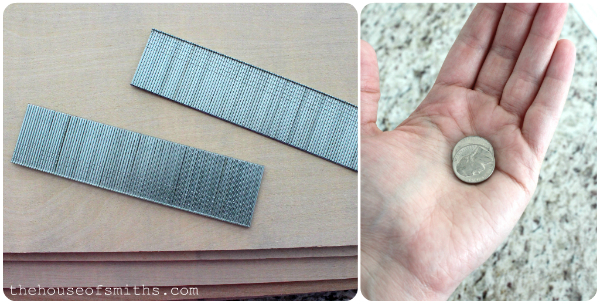 Because our ceiling (like most peoples, actually) isn’t level, we made sure the first board was completely straight and level with the wall, leaving a bit of an uneven gap along the top, that later we would simply fill in with white caulk. It’s important that your FIRST board is level, because if not, then your whole wall may appear lopsided or crooked in the end. 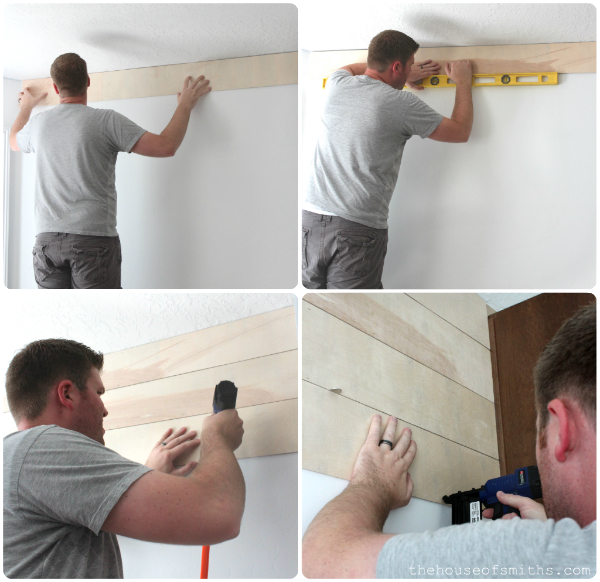 Once that first board was up, everything moved pretty quickly. We wanted our boards to be more uniform and evenly spaced apart, verses scattered. To ensure that we had the same space between each board we used a couple of nickles as guides and wedged them into the empty space, before we nailed up the next plank. It worked like a charm! 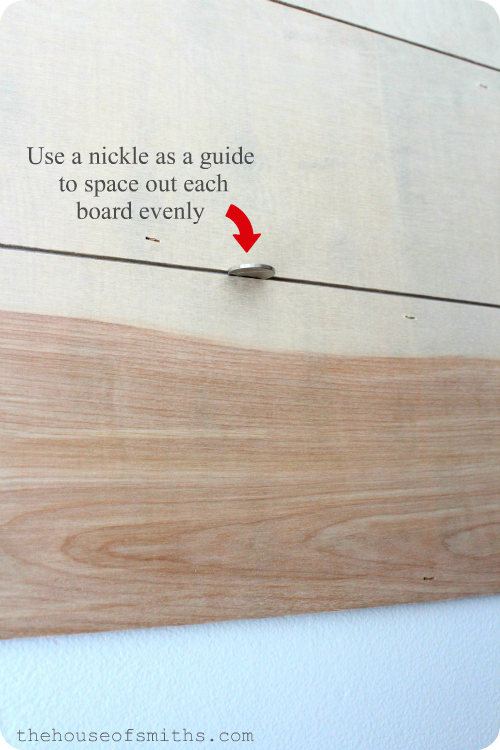 Just to make sure we were still on track and everything was staying straight, we used our level to check the boards every few minutes. Better safe than sorry, eh? 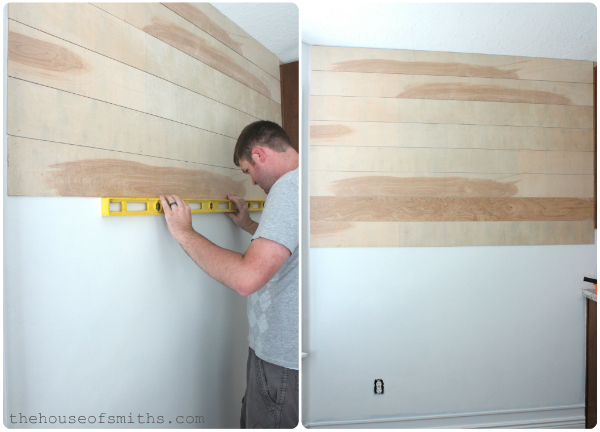 Our larger, straight wall was super easy and only took about 20 minutes to finish, but once it came to the walls where the windows and door were, things got a little trickier. To cut a few of the pieces into the shapes we needed, we used our multi-functional vibrating tool. We also used some computer paper taped together to make a template for the very top piece, so that we wouldn’t mess up, because that cut was extra tricky. 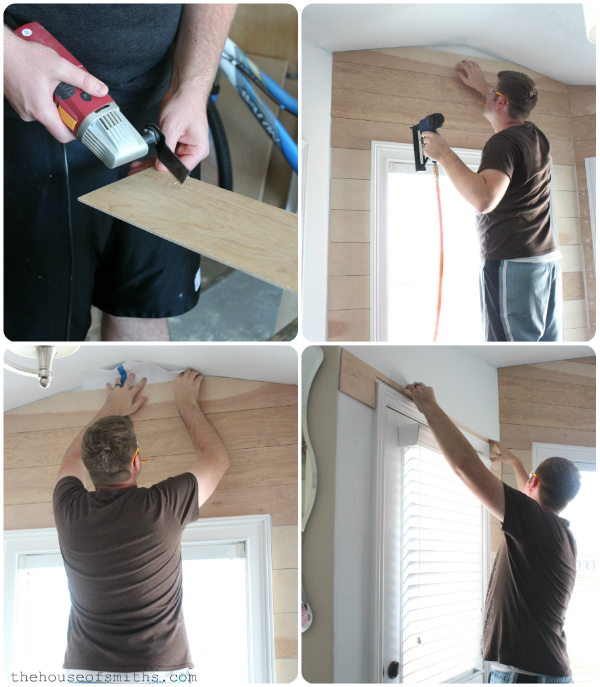 When it came to placing the boards around our outlets, again, we used our multi-functional tool to cut out a spot for them. Another thing that I thought might be helpful to know, is that when placing the board around the outlet it may sink the outlet in too much, so you’ll have to take a screw driver and unscrew the fixture a bit, to get it to pop out a little. This makes it possible for you to be able to place an outlet cover on it later.

Oh! And make sure to cut the power off before this step too. Metal + electricity = shocking results.
🙂 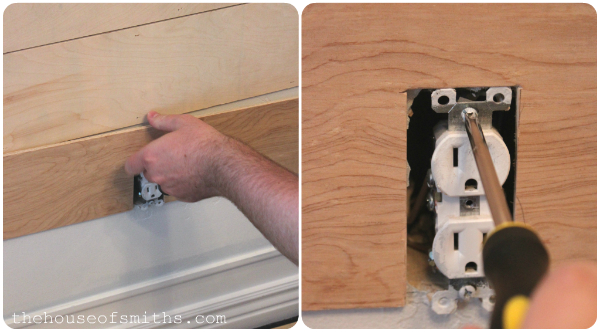 Once all the boards were up Cason went through with a nail setting tool and sunk in any of the finishing nails that were sticking out, so I could patch them. 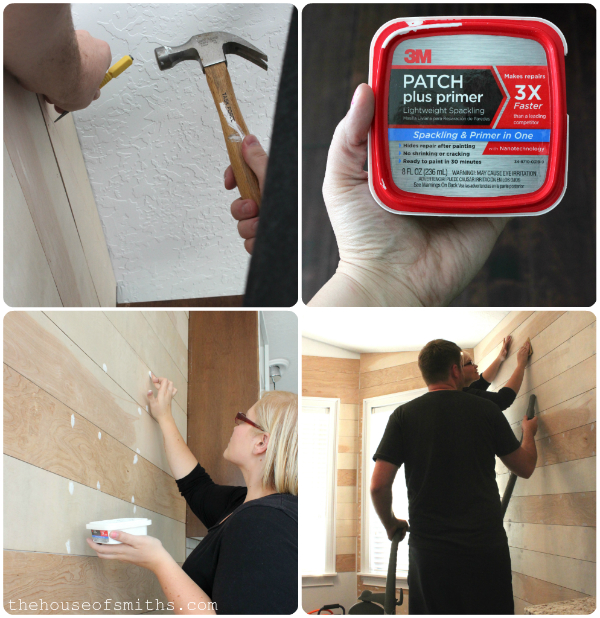 After everything was all patched up and dried, we took turns sanding everything smooth and holding the vacuum hose.
🙂

Super-fine putty dust flying all over is the WORST to clean, so we try to suck up the bulk of it with our vacuum first. We’re kind of DIY-clean freak-dorks that way. LOL 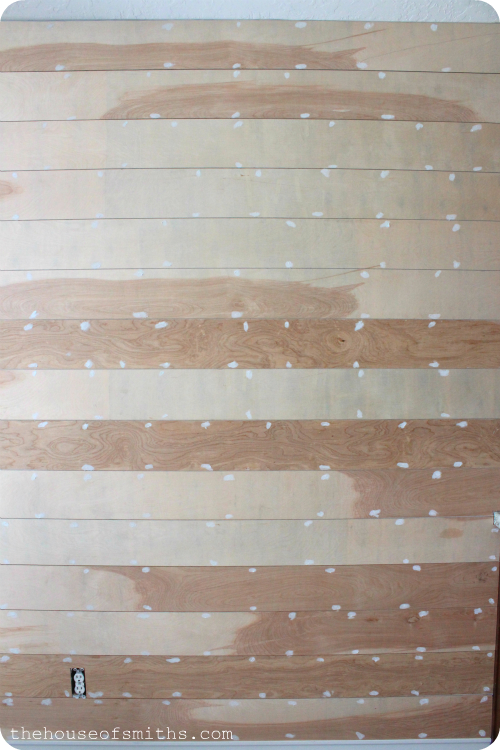 To finish off our vertical seams where our walls met up, we used a few pieces of quarter round. For the one edge near the door that divided the planked wall and the living room wall, we used a piece of finishing panel molding that had a lip underneath that snuggled up to the planks really well. 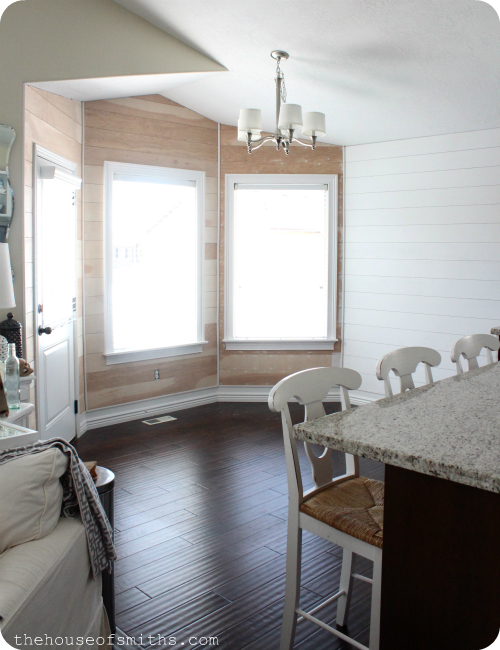 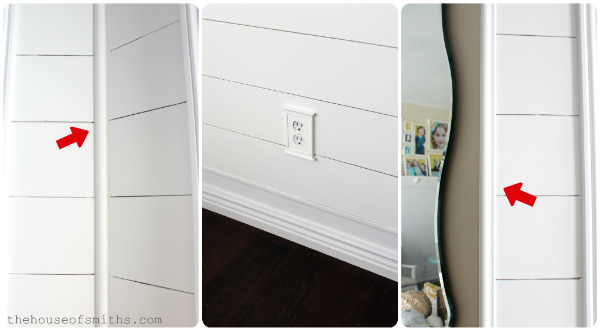 After everything was painted semi-gloss white, Cason went in with latex caulk and filled in any uneven gaps or seams that we didn’t want showing. It may not seem like a very necessary step, but I promise, it finishes off the whole thing really well. 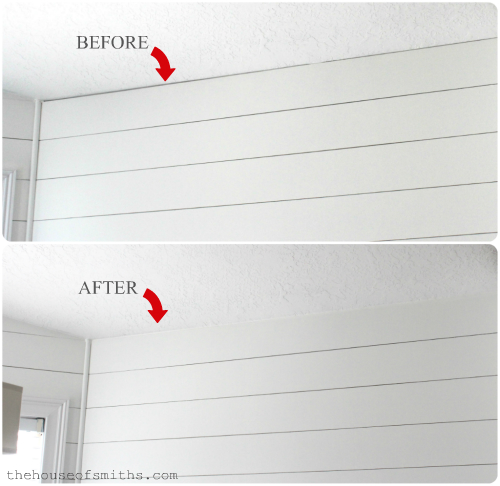 We also changed out our lighting fixture to one that was a bit more modern and that had some crystal elements, to “glam-up” this space a bit more. We purchased it from Joss & Main a few months back, for about half the price it normally goes for. Score! 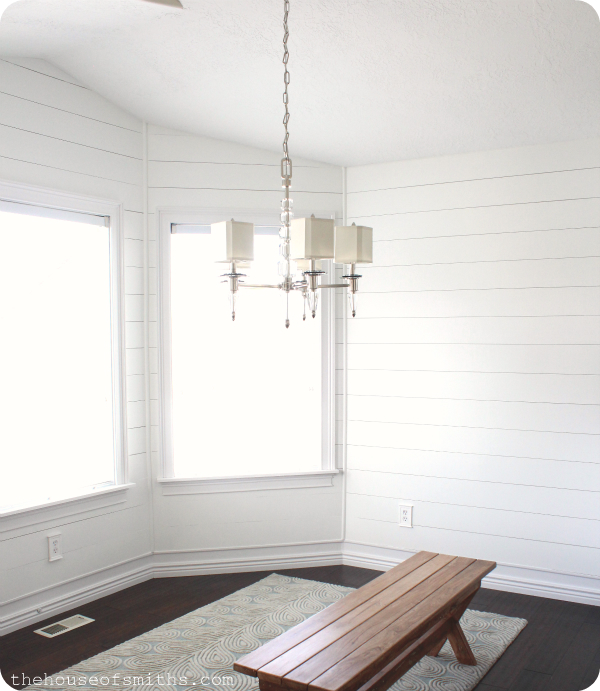 Like I said before, we LOVE the finished product and can’t even believe how much larger the space looks now that it’s all planked and painted white; we’re so glad we moved forward with everything and decided to do it. The whole project costed us about $50, but we had nails, paint, putty and caulk already. If you had to buy everything… I would say that you could do it for about $80 – $90 easy! 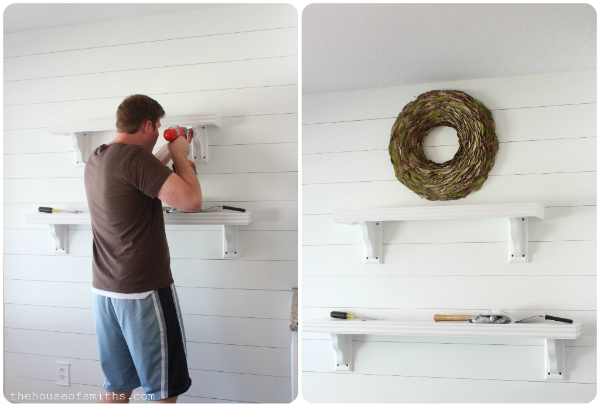 Of course after the building part of any project is done, MY favorite step comes in… decorating it! Cason was awesome and got my trusty shelves right back up on the wall as soon as possible, so I could start sprucing things up for Thanksgiving!