Home / Life / Finding the Strength to Keep Going – My Weight Loss Journey Continues
Friday marked 13 weeks into my new lifestyle change. As I head into week 14, I thought I’d share some more thoughts and a little update about how things have been going.
First, I have to be totally honest… week 11 and 12 were probably some of my most frustrating to date (well, with the exception of the 2nd and 3rd week… when I felt like I literally would have given my right arm for just a small dose of carbs). Remember my “awesome 30lb loss” that I was so proud of? Well, I guess that my body wanted me to REALLY appreciate it, because for almost two weeks after my post… I was just STUCK at that 30lb mark. 🙁
I was doing EVERYTHING right! I even switched to having fish instead of chicken or beef for dinners at night, thinking that it would be better and “less heavy” for when I slept and processed my food, ha! Matt (my amazing lifestyle coach) gave me the advice, on week 11 to change up my workout a bit, and do one day a week where my cardio went 45 minutes to 1 hour. (instead of the regular 26 or so minutes of interval type cardio that I was doing every time) in hopes of kick-starting things up again.
I didn’t weigh myself until the end of week 12 and STILL I was stuck, only losing ounces, instead of pounds. Aaahhrrrrg!
I had been really swamped with all of our show shooting and family obligations, so I didn’t actually go in and see Matt these two weeks. (big mistake) I just did a few phone ‘check-ups’ with him…and really, I was feeling kind of like a failure without his usual motivating words and healthy living lessons. PLUS, I had just posted about being so inspired and driven, and now my stupid body just STOPS consistently losing weight!? What the CRAP!?
I remember one morning coming home from the gym with a “this sucks attitude” after a just “okay” workout session, (you know, the ones where you don’t push yourself as hard as you KNOW you can go, and end up feeling like you might as well have just stayed in bed and gotten the extra sleep instead?) when I met Cason in the garage, as he was headed out for work. He hugged me and said, “You’re doing SO good. Don’t get frustrated.” Of course, it sent me into bawling hysterics. (in case you’re wondering, this weight loss stuff can make a person QUITE emotional. Maybe carbs help absorb tears?, because I don’t remember crying as much before. hmm.)
Really… he was right. I KNEW this wasn’t going to be easy by ANY means. It took me 29 years to pack on this weight, and I was well aware that it wouldn’t all come off in the matter of 3 months, but let me tell ya, when you don’t see any change on the scale at the end of a 6 day work out week… you definitely start to lose that “weight-loss high”.

I made a commitment. I was NOT giving up. I would just have to work harder and keep going. This last week and a half, I have really pushed myself and found my second wind. 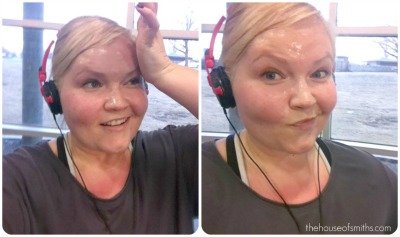 (yikes… sweat much?)
I don’t know if it was out of anger, because I’m sick of being overweight, or if it’s because I’m naturally stubborn and I refuse to fail this time around… but whatever it was, I ROCKED that gym AND my body!… slapped it right upside the head, kicked it’s butt and FINALLY yesterday, blew right past my 30lb mark!!!
Like a total nerd, once I got home from the gym that day, I snapped these pictures of myself on my phone, so I could always have them to remember how GREAT it feels, if you JUST KEEP GOING!

Yup… that’s inner-elbow-crease sweat in the last picture on my shirt. That’s how I roll.
🙂
Some weeks/days/moments are easier then others. Sometimes finding the strength to give up the things I WANT, for the things that I know my body NEEDS, is really hard.
(especially during candy-heavy holidays) 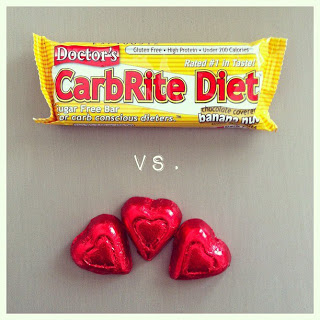 Not a day goes by that I don’t wish for a slice of pizza in place of that grilled chicken, or a big frosted brownie, instead of a piece of sugar-free candy…But it’s the moments when you realized that you officially weigh less then you did on your wedding day, or that you can now comfortably sit on the ground and play with your kids better, that make all of those stupid cravings and insignificant thoughts of not being strong enough… just disappear.
Losing 3 pounds in a week will ALWAYS feel better then losing none, this is just a fact. But making the decision to give up or keep going when those discouraging moments happen, will have to be the choice that you make, when doing anything in your life that you FEEL is impossible. 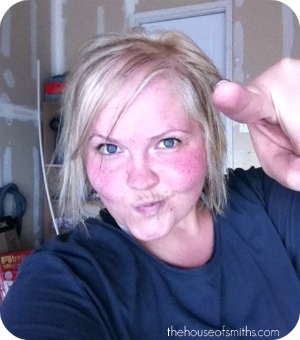 *** Thanks for stickin’ through all of the ridiculous self-portraits. Don’t worry… in the future, you’ll be seeing less and less of me… literally. (hardy-har-har). Okay… I’m stopping now.